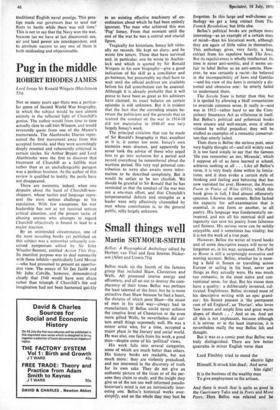 Pug in the middle

Lord Ismay Sir Ronald Wingate (Hutchinson 55s) Not so many years ago there was a particu- lar genre of Second World War biography, in which the subject would be seen almost entirely in the reflected light of Churchill's genius. The author would from time to time actually dare to call him Winston, and would reverently quote from one of the Master's memoranda. The Alanbrooke Diaries repre- sented the first movement away from this accepted formula, and they were accordingly deeply resented and vehemently criticised in certain circles. Sir Arthur Bryant and Lord Alanbrooke were the first to discover that treatment of Churchill as a fallible man rather than as an unchallengeable paragon was a perilous business. As the author of this review is qualified to testify, the perils have not disappeared.

There are moments, indeed, when one despairs about the band of Churchill-wor- shippers, whose tactics and language repre- sent the most serious challenge to his reputation. With few exceptions, his war leadership has not as yet received serious critical attention, and the present tactic of abusing anyone who attempts to regard Churchill objectively is bound to lead to a major reaction.

By an unintended circumstance, one of the most revealing books yet published on this subject was a somewhat unhappily con- ceived symposium edited by Sir John Wheeler-Bennett, entitled Action This Day. Its manifest purpose was to deal summarily with those infidels—particularly Lord Moran —who had presumed to present an unortho- dox view. The essays of Sir Ian Jacob and Mr John Colville, however, demonstrated clearly that 1940 would have seen chaos rather than triumph if Churchill's fire and imagination had not been harnessed quickly to an existing effective machinery of co- ordination about which he had been entirely ignorant. The man who achieved this was `Pug' Ismay. From that moment until the end of the war he was a central and crucial figure.

Tragically for historians, Ismay left virtu- ally no records. He kept no diary, and he wrote few letters. Those that have survived and, in particular, one he wrote to Auchin- leck and which is quoted by Sir Ronald Wingate in his new biography—give a good indication of his skill as a conciliator and go-between, but presumably we shall have to wait until the official archives are available before his full contribution can be assessed. Although it is, already probable that it will prove to have been as great as his admirers have claimed, its exact balance on certain episodes is still unknown. But it is evident that the fact that the corroding strains be- tween the politicians and the generals that so scarred the conduct of the war in 1914-18 did not materialise in 1940-45 was very largely Ismay's work.

The principal criticism that can be made of Sir Ronald's biography is that, excellent as it is, it comes too soon. Ismay's own memoirs were discreet, and apparently he never took the advice of those who urged him to go into seclusion for a period and record everything he remembered about the wartime period. His very real personal con= tribution to NATO also awaits more infor- mation to be described completely. But it would be unfair to be too churlish. We should be grateful to Sir Ronald that he has reminded us that the conduct of the war was not a one-man effort, and that Churchill's temperamental defects and _ strengths as a leader were only effectively channelled by men whose contribution is, to the general public, stilly largely unknown.