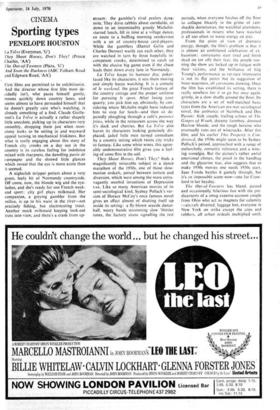 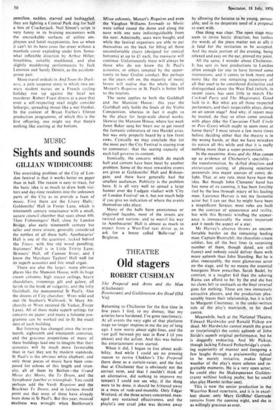 La Treve (Everyman, 'U') They Shoot Horses, Don't They? (Prince Charles, 'AA') - The Out-of-Towners (Plaza, V') And Soon the Darkness (ABC Fulham Road and Edgware Road, 'AA') First films are permitted to be exhibitionist. And the director whose first film most de- cidedly isn't, who paces himself gently, moons quirkily down country lanes, and seems almost to have persuaded himself that he doesn't greatly care who's watching, is already something of a find. Claude Guille- mot's La Treve is actually a rather shapely little anecdote, picking up its characters very smoothly, dropping them just when mon- otony looks to be setting in and wayward appeal turning to mechanical friskiness. But what is really engaging about this story of French city crooks on a day out in the country is its careless feeling for indolence mixed with sharpness, the dawdling partie de campagne and the shrewd little glances which reveal that the eye is more acute than it seemed.

A nightclub stripper potters about a very green, leafy bit of Normandy countryside. Off come, now, the blonde wig and the eye- lashes, and she's ready for one French week- end sport: city girl plays milkmaid. Her companion, a greying gambler from the milieu, is up to his waist in the river—not precisely fishing, but electrocuting trout. Another mock milkmaid keeping look-out trots into view, and there's a crash from up-

stream: the gambler's rival prefers dyna- mite. They drive rabbits about cornfields, sit down to an interminably greedy Michelin- starred lunch, fill in time at a village dance, en route to a baffling morning rendezvous with a set of country-house card-players. While the gamblers (Daniel Gelin and Charles Denner) warily eye each other, they are watched in turn by three hopefully in- competent crooks, determined to catch up with the elusive big game even if the chase leads them down every lane in Normandy.

La Trhe keeps its humour dry; poker- faced like its characters, it sets them moving and simply keeps watching. It is a comedy of le weekend, the great French fantasy of the country cottage and the proper uniform for . pursuing le sport. After losing your quarry, you pick him up, obviously, by con- sidering where Michelin might have induced him to stop for lunch—and then sit de- jectedly ploughing through a café's pommes (rites, while in the restaurant across the way it's duck and cherries. But La Trilve also leaves its characters looking genuinely dis- placed, jaded little men turned comedians by a country setting which twists city tricks to fantasy. Like some white wines, this agree- ably undemonstrative film gives you a feel- ing of some flint in the soil.

They Shoot Horses, Don't They? finds a magnificently miserable subject in a dance marathon of the 1930s, one of those slow- motion ordeals, poised between torture and diversion, which were among the more extra- vagantly morbid inventions of Depression UNA. Like so many American movies of its semi-sociological kind, Sydney Pollack's ver- sion of Horace McCoy's once famous novel gives an effect almost of shutting itself up inside its setting: a fly-blown seaside dance- hall, weary bands strumming slow 'thirties tunes, the factory sirens signalling the rest

periods, when everyone lurches off the floor to collapse blearily in the grime of ram- shackle dormitories, the watchful attendants, professionals in misery who have watched it all too often to waste energy on pity.

From the point of view of dramatic energy, though, the film's problem is that it is almost an embittered celebration of ex- haustion: contestants start tired and finish dead on (or off) their feet; the people run- ning the show are locked up in fatique with their victims, and the brilliance of Gig Young's performance as rat-race impresario is not its flip patter but its suggestion of bone-weariness, all corrosions showing. Once the film has established its setting, there is really nowhere for it to go but once again, grimly, in a slow shuffle around the floor. Its characters are a set of well-matched basic types from the American pre-war sociological novel, the ambience of Steinbeck and Dos Passos: hick couple, trailing echoes of The Grapes of Wrath, dreamy farmboy, dimmed Harlow blonde, and the tough heroine who eventually runs out of wisecracks. After this film, and his earlier This Property is Con- demned, the 1930s might seem to he Sydney Pollack's period, approached with a range of melancholy, romantic reference and a winc- ing nostalgia. But the picture's rather awful emotional climax, the pistol in the handbag and the glycerine tear, also suggests that to make 1930s movies one needs 1930s stars. Jane Fonda battles it gamely through, but it's an impossible scene now—one for Craw- ford in her heyday.

The Out-of-Towners has bland, pained and occasionally hilarious fun with the pre- dicaments of a smug expense-account couple from Ohio who act as magnets for calamity —aircraft diverted, luggage lost, everyone in New York on strike except the cops and robbers, all urban ordeals multiplied until,

penniless, sodden, starved and bedraggled, they are fighting a Central Park dog for 'half a box of Crackerjack. Neil Simon's script is very funny in its bruising encounters with the uncrackable surfaces of airline em- ployees and hotel receptionists, less so when it can't let its hero cross the street without a manhole cover exploding under him. Some- what inflexible direction by Arthur Hiller, breathless, suitably maddened, and also slightly maddening performances by Jack Lemmon and Sandy Dennis, as the accident- prone pair.

More travel ordeals in And Soon the Dark- ness, a pale suspense story in which two un- wary student nurses on a French cycling holiday run up against the local sex murderer. Robert Fuest directs at a pace that even a self-respecting snail might consider lethargic, spreading threat like a wet blanket. In the context of Bryan Forbes's Elstree production programme, of which this is the first offspring, one might say that there's nothing like starting at the bottom.