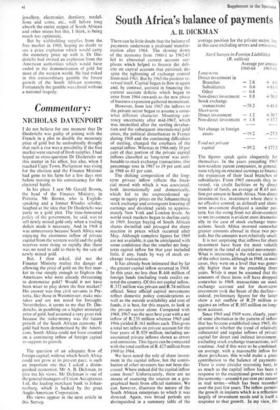 I do not believe for one moment that Dr Diederichs was guilty of joining with the French in a plot to double the monetary price of gold but he undoubtedly thought that such a rise was a possibility if the free market were starved of fresh supplies. I had hoped to cross-question Dr Diederichs on this matter in his office, but alas, when I reached Cape Town, Parliament was rising for the election and the Finance Minister had gone to his farm for a few days rest before moving to his constituency for the electoral battle.

In his place I saw Mr Gerald Brown, the head of the Finance Ministry, in Pretoria. Mr Brown, who is English- speaking and a former Rhodes scholar, laughed at the idea that Dr Diederichs was party to a gold plot. The time-honoured policy of the government, he said, was to sell newly mined gold only when a trading deficit made it necessary. And in 1968 it was unnecessary because South Africa was enjoying the enormous inflow of private capital from the western world and the gold reserves were rising so rapidly that there was no need to add to them by the sale of newly mined gold.

But, I then asked, did not the Finance Ministry realise .the danger of allowing the price of gold on the free mar- ket to rise steeply enough to frighten the Americans who were already threatening to demonetise gold? Would it not have been wiser to play down the free market? His answer was that civil servants in Pre- toria, like those in Westminster, make mis- takes and are not noted for foresight. Nevertheless, it seems to me that Dr. Die- derichs, in gambling on a higher monetary price of gold, had assumed a very great risk because the stake-money was the future growth of the South African economy. If gold had been demonetised by the Ameri- cans, South Africa could not have counted on a continuing inflow of foreign capital to support its growth.

The question of an adequate flow of foreign capital, without which South Africa could not grow at its present pace, is such an important one that I asked a distin- guished economist, Mr A. B. Dickman, to give me his views. Mr Dickman is one of the general managers of Union Acceptances Ltd, the leading merchant bank in Johan- nesburg, which is backed by the great Anglo-American Corporation. His views appear in the next article in this Survey.