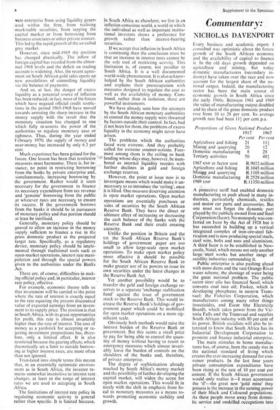 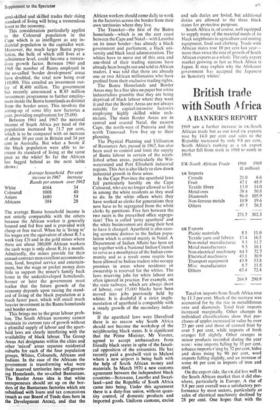 Every business and academic expert . I consulted was optimistic about the future growth of the South African economy and the availability of capital to finance it. In the old days growth depended on agriculture and mining, but today domestic manufacturers (secondary in- dustry) have taken over the race and now account for the largest share of the na- tional output. Indeed, the manufacturing sector has been the main source of economic growth in' South Africa since the early 1960s. Between 1961 and 1969 the value of manufacturing output doubled and its share of the gross domestic product rose from 10 to 28 per cent. Its average growth rate had been 111 per cent p.a.

Proportions of Gross National Product 1917 1967 Per cent Per cent Agriculture and fishing 21 111 Mining and quarrying 20 12 Domestic manufacturing 8 28 Tertiary activities 50 481 1967 GNP at factor cost Agriculture and fishing Min* and quarrying Dontestic manufacturing 1969 GNP A protective tariff had enabled domestic manufacturing to push ahead in many in- dustries, particularly chemicals, textiles and motor car parts and accessories. But one must not forget the dynamic part played by the publicly owned Iron and Steel Corporation (Iscor). No monopoly was con- ferred on Iscor by the Act of 1928 but it has succeeded in building up a vertical integrated complex of iron-ore-steel fab- rication and is now producing special steels, steel wire, bolts and nuts and aluminium. A third Iscor is to be established in New- castle, Natal, which means not only another large steel works but another range of satellite industries surrounding it.

Public enterprise is also pushing ahead with more dams and the vast Orange River water scheme, the shortage of water being the great national problem. The public sector inter alia has financed Sasol, which converts coal into oil; Fosker, which is developing phosphates in eastern Trans- vaal; the Fisheries Corporation, which manufactures among many other things insecticides, and Escor (the Electricity Board), which takes power from the Vic- toria Falls and the Transvaal and supplies South African industry with 80 per cent of its power. British socialists will also be in- terested to know that South Africa has its Industrial Development Corporation to promote and finance industrial enterprise.

The main stimulus to home manufac- tures has, of course, been the steady rise in the national standard of living which creates the ever-increasing demand for con- sumer products. In the last four years private consumption expenditures have been rising at the rate of 10 per cent per annum. If the South African government would only realise it—I must accentuate the if--the great new 'gold mine' they possess is the increase in the earning power of their black and Coloured populations. As these people move away from domes- tic service and unskilled occupations into R.9032 million R.1045 million R.1105 million R.2528 million R.11350 million semi-skilled and skilled trades their rising standard of living will bring a tremendous boost to the economy.

This consideration particularly applies to the Coloured population in the Cape which is as intelligent as any in- dustrial population in the capitalist west. Moreover, the much larger Bantu popu- lation, the bulk of which still lives at a subsistence level, could become a tremen- dous growth factor. Between 1960 and 1968 the number of Bantu employed in the so-called 'border development' areas have doubled, the total now being over 110,000. This entailed an investment out- lay of R.400 million. The government has recently announced a R.85 million investment programme to further employ- ment inside the Bantu homelands as distinct from the border areas. This involves the setting-up of some fifty new factories a year, providing employment for 25,000.

Between 1961 and 1967 the national income of South Africa per head of the population increased by 51.7 per cent, which is to be compared with an increase of about 30 per cent in Britain and 34 per cent in Australia. But what a boom if the black population were able to in- crease its standard of living at the same pace as the white! So far the African has lagged behind as the next table shows : Average household Per cent income in 1967 increase Rands per annum over 1962 White 4164 34 Coloured 1008 40 Asians 1680 54 Africans 384 28 The average Bantu household income is not strictly comparable with the others because the African worker is generally housed and fed free and is provided with cheap or free travel. When he is 'living in' his wages are the equivalent of about R.5 a week (say £3) and in the gold mines where there are about 380,000 African workers the cash wage is only about R.16 a month. Admittedly, the mines provide for their annual-contract men excellent accommoda- tion, food, hospital service and entertain- ment, but the wage or pocket money does little to support the miner's family back home in the underdeveloped homelands. Sooner or later the government must realise that the future growth of the economy depends upon raising the stand- ard of living of the black population at a much faster pace, which will entail much heavier investment in the Bantu homelands and border areas.

This brings me to the great labour prob- lem. The South African economy cannot maintain its current rate of growth without a plentiful supply of labour and the apart- heid laws are clearly interfering with the availability of black labour. The Group Areas Act designates within the cities and other 'mixed' areas separate residential suburbs for each of the four population groups, Whites, Coloureds, Africans and Indians. In the case of the Africans the government is transforming what were their reserved territories into self-govern- ing Homelands, the so-called Bantustans.

The Border Areas idea is that white entrepreneurs should set up on the bor- ders of the Bantustans factories which are subsidised with loans and tax concessions (much as our Board of Trade does here in the Development Areas), and that the African workers should come daily to work in the factories across the border from their own territories where they live.

The Transkei-the first of the Bantu homelands-which is on the east coast between the Cape and Natal-with Lesotho on its inner border-has already a black government and parliament, a black uni- versity and black local administration. The whites have to move out of this area and one-third of their trading stations have already been bought out and sold to African traders. I was told that there are already one or two African millionaires who have profited from their exclusive trading rights.

The Bantu Homelands and Border Areas may be a fine idea on paper but white industrialists grumble that they are being deprived of black labour where they want it and that the Border Areas are not always suitable for capital-intensive factories employing highly skilled white tech- nicians. The main Border Areas are in central and coastal Natal, the eastern Cape, the north-west of Pretoria and the north Transvaal. Few live up to their planning.

The Physical Planning and Utilisation of Resources Act, passed in 1967, has also been used to control and limit the supply of Bantu labour in certain of the estab- lished urban areas, particularly the Wit- watersrand and Port Elizabeth industrial regions. This Act is also likely to slow down industrial growth in ffiese areas.

In the Cape Province the apartheid laws fall particularly harshly on the Cape Coloured, who are no longer allowed to live in among the white residents as they used to do. In the white offices where they have worked as clerks for generations they now have to be segregated from the white clerks by partitions. Five feet between the two races is the prescribed office segrega- tion! This is called 'petty apartheid' and the white businessmen are doing their best to have it changed. Apartheid is also caus- ing economic distress to the Indian popu- lation which is centred mainly in Natal. A Department of Indian Affairs has been set up together with a National Indian Council to serve as a mouthpiece of the Indian com- munity and as a result some respite has been allowed to Indian traders who occupy premises -in areas where residence or ownership is reserved for the whites. The laws reserving jobs for white labour are often ignored in practice. For example, on ' the state railways, which are always short of labour, over 15,000 blacks have been moved into jobs previously held by whites. It is doubtful if a strict imple- mentation of apartheid is compatible with a steady growth of the secondary indus- tries.

If the apartheid laws were liberalised there is no reason why South Africa should not become the workshop of the neighbouring black states. It is significant that the Prime Minister, Mr Vorster, agreed to accept ambassadors from friendly black states in spite of the fanati- cal opposition of the extremists. He has recently paid a goodwill visit to Malawi where a new airport is being built with the help of South African money and materials. In March 1970 a new customs agreement between the independent black countries-Botswana, Lesotho and Swazi- land-and the Republic of South Africa came into being. Under this agreement there is a duty-free union, without quan- tity control, of domestic products and imported goods. Uniform customs, excise and sale duties are levied, but additional duties are allowed to the three black states for protective purposes.

South Africa is, of course, well equipped to supply many of the material needs of its black neighbours in agriculture and mining equipment, food and clothing. Trade with African states rose 10 per cent last year- more than twice the rate of growth of South African exports as a whole. The only export market growing as fast as black Africa is Japan. It may explain why the Afrikaner government has accepted the Japanese as 'honorary whites'.