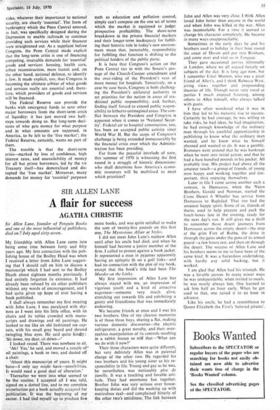 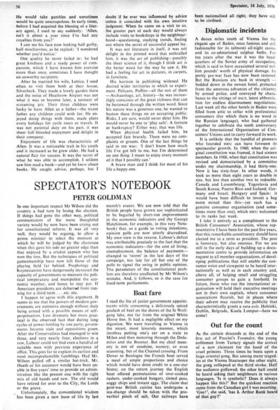 A flair for success

AGATHA CHRISTIE Sir Allen Lane, founder of Penguin Books and one of the most influential of publishers, died on 7 July aged sixty-seven.

My friendship with Allen Lane came into being some time between forty and fifty years ago. My first connection with the pub- lishing house of the Bodley Head was when I received a letter from John Lane suggest- ing that I should call on him to discuss a manuscript which I had sent to the Bodley Heath about eighteen months previously. I had entirely forgotten its existence. It had already been refused by six other publishers without any words of encouragement, and I had quite given up hope of ever having a book published.

I shall always remember my first meeting with John Lane. I was paralysed with shy- ness as I went into his little office, with its chairs and its tables crowded with manu- scripts and drawings and oil paintings. He looked to me like an old fashioned sea cap- tain, with his small grey beard and shrewd twingling blue eyes. He said quite kindly: 'Sit down, my dear, sit dOwn—'

I looked round. There was nowhere to sit.

'All! Yes,' he said, and moved a couple of oil paintings, a book or two, and dusted off a chair.

'About this manuscript of yours. It might have—I only say might have—possibilities. It would need a good deal of alteration.'

Thereafter we went into what seemed to be the routine. I accepted all I was told, signed on a dotted line, and to my complete stupefaction got a book actually accepted for publication. It was the beginning of my career. I had tied myself up to produce five more books, and was quite satisfied to make the sum of twenty-five pounds on this first one, The Mysterious Affair at Styles.

I did not meet John Lane's nephew Allen until after his uncle had died, and when he himself had become a junior member of the firm. I called to protest against a book jacket. It represented a man in pyjamas apparently having an epileptic fit on a golf links—and had no connection with the plot of my book, except that the book's title had been The Murder on the Links.

My first impression of Allen Lane has always stayed with me, an impression of vigorous youth and a kind of attractive eagerness—someone very much alive, stretching out towards life and exhibiting a gaiety and friendliness that was immediately endearing.

We became friends at once and I met his two brothers. One of my clearest memories is of those three boys, sharing a flat, making various domestic discoveries—the electric refrigerator, a great novelty, and their over- zealous manipulation of its controls resulting in a rabbit frozen so stiff that—'What can we do with it now?'

Their three characters were quite different, but very definitely Allen was in paternal charge of the other two He regarded his two brothers and his young sister as his re- sponsibility in life. Young and gay as he was, he nevertheless was noticeably pere de famille. It was a touching and lovable atti- tude. They had enormous fun together. Brother John was very serious over house- keeping duties and did the washing up with meticulous zeal—and complained bitterly of the other two's untidiness. The link between

John and Allen was very close. I think Allen loved John better than anyone in the world

and when John was killed in the war, Allen was inconsolable. For a time it seemed to change his character completely. He became in many ways unapproachable.

Sometimes in the early days he and his brothers used to holiday in their boat round the coast of Devon and put into Brixham, and come over and visit us in Torquay.

They gave occasional parties informally in London, where we all argued fiercely on subjects of the day. It is long ago now, but I remember Ethel Mannin, who was a great friend of Allen's, and I think Rebecca West, airing views together and propounding theories of life. Though never very vocal at parties I much enjoyed listening, among others to Allen himself, who always talked with gusto.

I have often wondered what it was in him that led to his meteoric rise to success. Certainly he had courage; he was willing to take risks, he had ideas, he had imagination, he had enough knowledge of the ordinary man through his youthful apprenticeship in publishing to know what the ordinary man wanted, and he knew what he himself planned and wanted to do. It was a gamble. Rumours went around that he was bankrupt when he went into initial action, and that he had a bare hundred pounds in his pocket. All probably true. His project had above all the amateur touch—a group of friends, of young men happy and working together and (im- portant, this) enjoying themselves.

Later in life I came across another such a venture, in Damascus, when the Nairn Brothers, Gerald and Norman. started the Cross Desert 6 Wheeler bus service from Damascus to Baghdad. That too had the amateur happy spirit. Some of us, friends of theirs, used to help prepare and pack the lunch-boxes late in the evening, ready for the next day's run. It still gives me a thrill to remember those desert journeys from Damascus across the empty desert—the stop at the grim Fort of Rutba, the drive in through the gates under the guns of its armed guard—a few hours rest, and then on through the desert. The success of Allen Lane and his brothers seems to me to have been of the same kind. It was a hazardous undertaking, with hardly any solid backing, but it worked.

I am glad that Allen had his triumph. He was a lovable person. In many minor ways he was undependable; when invited to meals, he was nearly always late. One learned to ask him half an hour early. When he got used to that, one raised it to an hour in advance.

Like his uncle, he had a resemblance to Queen Elizabeth the First's 'beloved pirates'.

He would take gambles and sometimes would be quite unscrupulous. In early times, before I had acquired the blessing of a liter- ary agent, I used to say suddenly: 'Allen, isn't it about a year since I've had any royalties from you?'

I can see his face now looking half guilty, half mischievous, as he replied: 'I wondered whether you'd notice.'

One quality he never failed in: he had great kindness and a ready power of com- passion, which I have known him exercise more than once, sometimes I have thought on unworthy recipients.

After he married his wife, Lettice, I used often to visit them both at their house, Silverbeck. They made a lovely garden there and the noise of Heathrow Airport was not what it was to become later, a torment of screaming jets. Their three children were lucky to have Allen as a father—the nicest father any children could wish for. He en- joyed doing' things with them, made plans every holidays for cycle tours or travels. It was not parental duty on his part, it was sheer full blooded enjoyment and delight in their company.

Enjoyment of life was characteristic of Allen. It was a noticeable trait in his youth and it increased as he grew older. He had a natural flair for success. It was the secret of what he was able to accomplish. I seldom saw him read a book—and yet he knew about books. He sought advice, perhaps, but I

doubt if he ever was influenced by advice unless it coincided with his own intuitive judgment. When he came on a visit to us, the greater part of each day would always include visits to bookshops in the neighbour- hood—questioning, studying trends, finding out where the secret of successful appeal lay.

It was not literature in itself, it was not delight in the printed word that enthralled him, it was the art of publishing—possibly the sheer science of it, though I think art is the better word for the way he saw it. He had a feeling for art in pictures, in carpets, in furniture.

His horizon in publishing widened. He desired wider territories in which to experi- ment. Pelicans, Puffins—all the rest of them —Archaeology, art, history—he was increas- ingly conscious of the great richness that can be bestowed through the written word. Since his nature was a generous one, he wanted to bestow these things on an accepting public. Risks, I am sure, would never deter him. He would never be one to 'play safe'. A fortune or bankruptcy? Either way, that was life.

When physical health failed him, he accepted fate bravely. There were no com- plaints or groans. One of the last things he said to me was: 'I don't know how much life I've got left to me, but I'm determined on one thing. I mean to enjoy every moment of it that I possibly can.'

A brave man and I think for most of his life a happy one.