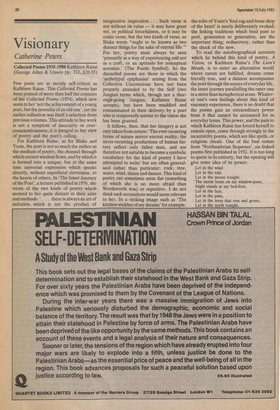 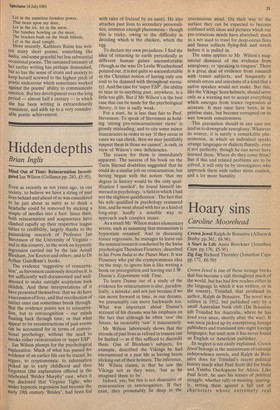 Collected Poems 1935-1980 Kathleen Raine (George Allen & Unwin pp. 312, £10.95) Few poets are as sternly self-critical as Kathleen Raine. This Collected Poems has been pruned of more than half the contents of her Collected Poems (1954), which now seem to her 'not the achievement of a young poet, but the juvenilia of an old one', yet the earlier collection was itself a selection from previous volumes. This attitude to her work is not a symptom of insecurity or overconscientiousness; it is integral to her view of poetry and the poet's calling.

For Kathleen Raine, as for Blake and Yeats, the poet is not so much the author as the medium of poetry, the channel through which ancient wisdom flows, and by which it is formed into a unique, but at the same time universal expression which speaks directly, without superficial cleverness, to the hearts of others. In 'The Inner Journey of the Poet', a lecture published in 1976, she wrote of the two kinds of poetry which seemed to her quite distinct in their aims and methods:' . . . there is always an art of imitation which is not the product of imaginative inspiration . . . Such verse is not without its value — it may have great wit, or political forcefulness, or it may be comic verse; but the two kinds of verse, so Blake wrote "ought to be known as two distinct things for the sake of eternal life." For her, poetry must always be seen 'primarily as a way of experiencing and not as a craft, or an aptitude for conceptual acrostics.' (The Poetic Symbol). So the discarded poems are those in which the 'archetypal epiphanies' arising from the Collective Unconscious have not been properly attended to by the Self (two Jungian terms which, though not a thorough-going Jungian, Kathleen Raine accepts), but have been muddied and contaminated in their delivery by a poet who is temporarily untrue to the vision she has been granted.

It follows, then, that her imagery is not only taken from nature: 'The ever-recurring forms of nature mirror eternal reality; the never-recurring productions of human history reflect only fallen man, and are therefore not suitable to become a symbolic vocabulary for the kind of poetry I have attempted to write' but are often generalised rather than particular; rock, tree, water, wind, dance and dancer. This kind of poetry can sometimes seem flat (something of which she is no more afraid than Wordsworth was) or repetitive. I do not think such accusations would seem relevant to her. In a striking image such as 'The kitchen-midden of my dreams' for example, the echo of Yeats's 'foul rag-and-bone shop of the heart' is surely deliberately evoked; the linking traditions which bind poet to poet, generation to generation, are the important thing; rediscovery, rather than the shock of the new.

To read the autobiographical accounts which lie behind this kind of poetry, A Vision, or Kathleen Raine's The Lion's Mouth, is to enter an alternative world where curses are fulfilled, dreams come literally true, and a daimon accompanies the poet through the scenes of everyday life, the inner journey parallelling the outer one in a more than metaphorical sense. Whatever one's own feelings about this kind of visionary experience, there is no doubt that the poems gain an extraordinary power from it that cannot be accounted for in everyday terms. This power, and the pain to which Kathleen Raine has forced herself to remain open, come through strongly in the incantatory poems, which are like spells, or religious rituals. One of the best comes from 'Northumbrian Sequence', six linked poems first published in 1952. It is too long to quote in its entirety, but the opening will give some idea of its power:

The storm beats on my window-pane, Night stands at my bed-foot, Let in the fear, Let in the pain, Let in the trees that toss and groan,

Let in the north tonight.

Let in the nameless formless power, That beats upon my door, Let in the ice, let in the snow, The banshee howling on the moor, The bracken-bush on the bleak hillside, Let in the dead tonight.

More recently, Kathleen Raine has written many short poems, something like haiku, and some graceful but less substantial occasional poems. The sustained intensity of her earlier writing has perhaps diminished, but so has the sense of strain and anxiety to keep herself screwed to the highest pitch of Poetic endeavour which sometimes worked against the poems' ability to communicate emotion. But her development over the long Period — almost half a century — in which she has been writing is extraordinarily consistent, and adds up to a very considerable poetic achievement.