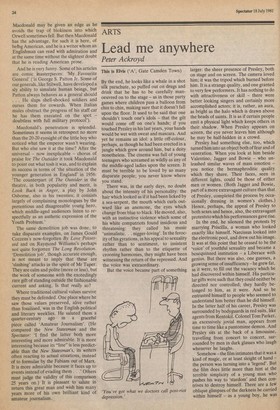 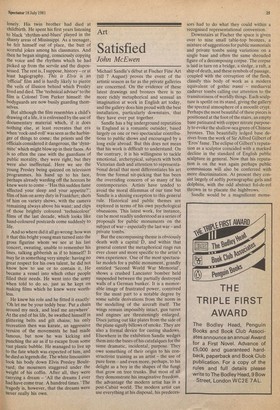 This is Elvis ('A', Gate Camden Town) By the end, he looks like a whale in a shot silk parachute, so puffed out on drugs and drink that he has to be carefully manoeuvred on to the stage ŌĆö as in those party games where children pass a balloon from chin to chin, making sure that it doesn't fall upon the floor. It used to be said that one shouldn't touch one's idols ŌĆö that the gilt would come off on one's hands; if you touched Presley in his last years, your hands would be wet with sweat and mascara. And yet he remains an idol: a little off-colour, perhaps, as though he had been erected in a jungle which grew around him, but a deity nonetheless. The cinema was full of young teenagers who screamed as wildly as any of the middle-aged ladies upon the screen. It must be terrible to be loved by so many disparate people; you never know where you stand.

There was, in the early days, no doubt about the intensity of his personality: the hair which looked as if it had been licked by a sea-serpent, the mouth which curls outward like an anemone, the eyes which change from blue to black. He moved, also, with an instinctive violence which some of his white compatriots found insidious and threatening: they called his music 'animalistic. . . nigger-loving'. In the ferocity of his gyrations, in his appeal to sexuality rather than to sentiment, to insistent rhythm rather than to the etiquette of crooning harmonies, they might have been witnessing the return of the repressed. And the voice was extraordinary.

But the voice became part of something larger: the sheer presence of Presley, both on stage and on screen. The camera loved him; it was the tripod which burned before him. It is a strange quality, and one granted to very few performers. It has nothing to do with attractiveness or skill ŌĆö there were better looking singers and certainly more accomplished actors; it is, rather, an aura, as bright as the halo which is drawn above the heads of saints. It is as if certain people emit a physical light which keeps others in their shadow. When Presley appears on screen, the eye never leaves him although he may be half-hidden in a crowd.

Presley had something else, too, which turned him into an object both of fear and of veneration. When you look at him beside Valentino, Jagger and Bowie ŌĆö who unleashed similar waves of mass emotion ŌĆö you notice the hermaphroditic quality which they share. Their faces, seen in different lights, could be those of either men or women. (Both Jagger and Bowie, part of a more extravagant culture than that of Presley, completed the process by occasionally dressing in women's clothes.) Hence, perhaps, the appeal of Presley to both sexes and hence, also, the extravagant protests to which his performances gave rise.

In the end, he silenced the protests by marrying Priscilla, a woman who looked exactly like himself. Narcissus looked into the electronic pool, and drew out his image. It was at this point that he ceased to be the 'voice' of youthful sexuality and became a besequinned institution ŌĆö a Liberace with genius. But there was also, one guesses, a growing sense of insufficiency ŌĆö he grew fat, as it were, to fill out the vacancy which he had discovered within himself. His particular gifts were such that they could neither be directed nor controlled; they hardly belonged to him, as it were. And so he entrusted himself to people who seemed to understand him better than he did himself. In the latter half of his career, Presley was surrounded by bodyguards in red suits, like agents from Rentokil. Colonel Tom Parker, an excessively jovial man, appears from time to time like a pantomime demon. And Presley sits at the back of a limousine, travelling from concert to concert, surrounded by men in dark glasses who laugh whenever he laughs.

SomehowŌĆö the film intimates that it was a kind of magic, or at least sleight of hand ŌĆö the person was turning into a 'legend'. But the film does little more than hint at the terrible simplicity of a young man who pushes his way to 'stardom' and then contrives to destroy himself. There are a few oblique glimpses of the darkness he carried within himself ŌĆö as a young boy, he was lonely. His twin brother had died at childbirth. He spent his first years listening to black 'rhythm-and-blues' played in the shanty areas of Mississippi. As a teenager, he felt himself out of place, the butt of scornful jokes among his classmates. And then he began singing, consciously copying the voice and the rhythms which he had picked up from the servile and the dispossessed. The rest is, I suppose, history ŌĆö or at least hagiography. This is Elvis is an 'official' film and is hardly likely to pierce the veils of illusion behind which Presley lived and died. The 'technical adviser' to the film is Colonel Tom Parker himself: the bodyguards are now busily guarding themselves.

But although the film resembles a child's drawing of a life, it is enlivened by the use of documentary material which, if it does nothing else, at least recreates that era When 'rock-and-roll' was seen as the harbinger of things to come; the priests and the officials considered it dangerous, the 'dynamite' which might blow up in their faces. As is so often the case with the guardians of public morality, they were right, but they were also ineffectual. Here we see the Young Presley being quizzed on television programmes, his hand up to his face, perhaps already warding off the horrors he knew were to come ŌĆö 'Has this sudden fame affected your sleep and your appetite?'; film of him on army duty in Frankfurt; shots of him on variety shows, with the camera remaining always above his waist; and clips of those brightly coloured `technicolour' films of the last decade, which looks like hand-coloured postcards come suddenly to life.

And so where did it all go wrong: how was it that this bright young man turned into the gross figurine whom we see at his last concert, sweating, unable to remember his lines, talking gibberish as if to himself? It may lie in something very simple: having no great respect for his own talent, he did not know how to use or to contain it. He became a vessel into which other people filled their needs. He went into the army When told to do so, just as he kept on making films which he knew were worthless.

He knew his role and he fitted it exactly: 'Oh let me be your teddy bear. Put a chain around my neck, and lead me anywhere'. At the end of his life, he swathed himself in glittering belts and gilt chains; his only recreation then was karate, an aggressive version of the movements he had made famous, but now he was kicking and Punching the air as if to escape from some vast plastic bubble. He managed to live up to the fate which was expected of him, and he died as legends die. The white limousines took his body down Elvis Presley Boulevard; the mourners staggered under the weight of his coffin. After all, they were Carrying a dream ŌĆö 'All the dreams I ever had have come true. A hundred times.' The tragedy is, however, that the dreams were never really his own.