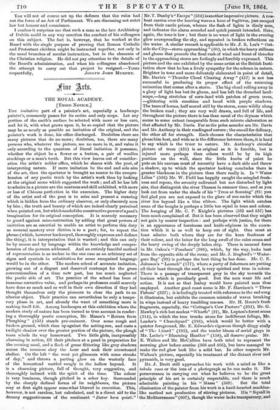 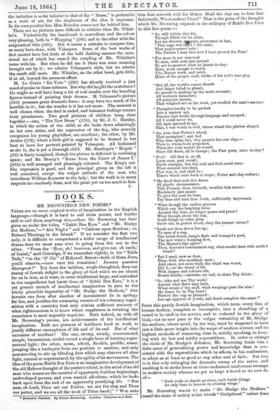 THE imitative part of a painter's art, especially a landscape

painter's, commonly passes for its entire and only scope. Let any portion of the earth's surface be selected with more or less care, and let it, with what grows upon it, be so copied that the picture may be as nearly as possible an imitation of the original, and the painter's work is done, his office discharged. Doubtless there are many pictures that do no more ; doubtless, too, there are many persons who, whatever the picture, see no more in it, and value it only according to the quantum of literal imitation it possesses,

whether the object be a flower or a button, a pair of woollen stockings or a man's teeth. But this view leaves out of consider- ation the artist's nobler office, which he shares with the poet, of interpreting nature. If mere imitation be the end and sole aim of the art, then the spectator is brought no nearer to the compre- hension of any poetic truth by the artist's work than by looking at the original scene which suggested the work ; and all he has left to admire in a picture are the neatness and skill exhibited, with more or less of Chinese perfection in the execution. The higher duty of the artist and of the poet is to seize and present a meaning which is hidden from the ordinary observer, or only obscurely seen by him ; the truth and beauty of which are indeed clearly perceived when pointed out, but whichneededthe constructive po wer of a poet's imagination for its original conception. It is scarcely necessary to guard against misconstruction by adding that great powers of imitation are as essential to enable an artist to perform this duty as unusual mastery over diction is to a poet ; for, to repeat the phrase (which, however hackneyed, thoroughlyoxpresses and defines the thing), it is interpretation that is wanted ; and this can only be by means and by language within the knowledge and compre- hension of the persons addressed. And an entirely fanciful method of representation is as useless in the one case as an arbitrary set of signs and symbols in substitution for some recognized language would be in the other. The modern school of accurate imitation, growing out of a disgust and deserved contempt for the gross conventionalism of a time noNv past, has too much neglected the poetic side of art. The practice of the school has been of immense corrective value, and perhaps its professors could scarcely have done so much and so well in their own direction if they had thought themselves only the pioneers to clear the path to an ulterior object. Their practice can nevertheless be only a tempo- rary phase in art, and already the want of something more is making itself felt. Among landscapes at this exhibition where the modern study of nature has been turned to true account in render- ing a thoroughly poetic conception, Mr. Mason's "Return from Ploughing" (253) stands pre-eminent. Over some rough and broken ground, which rises up against the setting sun, and casts a twilight shaow over the greater portion of the picture, the plough team winds its way homeward. Two little girls, inexpressibly charming in action, fill their pitchers at a pond in preparation for the evening meal, and a flock of geese flittering like grey shadows across the common obey the hour and seek their accustomed shelter. On the left "the west yet glimmers with some streaks of day," and throws a parting glow on the westerly face of the homestead nestled snugly in the hollow beyond. It is a charming picture, full of thought, very suggestive, and thoroughly imbued with the spirit of the time. The colour is very luminous, though pitched in a sober key. Surrounded by the sharply defined forms of its neighbours, the picture may at first sight appear somewhat blurred in execution. This, however, is not careless, but calculated, and is a direct aid to the dreamy suggestiveness of the sentiment "Dater hora quieti." Mr. T. Denby's " Escape" (534) is another impressive picture. A row- boat carries over the heaving waves a knot of fugitives, just escaped

from their castle prison, whence the flash of lights is dimly seen, and indicates the alarm sounded and quick pursuit intended. Here, again, the tone is low ; but there is no want of light in the evening glow overspreading the sky, and repeated in broken reflections on the water. A similar remark is applicable to Mr. J. R. Lee's " Out- side the City—storm approaching" (60), in which the heavy stillness and gloom that precede the final rash of wind and burst of thunder in the approaching storm are feelingly and forcibly expressed. This picture and the one exhibited by the same artist at the British Insti- tution show that he has a lively sympathy for the solemn in nature.

Brighter in tone and more delicately elaborated in point of detail, Mr. Davis's " Thander Cloud Clearing Away" (417) is not less successful in producing its proper effect of the returning animation that comes after a storm. The big cloud rolling away in a glory of light has lost its gloom, and has left the drenched land- scape,—long stretches of corn-land with patches of green trees, —glittering with sunshine and laced with purple shadows. The team of horses, half scared still by the storm, come wildly along the broken road ; they, are very well drawn, and full of life, and throughout the picture there is less than usual of the dryness which seems to some extent inseparable from such minute elaboration as that affected by Mr. Davis. Far as the poles asunder are Mr. Davis and Mr. Anthony in their readingsof nature ; the oneall for delicacy, the other all for strength. Each chooses the characteristics that please him best, and wide as is the difference between them, it is hard

to say which is the truer to nature. Mr. Anthony's circular

picture of trees (435) is as original as it is forcible, but is injured more perhaps than others would be by its high position on the wall, since the little knobs of paint he puts on his canvass must of necessity have a dark side and throw a shadow, up to which the spectator looking concludes there is greater blackness in the picture than there really is. In "Water Lilies" (536) Mr. W. Field has happily caught the mingled fresh- ness and repose, the serenity enlivened but not disturbed by light airs, that distinguish the river Thames in summer time, and as you look out from under the shade of his "Trees at Sonning" (81) you feel glad you are not exposed to the glare of sun under which the river lies beyond like a blue ribbon. The light which catches some of the boughs is perhaps a little too equal in tone and colour.

The hanging of Mr. C. P. Knight's pictures (533 and 557) has been much complained of. But it has been observed that they might not gain by nearer inspection : and perhaps with justice, for there is an appearance of harshness and knife-edginess in the execu- tion which it is as well to keep out of sight. One must at least admire both where they are for the keen freshness of their colour, and the latter for the long swell of the calni ocean and the heavy swing of the deeply laden ship. There is unusual force in Mr. Oakes's "Poachers" (388), which, by the way, looks best

from the opposite side of the room; and Mr. J. Mogford's "Water-

gate Bay" (99) is perhaps the best thing he has done. Mr. C. E. Johnson's "Launch" (177), where a party of fishermen are putting off their boat through the surf, is very spirited and true in colour.

There is a passage of transparent grey in the sky towards the horizon which is peculiarly good. But the men want life and action. It is not so that Isabey would have painted men thus employed. Another good coast scene is Mr. F. Harrison's "Three Fishers" (827); it is feelingly treated with reference to the sad song it illustrates, but exhibits the common mistake of waves breaking in wisps instead of heavy tumbling masses. Mr. H. Moore's fresh fragments, especially, the "Cottager's Cow Pasture" (234), Mr. G.

Mawley's rich but modest "Wharfe" (21), Mr. Lupton's forest scene (314), in which the tree trunks atone for indifferent foliage, Mr. Leader's "Churchyard" (316), which would be better with a quieter foreground, Mr. E. Edwards's vigorous though dingy stuffy of " Ths Lizard" (195), and the tender bloom of aerial greys in Mr. Leche's " Blooming Heather " (158), all deserve praise. Mr.

E. Walton and Mr. McCallinn have both tried to represent the morning glow before sunrise (366 and 505), but have managed to make the red glow look like a solid bar. In other respects Mr. Walton's picture, especially his treatment of the distant river and pyramids, is very good.

Mr. J. Brett still approaches his work with a mind as like a tabula rasa or the lens of a photograph as he can make it. His

perseverance in carrying out what he believes, to be the great principle of his art is certainly respectable, and there is much admirable painting in his " Massa " (569). But the total elimination of the painter from his work is a hard-hearted machine- like method not productive of stirring pictures. His "Squall in the Mediterranean" (607), though the water lacks transparency, and the imitation is so far inferior to that of le "Mama," is preferable as a work of art, for the singleness of the idea it expresses. In his own peculiar line Miss Blunden comes not far behind him.

There are no pictures more difficult to criticize than Mr. Whist- ler's. Undoubtedly the handicraft is marvellous and the colour verypleasing, both in " Wapping " (585) and in the other with the enigmatical title (593). But it seems a mistake to compare him, as many have done, with Velasquez. Some of the best works of that master have but little of the bold dashing manner the occa- sional use of which has caused the coupling of Mr. Whistler's name with his. But when he did use it there was some meaning brought out by it ; we admire Velasquez's style, but we admire the result still more. Mr. Whistler, on the other hand, gets little, if at all, beyond the sensuous effect.

M. Le Gros's "Ex Vote" (230) has already received a just meed of praise in these columns. But why did he gild the scutcheon ? He might as well have hung a bit of real muslin over the kneeling figures instead of painting their dresses. M. Tidemand's picture (542) possesses great dramatic force: it may have too much of the horrible in it ; but the wonder is it has not more. The moment is well chosen when the duel is ended, and humaner feelings resume their prominence. Two good pictures of children hang close together ;—one, "The New Dress" (176), by Mr. J. C. Horsley, in which the action of the child, as she looks down admiringly on her own attire, and the expression of the dog, who scarcely recognizes his young playfellow, are excellent ; the other, by Mr. Archer (178),*where a little girl is supposed to be dressed in her best to have her portrait painted by Velasquez. All bedizened as she is, she is yet a thorough child. Mr. Stanhope's " Rizpah " (33) is finely imagined, though the picture is deficient in rendering space ; and Mr. Storey's "Scene from the Court of James I." (465) is well arranged and pleasingly coloured. The King's cat- like expression is good, and the principal group on the left is well conceived, except the vulgar attitude of the man who introduces William Seymour to the lady ; but the work is in many respects too carelessly done, and the paint put on too much in flats V.