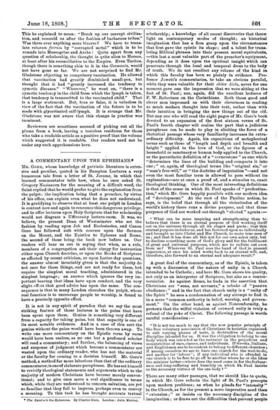 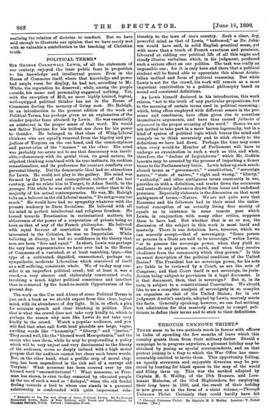 A COMMENTARY UPON THE EPHESIANS.*

Ma. GORE, whose knowledge of patristic literature is exten- sive and peculiar, quoted in his Bampton Lectures a very humorous tale from a letter of St. Jerome, in which that learned commentator tells how, when he once asked St. Gregory Nazianzen for the meaning of a difficult word, the Saint replied that he would prefer to give the explanation from the pulpit: the implication being that a preacher, by virtue of his office, can explain even what he does not understand. It is gratifying to observe that at least one pulpit in London is content now and again to renounce this dangerous privilege, and to offer lectures upon Holy Scripture that for scholarship would not disgrace a University lecture-room. It was, we believe, the present Dean of Westminster who set the fashion by reading upon Job and Ecclesiastes, and Canon Gore has followed suit with courses upon the Sermon on the Mount, and the Epistles to Ephesus and Rome, the second of these being the book now before us. Our readers will bear us out in saying that when, as a rule, members of a congregation ask their clergy for instruction either upon Church doctrine, or upon the Books of Scripture as affected by recent criticism, or upon Latter-day questions, the answer almost invariably given is that the majority do not care for these things, and are not ready for them, but require the simplest moral teaching, administered in the simplest language ; an answer which ignores the very im- portant bearing that ideas have upon conduct, and the very slight effect that good advice has upon the same. The con- sequence is that in many London churches the pulpit, whose real function is to encourage people to worship, is found to have a precisely opposite effect.

It is not in any spirit of paradox that we say the most striking feature of these lectures is the pains that have been spent upon them. Genius is something very different from a capacity for taking pains, but that capacity is one of its most notable evidences. And in a case of this sort the genius without the pains would have been thrown away. To write one more commentary on the Epistle verse by verse would have been useless, as no one but a professed scholar will read a commentary ; and further, the balancing of views and suspense of judgment which become a commentator are wasted upon the ordinary reader, who has not the material or the faculty for coming to a decision himself. Mr. Gore's method, a method far more laborious than that of the ordinary commentator, isoneof elaborate paraphrase. He has set himself to revivify theological statements and arguments which to the majority of modern Christians have become merely conven- tional; and to give once more a real significance to terms which, while they are understood to concern salvation, are yet so familiar that they fail to impress, perhaps even to convey a meaning. To this task he has brought accurate textual • The Epiatto to the Epherians. By Charles Gore. London : John Murray.

scholarship; a knowledge of all recent discoveries that throw light on contemporary modes of thought; an historical imagination that has a firm grasp upon the circumstances that first gave the epistle its shape ; and a talent for trans- lating Biblical phrases into their present moral equivalents, —this last a most valuable part of the preacher's equipment, depending as it does upon the spiritual insight which can penetrate through the local and temporal dress to the body of truth. We do not recollect any volume of the kind in

which this faculty has been so plainly in evidence. Pro- fessor Jowett's commentaries, to take an obvious parallel, while they were valuable for their obiter dicta, never for one

moment gave one the impression that we were sitting at the feet of St. Paul ; nor, again, did the excellent lectures of F. W. Robertson on the Corinthians. Both these good and clever men impressed us with their cleverness in reading so much modern thought into their text, rather than with their intuition in bringing the new things out of the old..

But any one who will read the eight pages of Mr. Gore's book devoted to an expansion of the first sixteen verses of St. Paul's fourth chapter will realise the part that a judicione paraphrase can be made to play in eliciting the force of a rhetorical passage whose very familiarity increases its extra-

ordinary difficulty. Again, his expositions of metaphorical terms such as those of " length and depth and breadth and height " applied to the love of God, or the figures of a household or sanctuary or human body applied to the Church, or the parenthetic definition of a " cornerstone " as one which

"determines the lines of the building and compacts it into one; " or, again, of theological terms like " original sin," or " man's free-will," or " the doctrine of imputation "—and not even the most familiar term is allowed to pass without its. explanation—are at once a proof of, and a stimulus to, exact theological thinking. One of the most interesting definitions.

is that of the sense in which St. Paul speaks of " predestina- tion," which Mr. Gore happily parallels with our modern idea. of "development." At the root of the Pauline notion, he says, is the belief that through all the vicissitudes of the world's history there runs a divine purpose, and that these purposes of God are worked out through " elected " agents:-

" What can be more inspiring and strengthening than to. believe that there is an eternal purpose of God working itself out on the universe through all its stages and parts ; that this eternal purpose includes us, and has fastened upon us individually and brought us into Christ and His Church, to make true men of us ; and that it has done all this not for our own sakes only, but to disclose something more of God's glory and for the fulfilment. of great and universal purposes, which are to radiate out even. from us ? Wherever St. Paul sees the hand of God in present. experience, at once his mind works back to an eternal will, and,. therefore, also forward to an eternal and adequate result."

A great deal of the commentary, as of the Epistle, is taken,

up with a discussion of the nature of unity in a Church. intended to be Catholic ; and here Mr. Gore shows his quality, not only as an interpreter of Scripture, but also as a contro- versialist. As against Rome, he finds in the assertion that

Christians are " eons, not servants," a rebuke of " passive obedience; and in the fact that church unity is a " unity of the Spirit" he sees a condemnation of any attempt to find it in a mere "common authority in belief, worship, and govern- ment." On the other hand, as against Nonconformity, he protests that the wilful violation of outward unity is truly a refusal of the yoke of Christ. The following passage is worth, careful consideration :— "It is not too much to say that the now popular principle of the free voluntary association of Christians in societies organised. to suit varying phases of taste, is destructive of the moral. discipline intended for us. It was the obligation to belong to one body which was intended as the restraint on the prejudices and eccentricities of race, classes, and individuals. If Greeks, Italians. and Englishmen are to be content to belong to different churches .; if among ourselves we are to have one church for the weil-to-do,, and another for `labour' ; if any individual who is offended in one church is to be free to go off to another where he or she likes the minister better—where does the need come in for the forbear-. ante and long-suffering and humility on which St. Paul insists as the necessary virtues of the one body ? "

There are many other passages, that we should like to quote, in which Mr. Gore reflects the light of St. Paul's precepts

upon modern problems ; as when he pleads for "intensity" in the Church, as for the present a more imperative need than " extension ;" or insists on the necessary discipline of the imagination ; or draws out the difficulties that prevent people realising the relation of doctrine to conduct. But we have said enough to illustrate our opinion that we have rarely met with so valuable a contribution to the teaching of Christian truth.