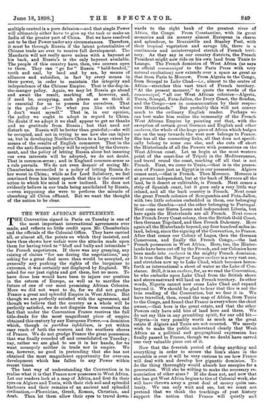 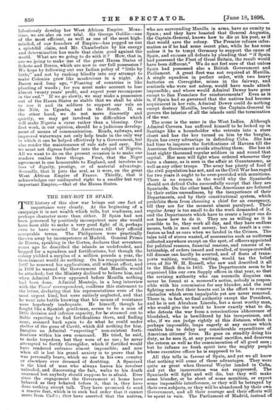 Tuesday is one of the most important international agreements ever made, and reflects no little credit upon Mr. Chamberlain and the officials of the Colonial Office. They have carried all, or almost all, the points on which they insisted, and have thus shown how unfair were the attacks made upon them for having tried to " bluff and bully and intimidate " the French negotiators. If there was any grasping, any raising of claims "for use during the negotiations," any asking for a great deal more than would be accepted, or generally any pushing the rights of the bargainer to extremes, it was certainly not displayed by England. We asked for our just rights and got them, but no more. To have done less would have been to injure our position in the esteem of Europe, as well as to sacrifice the future of one of our most promising African Colonies. More we did not want to do, for we did not grudge France a great and splendid Empire in West Africa. But though we are perfectly satisfied with the agreement, and though we believe that the country as a whole will be perfectly satisfied, we do not disguise from ourselves the fact that under the Convention France receives the full title-deeds for the most magnificent piece of empire obtained this century by any European Power,—a dominion which, though in partibus infidelium, is yet within easy reach of both the western and the southern shores of France. We do not grudge France the great possession that was finally rounded off and consolidated on Tuesday ; nay, rather we are glad to see it in her hands, for we want monopoly neither in trade nor in empire. We see, however, no good in pretending that she has not obtained the most magnificent opportunity for over-sea development which has fallen to any Power within recent times.

The best way of understanding the Convention is to realise what it is that France now possesses in West Africa. Let our readers look at a map of Africa, and first fix their eyes on Algiers and Tanis, with their rich soil and splendid harbours and their remains of an ancient and splendid civilisation,—Phoenician, Greek, Roman, Christian, and Arab. Then let them allow their eyes to travel down- wards to the right bank of the greatest river of Africa, the Congo. From Constantine, with its great memories and its scenery almost European in charm and splendour, to Brazzaville and Stanley Pool, with their tropical vegetation and savage life, there is a continuous and uninterrupted stretch of French terri- tory. As they say in our country districts, the French President might now ride on his own land from Tunis to Loango. The French dominion of West Africa (as says an official communiqué to the Paris Press with very natural exultation) now extends over a space as great as that from Paris to Moscow. From Algeria to the Congo, from Senegal to Lake Chad—i.e., almost to the centre of Africa—stretches this vast tract of French territory. "At the present moment," to quote the words of the communique, " all our West African colonies—Algeria, Tunis, Senegal, Futa-Jallon, the Ivory Coast, the Soudan, and the Congo—are in communication by their respec- tive Hinterlands." But probably this will not convey much to the ordinary English reader. Perhaps we can best make him realise the immensity of the French West African Empire by pointing out that, with the exception of certain great German and English and other enclaves, the whole of the huge piece of Africa, which bulges out on the map towards the west now belongs to France.. She has all the connecting links, all that does not specifi- cally belong to some one else, and she cuts off short, the Hinterlands of all the Powers with possessions on the West African coast. Let us begin at the most western point of the coast-line of Tripoli in the Mediterranean, and travel round the coast, marking off all that is not French. First, we come to Tunis,—that is in the posses- sion of France just as Egypt is in our possession. Algiers comes next,—that is French. Then Morocco. Morocco is at present independent, but at the back of Morocco all the land, be it desert or cultivable, is French. Next comes a strip of Spanish coast, but it goes only a very little way inland, and all the back country is French. Next come the great French colonies of Senegambia and Futa-Jallon, with two little colonies embedded in them, one belonging- to us—the Gambia—and the other belonging to Portugal. Next come our Sierra Leone and independent Liberia, but here again the Hinterlands are all French. Next comes the French Ivory Coast colony, then the British Gold Coast, then German Togoland, and then French Dahomey. Here again all the Hinterlands beyond, say four hundred miles in- land, belong, since the signing of the Convention, to France. After that comes our Colony of Lagos, then the German Cameroons, and finally the French Congo,—the last French possession in West Africa. Here, too, the Hinter- lands have been cut off by the French, and our Colonies have been made into enclaves in the mighty French dominion. It is true that the Niger or Lagos enclave is a very vast one, and stretches now up to Lake Chad, which becomes hence- forth as international a sheet of water as the Lake of Con- stance. Still, it is an enclave, for, as we read the Convention, he who embarks upon Lake Chad from the British shore and steers eastward will land on French territory. In other words, Nigeria cannot now cross Lake Chad and expand beyond it. We should be glad to hear that this is not the true reading of the Convention, but we fear it is. We have travelled, then, round the map of Africa, from Tunis to the Congo, and found that France is everywhere the chief owner,—that hers is the great estate, and that the other Powers only have odd bits of land here and there. We do not say this in any grumbling spirit, for our odd bit- Nigeria—is very possibly worth as much as the great estate if Algiers and Tunis are not counted. We merely wish to make the public understand clearly that West, Africa as a political and geographical expression has finally passed to France, though we no doubt have carved one very valuable piece out of it.

Now that the feverish period of doing anything and everything in order to secure the lion's share in the scramble is over it will be very curious to see how France will deal with and develop her gigantic dominion. To do the thing thoroughly would absorb her energies for a generation. Will she be willing to make the necessary re- nunciation of other aims ? If she does not, and now that she has got West Africa begins to tire of Colonial work, she will have thrown away a great deal of money quite use- lessly. We can only wait and see, but we must not pretend that we think the teachings of past history support the notion that France will quietly and laboriously develop her West African Empire. Mean- time, we are also on our trial. Sir George Goldie—one of the most efficient, as 'well as one of the most high- minded, of our founders of Empire—has pegged us out a splendid claim, and. Mr. Chamberlain by his energy and determination has made that claim good against the world.- What are we going to do with it ? How, that is, are> we koing to make. use of the great Hausa States of Sokoto and Bernu, which are now in our full possession ? We hope by following out our Indian policy of "little by little," and not by rushing blindly into any attempt to make Colonies grovi like mushrooms in a night. As Bacon' said long ago, "Planting of countries is like planting of woods ; for you must make account to lose almost twenty years' profit, and expect your recompense in thelend." If we go slowly, we may make a possession out of the Hausa States so stable that we shall be able to use it and its soldiers to support our rule on the Nile, in Uganda, and in the South. If, on the other hand, we do not move discreetly and quietly, we may get involved in difficulties which will make Nigeria a curse rather than a blessing. Our first work, in our opinion, should be a judicious develop- ment of means of communication. Roads, railways, and improved waterways not only help trade in the only way in which it can be helped effectively by a Government, but also render:the maintenance of rule safe and easy. But we must not digress further into the subject of Nigeria. All we want to do on the present occasion is to make our readers realise three things. First, that the Niger agreement Is one honourable to England, and involves no loss 'of dignity, prestige, or of material advantage. Secondly, that it puts the seal, as it were, on the great West African Empire of France. Thirdly, that it acknowledges our undisputed right to a smaller but very important Empire,—that of the Hausa States.