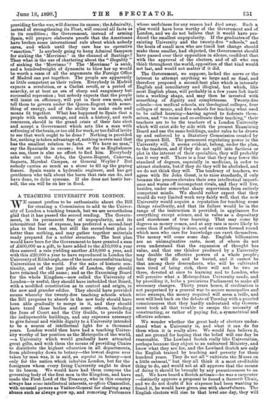 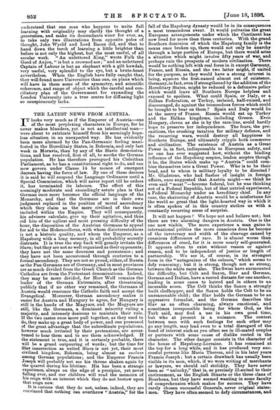 A TEACHING UNIVERSITY FOR LONDON. -wr E cannot profess to

be enthusiastic about the Bill V for creating a Commission to add to the Univer- sity of London a teaching branch, but we are nevertheless glad that it has passed the second reading. The Govern- ment, in its permanent fear of unpopularity, and its intermittent fear of expense, has preferred a second-best plan to the best one, but still the second-best plan is better than nothing, and may gather together materials ready prepared for a nobler structure. The best plan would have been for the Government to have granted a sum of .P.,400,000 as a gift, to have added to the £10,000 a year thus assured a rate yielding another £10,000 a year, and with this £20,000 a year to have reproduced in London the University of Edinburgh, one of the most successful teaching Universities in the world. For the sake of historic con- tinuity, and of the just pride of London, they should have retained the old name ; and as the Examining Board for the whole Kingdom—now called the University of London—is useful, they should have imbedded that Board, with a modified constitution as to control and origin, in the new and grander edifice. They should have provided means whereby the twenty-five teaching schools which the Bill proposes to absorb in the new body should have been able gradually to merge in it, and they should have. taxed those bodies and some others, including the Inns of Court and the City Guilds, to provide for the indispensable buildings, and any expenses necessary to give formal and visible dignity to a University intended to be a source of intellectual light for a thousand years. London would then have had a teaching Univer- sity worthy of her position as the Metropolis of the world, —a University which would gradually have attracted great gifts, and with them the means of providing Chairs to distribute the highest education in all departments, from philosophy down to botany—the lowest degree ever taken by man was, it is said, an segrotat in botany—not only for the nation which inhabits London, but for the foreigners whom every living University ought to draw to its bosom. We would have had them compose the governing body of the first men in the Kingdom, and have made the First Lord of the Treasury, who in this country always has some intellectual interests, ex-officio Chancellor, with unusual powers as Visitor-General for clearing away abuses such as always grow up, and removing Professors whose usefulness for any reason had died away. Such a, plan would have been worthy of the Government and of London, and we do not believe that it would have pro- duced the smallest unpopularity. If the graduates of the existing University and the twenty-five "schools," and the hosts of small men who are timid lest change should make them smaller, had objected, the Government should have passed over their opposition in silence, confident that with the approval of the electors, and of all who can think throughout the world, opposition of that kind would, not last, and would not matter if it did.

The Government, we suppose, lacked the nerve or the interest to attempt anything so large and so final, and therefore proposed a second-best plan which is intensely English and conciliatory and illogical, but which, like most English plans, will probably in a few years lick itself into a working shape, and may then be invested with something of dignity and completeness. Twenty-five schools—ten medical schools, six theological colleges, four colleges of music, and five schools for teaching what used to be called learning—having agreed to federate them- selves, and." to raise and co-ordinate their teaching," their teachers are to be the teachers of a London University which will exist side by side with the present Examining Board and use the same buildings, under rules to be drawn up and enforced by a Statutory Commission created by the present Bill The permanent regulating power in the University will, it seems evident, belong, under the plan, to the teachers, and if they do not split into factions or plot in the interest of their specialties, they will probably use it very well. There is a fear that they may lower the standard. of degrees, especially in medicine, in order to- attract students, but if they do they will be abolished, and we do not think they will. The tendency of teachers, we agree with Sir John Gorst, is to raise standards, if only because the process elevates their own intellectual import- ance and warns off incompetent rivals, and they will live, besides, under somewhat sharp supervision from entirely- competent minds. We should rather expect that they would do very limited work very fairly well, that the new University would acquire a reputation for teaching some things excellently, and that its failure would be in the- range of the instruction it provided, in appliances for everything except science, and in value as a depositary and storehouse of true learning. That may come by degrees as money comes, and at any rate is more likely to. come than if nothing is done, and no centre formed round which men who care for knowledge can exert themselves. The money will come some day. English billionaires are an unimaginative caste, most of whom do not even understand that the expansion of thought has value, and that one thinker produced by a University may double the effective powers of a whole people;. but they will die and be buried, and it cannot be that among their descendants, who will be cultivated. men tired of being rich, there will not be two or three, devoted at once to learning and to London, who will perceive what a Metropolitan University needs, and by providing it, bribe a penurious Parliament to make all necessary changes. Thirty years hence, if civilisation is not pauperised by a general war to secure monopolies and seize swamps, the money required. will seem a trifle, and men will look back on the debate of Tuesday with a puzzled consciousness that they hardly understand why Govern- ment took all that trouble to escape the necessity of constructing, or rather of paying for, a symmetrical and effective scheme.

We wonder whether the great body of electors under- stand what a University is, and what it can do for them when it is really alive. We would fain believe it, and see ground for hoping that the belief will one day be reasonable. The Lowland Scotch really like Universities, perhaps because they object to an unlearned Ministry, and know what they are for, and the Lowland Scotch are only the English trained by teaching and poverty for three hundred years. They do not all " cultivate the Muses on a little oatmeal," but they all think it a most creditable' thing to do, and would not at all approve that the means of doing it should be brought by any penuriousness to an end. We have heard a Scotch artisan—he was a carpenter —distinctly approve a proposal to found a Sanscrit and we do not doubt if his sixpence had been wanting to found it, he would have given ene with cheerfulness. The English electors will rise to that level one day, they will understand that one man who happens to unite full learning with originality may clarify the thought of a generation, and make its descendants wiser for ever, as, to take only two illustrations from opposite poles of thought, John Wyclif and Lord Bacon did, and that to hand down the torch of learning a little brighter than before is not only the highest, but the most useful, of all secular work. " An unlettered King," wrote Fulk the Good of Anjou, " is but a crowned ass ; " and an unlettered Captain of Labour is but an elephant with a gilt howdah, very useful, very splendid to the eye, but a brute-beast nevertheless. When the English have fully caught that, they will found more Universities than one, on plans which will have in them some of the symmetry, and scientific coherence, and range of object which the careful and con- ciliatory plan of the Government for expanding the London University into a true centre for diffusing light so conspicuously lacks.