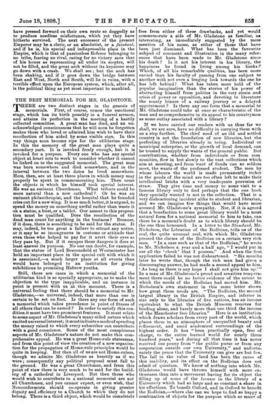 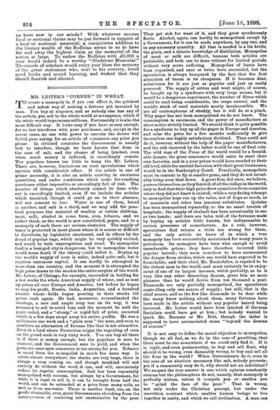 IIIIERE are two distinct stages in the genesis of memorials. First, of course, comes the emotional stage, which has its birth possibly in a funeral sermon, and attains its perfection in the meeting of a hastily collected committee. A great man has died, and an un- acknowledged consciousness that he will soon be forgotten makes those who loved or admired him wish to have their recollection of him aided by some visible sign. In this way things soon become ripe for the utilitarian stage. In this the memory of the great man plays quite a secondary part. It is invoked freely enough, but it is invoked for a purpose. Every one who has any special object at heart sets to work to consider whether it cannot be linked on to the suggested memorial. The great man was born somewhere and died somewhere, and in the interval between the two dates he lived somewhere. Here, then, are at least three places in which money may properly be spent in commemorating him. Then come the objects in which he himself took special interest. He was an eminent Churchman. What tribute could be more natural than a new cathedral ? Or he was an eminent philanthropist, and the hospital that he founded cries out for a new wing. It is so much better, it is argued, to spend the money on something useful rather than waste it on a statue, a bust, or a tablet. Our assent to this proposi- tion must be qualified. Does the recollection of the dead man count for anything in the business ? Because, if it does, there is something to be said for the statue. It may, indeed, be too great a failure to attract any notice, or it may be so incongruous in costume or attitude that even those who helped to pay for it avert their eyes as they pass by. But if it escapes these dangers it does at least answer its purpose. No one can doubt, for example, that the statue of Lord Beaconsfield at Westminster has held an important place in the special cult with which it is associated, —a much larger place at all events than would have belonged to an institution for giving exhibitions to promising Hebrew youths.

Still, there are cases in which a. memorial of the utilitarian kind is so specially appropriate, as to make the objection to the type inapplicable, and an instance in point is present with us at this moment. There is a universal feeling that there should be a memorial to Mr. Gladstone,—so universal, indeed, that more than one is certain to be set on foot. Is there any one form of such a memorial which takes precedence in point of fitness of all others that can be named ? In order to satisfy this con- dition it must have two prominent features. It must relate to some aspect of Mr. Gladstone's many-sided nature which excited universal interest; it must indicate a mode of spending the money raised to which every subscriber can contribute with a good conscience. Some of the most conspicuous aspects of Mr. Gladstone's nature do not make this com- prehensive appeal. He was a, great Home-rule statesman, and from this point of view the creation of a new organisa- tion for the propagation of Home-rule principles would be quite in keeping. But then all of us are not Home-rulers, though we admire Mr. Gladstone as heartily as if we were ; consequently any political proposal must fall to the ground. He was a great Churchman, and from this point of view there is very much to be said for the build- ing of a cathedral in Liverpool. But then those who would wish to contribute to a national memorial are not all Churchmen, and you cannot expect, or even wish, that Nonconformists should co-operate in giving greater dignity and efficiency to a Church to which they do not belong. There is a third object, which would be completely free from either of these drawbacks, and yet would commemorate a side of Mr. Gladstone as familiar, as interesting, as immediately suggested by the mere mention of his name, as either of those that have been just dismissed. What has been the favourite subject of comment and illustration in the many refer- ences that have been made to Mr. Gladstone since his death ? Is it not his interest in his library, the happiness he found in living among his books ' Which, of all his remarkable qualities, has been more envied than his faculty of passing from one subject to another with not even a longing look towards the one he has left behind? What has taken more hold of the popular imagination than the stories of his power of abstracting himself from politics in the very strain and crisis of power or opposition, and devoting to literature the scanty leisure of a railway journey or a delayed appointment ? Is there any one form that a memorial to Mr. Gladstone could take at once so characteristic of the man and so comprehensive in its appeal to his countrymen as some outlay associated with a library ?

If we have carried our readers with us thus far we shall, we are sure, have no difficulty in carrying them with us a. step further. The chief need of an old and settled country is not the foundation of new libraries, but the perfecting of libraries already in being. Individual or municipal enterprise, or the growth of local demand, can be trusted to supply the wants of the general public. But contributions, whether from individuals or from com munities, flow in but slowly to the vast collections which• aim at meeting, and from want of funds can so seldom meet, the wants of the professed student. The men by whose labours the world is made permanently richer in the goods of the mind are too often left to make their intellectual bricks with a. very inadequate provision of straw. They give time and money to some visit to aV famous library only to find perhaps that the one book they specially wanted is not in the collection. That is a. very disheartening incident alike to student and librarian, and we can imagine few things that would have more aroused Mr. Gladstone's sympathy. Nor, if it is agreed that a benefaction to some great library would be a most natural form for a national memorial to him to take, can there be a moment's doubt as to which library should be the one thus honoured. In a letter to the Standard. Mr. Nicholson, the Librarian of the Bodleian, tells us of the zeal, the quite unusual zeal, with which Mr. Gladstone- pressed the claims of the Bodleian on a certain very rich man. " In a case such as that of the Bodleian," he wrote to Mr. Nicholson a year and a half ago, " I would put in use all the ' cheek' that I possess." And when the first application failed he was not disheartened. " Six months later he wrote that, though the rich man had given a discouraging answer, he had made a second appeal to him. ' As long as there is any hope I shall not give him up.' " In a man of Mr. Gladstone's proud and sensitive tempera- ment there could be no better evidence of the extent to which the needs of the Bodleian had moved him. Mr. Nicholson's own statement in this same letter shows how great these needs are. " The Bodleian, the second largest library in the British Empire, and inferior in size only to the libraries of five nations, has an income equivalent to what the British Museum receives for binding alone, and barely more than one-third the income- of the Manchester free libraries." Here is an institution which draws scholars from every part of the world, which places them in an atmosphere of unequalled beauty and refinement, and amid academical surroundings of the highest order. It has " been practically open, free of- charge, to the entire learned world for nearly three hundred years," and during all that time it has never received one penny from " the public purse or from any corporation outside our own University," and unfortu- nately the pence that the University can give are but few. The fall in the value of land has been the cause of this inability, and its effect on the Bodleian does not admit of question. We know of nothing into which Mr. Gladstone would have thrown himself with more en- thusiasm than into a movement having for its object the filling up of some of the lacumn in the library of a University which had so large and so constant a share in his affections. To benefit Oxford, and in Oxford to benefit the Bodleian,—where else can we hope to find so happy a combination of objects for the purpose which so many of ,us have now in our minds ? With whatever success local or sectional claims may be put forward in support of a local or sectional memorial, a conspicuous addition to the literary wealth of the Bodleian seems to us to have far and away the highest claim as the memorial of the nation at large. To endow the Bodleian with <25,000 a year would indeed be a worthy "Gladstone Memorial." Thousands of scholars would every year bless the memory of the great statesman who, next to his country, loved good books and sound learning, and wished that they should flourish and abound.