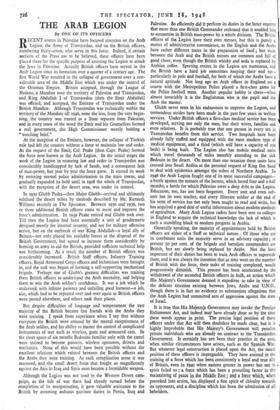 By ONE OF ITS OFFICERS

RECENT events in Palestine have focused attention on the Arab Legion, the Army of Transjordan, and on the British officers, numbering thirty-seven, who serve in this force. Indeed, if certain sections of the Press are to be believed, these officers have been placed there for the specific purpose of assisting the Legion to attack the Jews in Palestine. Actually British officers have served in the Arab Legion since its formation over a quarter of a century ago. The first World War resulted in the collapse of government over a con- siderable area of the Middle East which was under the control of the Ottoman Empire. Britain accepted, through the League of Nations, a Mandate over the territory of Palestine and Transjordan, and King Abdullah I of Transjordan (then the Emir Abdullah) was offered, and accepted, the Emirate of Transjordan under the British Mandate. Although Transjordan was technically within the territory of the Mandate till 1946, none the less, from the very begin- ning, the country was treated as a State separate from Palestine, and in every sense of the word the Emir and his Counsellors formed a real government, the High Commissioner merely holding a " watching brief."

At the inception of the Emirate, however, the collapse of Turkish rule had left the country without a force to maintain law and order. At the request of the Emir, Col. Peake (then Capt. Peake) formed the force now known as the Arab Legion. In the initial stages the work of the Legion in restoring law and order in Transjordan was considerably handicapped by lack of funds, and a consequent lack of man-power, but year by year the force grew. It started its work by restoring normal police administration in the main towns, and gradually expanded its hold until in 1928 the whole of Transjordan, with the exception of the desert area, was under its control.

In 193o Glubb Pasha—then Major Glubb—arrived and ultimately subdued the desert tribes by methods described by Mr. Kenneth Williams recently in The Spectator. Between 193o and 1939, two er three additional British officers came to assist and improve the force's administration. In 1939 Peake retired and Glubb took over. Till then the Legion had been essentially a unit of gendarmerie designed merely for internal security, and not for military offensive action, but on the outbreak of war King Abdullah—a loyal ally of Britain—not only placed his available forces at the disposal of the British Government, but agreed to increase them considerably by forming an army to aid the British, provided sufficient technical help was forthcoming. As a result the number of British officers was considerably increased. British Staff officers, Infantry Training officers, Royal Armoured Corps officers and technicians were brought in, and the task was begun of forming a self-supporting mechanised brigade. Perhaps one of Glubb's greatest difficulties was training these British officers to understand the Arab mentality, and helping them to win the Arab soldier's confidence. It was a job which he undertook with infinite patience and unfailing good humour—a job, alas, which had to be repeated over and over again as British officers were posted elsewhere, and others took their places.

But despite difficulties of language and temperament the vast majority of the British became fast friends with the Arabs they were training. I speak from experience when I say that without exception the British were amazed by the mental receptiveness of the Arab soldier, and his ability to master the control of complicated instruments of war such as wireless, guns and armoured cars. In the short space of six months Bedouins familiar only with the camel were trained to become gunners, wireless operators, drivers and mechanics. None of this would have been possible without the excellent relations which existed between the British officers and the Arabs they were training. As each complication arose it was mastered, and the small desert force that fought so magnificently against the Axis in Iraq and Syria soon became a formidable weapon.

Although the Legion was not used in the Western Desert cam- paign, as the tide of war there had already turned before the completion of its reorganisation, it gave valuable assistance to the British by assuming arduous garrison duties in Persia, Iraq and Palestine. So efficiently did it perform its duties in the latter country that more than one British Commander reckoned that it enabled him to economise in British man-power by a whole division. The British officers of the Legion have their own messes, but this is purely a matter of administrative convenience, as the English and the Arabs have rather different tastes in the preparation of food ; but visits between the Arab and the British messes are common and full of good cheer, even though the British whisky and soda is replaced by Arabian coffee. Sporting events in the Legion are numerous, and the British have a hard job sometimes keeping their end up— particularly in polo and football, for both of which the Arabs have a natural aptitude. Not long ago an Arab officer in England on a course with the Metropolitan Police played a first-class game for the Police football team. Another popular hobby is chess—when almost invariably it is the Englishman who is the pupil and the Arab the master.

Glubb never rests in his endeavours to improve the Legion, and tremendous strides have been made in the past few years in welfare services. Under British officers a first-class medical service has been developed, serving not only the men, but their wives, families and even relatives. It is probably true that one person in every ten in Transjordan benefits from this service. Two hospitals have been already fully staffed and equipped with the most modern type of medical equipment, and a third (which will have a capacity of 25o beds) is being built. The Legion also has mobile medical units which travel thousands of miles monthly attending to the sick Bedouin in the desert. On more than one occasion these units have crossed into Saudi Arabia at the personal request of King Ibn Saud to deal with epidemics amongst the tribes of Northern Arabia. In 1946 the Arab Legion fought one of its most successful campaigns— a battle against the menace of the locusts, which lasted four and a-half months, a battle for which Palestine owes a deep debt to the Legion. Education, too, has not been forgotten. Every unit and even sub- unit has its own teacher, and every illiterate soldier at the end of his term of service has not only been taught to read and write, but has acquired a good deal of useful information about modern methods of agriculture. Many Arab Legion cadets have been sent to colleges in England to acquire the technical knowledge the lack of which is such a stumbling block to modern progress in Arabia.

Generally speaking, the majority of appointments held by British officers are either of a Staff or technical nature. Of those who are in combatant units the majority serve in an advisory capacity ; at present 5o per cent. of the brigade and battalion commanders are British, but are slowly being replaced by Arabs. Not the least important of their duties has been to train Arab officers to supersede them, and it was always the intention that as time went on the number of British with the force, their tasks of training completed, would progressively diminish. This process has been accelerated by the withdrawal of the seconded British officers in bulk, an action which His Majesty's Government deemed it expedient to take in view of the delicate situation existing between Jews, Arabs and U.N.O., though there is in fact no evidence to substantiate allegations that the Arab Legion had committed acts of aggression against the state of Israel.

It is true that His Majesty :s Government may invoke the Foreign Enlistments Act, and indeed may have already done so by the time these words appear in print. The precise legal position of these officers under that Act will then doubtless be made clear, but it is highly improbable that His Majesty's Government will penalise private individuals who are already on contract to the Transjordan Government. It certainly has not been their practice in the past, when similar circumstances have arisen, such as the Spanish War. But whatever legal construction is placed upon the Act, the moral position of these officers is impregnable. They have assisted in the training of a force which has been consistently a loyal and true ally of Britain, even in 1940 when nations greater in power but not in spirit failed us ; a force which has been a prevailing factor in the maintaining of peace in the Middle East ; and a force which, when provoked into action, has displayed a fine spirit of chivalry towards its opponents, and a discipline which has been the admiration of all beholders.