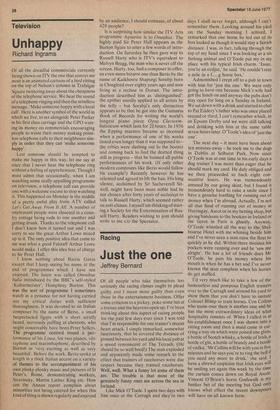 Of all the dreadful commercials currently being shown on ITV the one that annoys me most is an animated cartoon of a bird sitting on the top of Nelson's column in Trafalgar Square twittering away about the cheapness of the telephone service. We hear the sound of a telephone ringing and then the mindless message, 'Make someone happy with a local call'. Here is another symbol of the world in which we live, to set alongside Peter Parker in his first class carriage and the GPO wasting its money on commercials encouraging people to waste their money making pointless telephone calls to their neighbours simply in order that they can 'make someone happy'.

Lest someone should be tempted to make me happy in this way, let me say at once that I never hear the telephone ring without a feeling of apprehension. Though I must admit that occasionally, when I am watching some really appalling programme on television, a telephone call can provide one with a welcome excuse to stop watching it. This happened on Monday in the middle of a pretty awful play from ATV called Let's Get Away From It All. A number of unpleasant people were closeted in a country cottage being rude to one another and getting drunk. Thanks to the telephone call I don't know how it turned out and I was sorry to see the great Arthur Lowe mixed up in it. The only positive idea that came to me was what a good Falstaff Arthur Lowe would make. I offer this idea free of charge to Sir Peter Hall.

I know nothing about Barrie Gavin except that I keep seeing his name at the end of programmes which I have not enjoyed. The latest was called Omnibus Italia introduced by the BBC's self-styled • Kailturmeister, Humphrey Burton. This was the sort of programme I sometimes watch as a penance for not having carried out my critical duties with sufficient thoroughness. It was devoted to an Italian composer by the name of Berio, a small bespectacled figure with a short scruffy beard, nervously puffing at cheroots, who might conceivably have been Peter Sellers. The programme centred round a performance of his Linea, for two pianos, vibraphone and marimbaphone, described by Burton as 'very, exciting as well as very beautiful'. Before the work, Berio spoke at length in a thick Italian accent on a variety of themes to the accompaniment of his own plinky-plonky music and pictures of St Peter's, Rome, demonstrating workers, Stravinsky, Martin Luther King etc. How can the Annan report complain about minorities not being catered for when this kind of thing is shown regularly and enjoyed by an audience, I should estimate, of about 429 people?

It is surprising how similar the ITV Arts programme Aquarius is to Omnibus. The highly paid Sir Peter Hall appears as the Burton figure to utter a few words of introduction. On Saturday he then gave way to Russell Harty who is ITV's equivalent to Melvyn Bragg, the man who is never off the screen. Harty, too; had a composer to offer, an even more bizarre one than Berio by the name of Kaikhosru Shapurgi Sorabji born in Chingford over eighty years ago and now living as a recluse in Dorset. The introduction described him as 'distinguished': the epithet usually applied to all artists by the telly — but Sorabji's only distinction appears to be that he got into the Guinness Book of Records for writing the world's longest piano piece Opus Clavicembalisticum which lasts for 2f hours. In 1936 the Epping maestro became so incensed when a performance of one of his works lasted even longer than it was supposed to — the critics were dashing out to the boozer and coming back to find the dratted thing still in progress — that he banned all public performances of his work. (If only other modern composers like Berio would follow his example!) Recently however he has relented and agreed to lift the ban. His long silence, acclaimed by Sir Sacheverell Sitwell, might have been more noble had he nat chosen after forty years of seclusion to talk to Russell Harty, which seemed rather an anti-climax. I myself am thinking of starting a Society for the Extermination of Russell Harty. Readers wishing to join should write to me cio the Spectator.