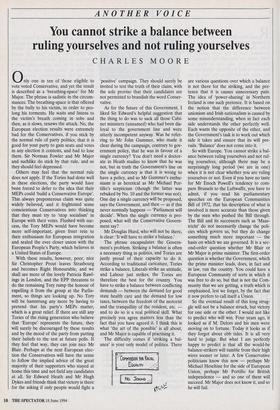 Others may feel that the normal rule does not apply. If the Tories had done well in these elections, the party would have been forced to defer to the idea that their MEPs could 'build a Conservative Europe'. This always preposterous claim was quite widely believed, and it frightened some conscientious Conservatives into thinking that they must try to 'stop socialism' in Europe with their votes. Flushed with suc- cess, the Tory MEPs would have become more self-important, given freer rein to their enthusiasm for European integration and sealed the ever closer union with the European People's Party, which believes in a United States of Europe.

With these results, however, poor, nice Sir Christopher Prout leaves Strasbourg and becomes Right Honourable, and we shall see more of the lovely Patricia Rawl- ings in London, and the EPP threatens to do the remaining Tory rump the honour of expelling it from the group at the Parlia- ment, so things are looking up. No Tory will be hamstrung any more by having to pretend that his party's MEPs matter, which is a great relief. If there are still any Tories of the rising generation who believe that 'Europe' represents the future, they will surely be discouraged by these results and by the mood of the party from putting their beliefs to the test at future polls. If they feel that way, they can join nice Mr Blair. Perhaps at the next European elec- tion the Conservatives will have the sense to follow the implied advice of the great majority of their supporters who stayed at home this time and not field any candidates at all. Sir Edward Heath and Mr Hugh Dykes and friends think that victory is there for the asking if only people would fight a `positive' campaign. They should surely be invited to test the truth of their claim, with the sole proviso that their candidates are not permitted to brandish the word Conser- vative.

As for the future of this Government, I liked Sir Edward's helpful suggestion that the thing to do was to sack all those Cabi- net ministers (unnamed) who had been dis- loyal to the government line and were utterly incompetent anyway. Was he refer- ring to Mr John Gummer, who made it clear during the campaign, contrary to gov- ernment policy, that he was in favour of a single currency? You don't need a doctor- ate in Heath studies to know that he was not, but in truth the Government's line on the single currency is that it is wrong to have a policy, and so Mr Gummer's enthu- siasm is as heretical as Mr Michael Por- tillo's scepticism (though the latter was rebuked by No. 10 and the former was not). One day a single currency will be proposed, says the Government, and then — as if this never normally happens — 'Parliament will decide'. When the single currency is pro- posed, what will the Conservative Govern- ment say?

Mr Douglas Hurd, who will not be there, is clear: 'It will have to strike a balance.'

The phrase encapsulates the Govern- ment's problem. Striking a balance is often a necessary thing in politics, and Tories are justly proud of their capacity to do it. According to traditional caricature, Tories strike a balance, Liberals strike an attitude, and Labour just strikes; the Tories are therefore the best for the country. You have to strike a balance between conflicting demands — between the demand for good state health care and the demand for low taxes, between the freedom of the motorist and the tranquillity of the resident, etc. — and to do so is a real political skill. What precisely you agree matters less than the fact that you have agreed it. I think this is what 'the art of the possible' is all about, and Mr Major is capable of practising it.

The difficulty conies if 'striking a bal- ance' is your only model of politics. There are various questions over which a balance is not there for the striking, and the pre- tence that it is causes unnecessary pain. The idea of 'power-sharing' in Northern Ireland is one such pretence. It is based on the notion that the difference between unionism and Irish nationalism is caused by some misunderstanding, when in fact each side understands the other perfectly well. Each wants the opposite of the other, and the Government's task is to work out which side it takes and ensure that its will pre- vails. 'Balance' does not come into it.

So with Europe. You cannot strike a bal- ance between ruling yourselves and not rul- ing yourselves, although there may be a surprisingly long period (we are in one) when it is not clear whether you are ruling yourselves or not. Even if you have no taste for Mr Enoch Powell's tendency to com- pare Brussels to the Luftwaffe, you have to admit, if you read his parliamentary speeches on the European Communities Bill of 1972, that his description of what is involved is more accurate than those given by the men who pushed the Bill through. The Bill and its successors such as 'Maas- tricht' do not necessarily change the poli- cies which govern us, but they do change something much more important — the basis on which we are governed. It is a sec- ond-order question whether Mr Blair or Mr Major is prime minister. The first-order question is whether the Government, which the prime minister leads, does, in fact and in law, run the country. You could have a European Community of sorts in which it was free to do so, but that is not the Com- munity that we are getting, a truth which is emphasised, lest we forget, by the fact that it now prefers to call itself a Union.

So the eventual result of this long strug- gle will not be a balance struck, but victory for one side or the other. I would not like to predict who will win. Four years ago, it looked as if M. Delors and his men were moving on to fortune. Today it looks as if they forgot about ebb tides. It is all very hard to judge. But what I am perfectly happy to predict is that all the would-be balance-strikers will tumble from their high wires sooner or later. A few Conservative politicians know this now — perhaps Mr Michael Heseltine for the side of European Union, perhaps Mr Portillo for British independence — and so one of them will succeed. Mr Major does not know it, and so he will fail.