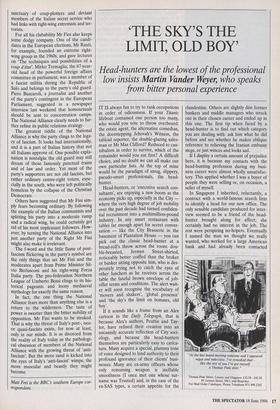 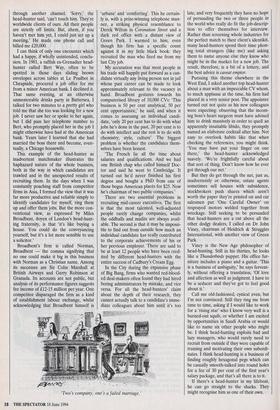 `THE SKY'S THE LIMIT, OLD BOY'

IT IS always fun to try to rank occupations in order of odiousness. If your Titanic lifeboat contained one person too many, who would you vote to throw overboard: the estate agent, the alternative comedian, the doorstepping Jehovah's Witness, the tabloid reporter, the double-glazing sales- man or Mr Max Clifford? Reduced to can- nibalism in order to survive, which of the remainder would you eat first? A difficult choice, and no doubt we can all make our own particular lists. At the top of mine would be the paradigm of smug, slippery, pseudo-smart professionals, the head- hunter.

Head-hunters, or 'executive search con- sultants', are enjoying a new boom as the economy picks up, especially in the City where the very high degree of job mobility over the past decade had turned confiden- tial recruitment into a multimillion-pound industry. In any smart restaurant with tables far enough apart for secret conver- sation — like the City Brasserie in the basement of Plantation House — you can pick out the classic head-hunter at a bread-roll's throw across the room: dou- ble-breasted, Jermyn Street-shirted, noticeably better coiffed than the broker or banker sitting opposite him, who is des- perately trying not to catch the eyes of other lunchers as he receives across the table the fateful brown envelope of job- offer terms and conditions. The alert wait- er will soon recognise the vocabulary of `movers and shakers', 'global presence' and 'the sky's the limit on bonuses, old boy'.

If it sounds like a frame from an Alex cartoon in the Daily Telegraph, that is because Alex's authors, Peattie and Tay- lor, have refined their creation into an uncannily accurate reflection of City soci- ology, and because the head-hunters themselves are particularly easy to carica- ture. Many acquire a special, plummy tone of voice designed to lend authority to their profound ignorance of their clients' busi- nesses. Many are ex-army officers whose only remaining weapon is ineffable smoothness (I once met one whose sur- name was Trusted) and, in the case of the ex-SAS types, a certain appetite for the

clandestine. Others are slightly dim former bankers and middle managers who struck out in their chosen career and ended up in this one. The first tip when faced by a head-hunter is to find out which category you are dealing with: ask him what he did before and see whether he makes oblique reference to relieving the Iranian embassy siege, or just winces and looks sad.

If I display a certain amount of prejudice here, it is because my contacts with the head-hunting profession during my busi- ness career were almost wholly unsatisfac- tory. This applied whether I was a buyer of people they were selling or, on occasion, a seller of myself.

In Singapore I inherited, reluctantly, a contract with a world-famous search firm to identify a head for our new office. The only sensible candidate produced for inter- view seemed to be a friend of the head- hunter brought along for effect; she certainly had no interest in the job. The rest were perspiring no-hopers. Eventually I named the man we thought we really wanted, who worked for a large American bank and had already been contacted through another channel. 'Sorry,' the head-hunter said, 'can't touch him. They're worldwide clients of ours. All their people are strictly off limits. But, ahem, if you haven't met him yet, I could just set up a meeting.' He made one phone call and billed me £20,000.

I can think of only one encounter which had a happy, if wholly unintended, conclu- sion. In 1981, a raffish ex-Grenadier head- hunter called Bert Way, often to be spotted in those days sliding brown envelopes across tables at Le Poulbot in Cheapside, procured a job offer for me from a minor American bank. I declined it. That same evening, at an otherwise unmemorable drinks party in Battersea, I talked for two minutes to a pretty girl who told me that she too was looking for a new job. I never saw her or spoke to her again, but I did pass her telephone number to Bert, who promptly placed her in the job I might otherwise have had at the American bank. Years later I learned that she had married the boss there and become, even- tually, a Chicago housewife.

This example of the head-hunter as inadvertent matchmaker illustrates the haphazard nature of the whole business, both in the way in which candidates are trawled and in the unexpected results of recruiting them. In the days when I was constantly poaching staff from competitor firms in Asia, I formed the view that it was far more productive and reliable simply to identify candidates for myself, ring them up and offer them jobs. But the more con- ventional view, as expressed by Miles Broadbent, doyen of London's head-hunt- ing fraternity, is that 'it's like buying a house. You could do the conveyancing yourself, but it's a lot more sensible to use a solicitor.'

Broadbent's firm is called Norman, Broadbent — the comma signifying that no one could make it big in this business with Norman as a Christian name. Among its successes are Sir Colin Marshall at British Airways and Gerry Robinson at Granada. Its accounts are not public, but analysis of its performance figures suggests fee income of £12-15 million per year. One competitor disparaged the firm as a kind of establishment labour exchange, whilst acknowledging that Broadbent himself is `urbane' and 'comforting'. This he certain- ly is, with a prize-winning telephone man- ner, a striking physical resemblance to Derek Wilton in Coronation Street and a dark red office with a distant view of Green Park. I warmed to him, even though his firm has a specific count against it in my little black book: they recruited the man who fired me from my last City job.

My accusation was that most people in his trade will happily put forward as a can- didate virtually any living person not in jail whose past career can be made to look approximately relevant to the vacancy in hand. Broadbent gestures towards his computerised library of 10,000 CVs: 'This business is 50 per cent analytical, 50 per cent opportunistic,' he said, and when it comes to assessing an individual candi- date, 'only 20 per cent has to do with what jobs he's done in the past, 20 per cent is to do with intellect and the rest is to do with chemistry, style, culture'. The biggest problem is whether the candidates them- selves have been honest.

The French lie all the time about salaries and qualifications. And we had one British chap who called himself Doc- tor and said he went to Cambridge. It turned out he'd never finished his first degree and bought a PhD from one of those bogus American places for $25. Now he's chairman of two public companies.'

There are two essential problems in recruiting mid-career executives. The first is that the most talented, well-adjusted people rarely change companies, whilst the oddballs and misfits are always avail- able. The second is that it may be impossi- ble to find out from outside how much an individual candidate has really contributed to the corporate achievements of his or her previous employer. There are said to be at least 12 people who have been cred- ited by different head-hunters with the entire success of Cadbury's Cream Egg.

In the City during the expansive phase of Big Bang, firms who wanted red-blood- ed deal-makers often found they had hired boring administrators by mistake, and vice versa. For all the head-hunters' claim about the depth of their research, they cannot actually talk to a candidate's imme- diate colleagues about him until it's too `Two's company, one's a failed marriage.' late, and very frequently they have no hope of persuading the two or three people in the world who really do fit the job-descrip- tion to offer themselves for interview. Rather than screening whole industries for the perfect match to their client's identikit, many head-hunters spend their time phon- ing total strangers (like me) and asking them to name anyone else they know who might be in the market for a new job. The result, therefore, is a bit of a lottery, and the best advice is caveat emptor.

Pursuing this theme elsewhere in the West End, I asked another top head-hunter about a man with an impeccable CV whom, to much applause at the time, his firm had placed in a very senior post. The appointee turned out not quite as his new colleagues were expecting: observing that the incom- ing boss's heart surgeon must have advised him to drink massively in order to quell an apparently insatiable libido, they promptly named an elaborate cocktail after him. Not easy to overlook habits like that when checking the references, you might think. `You may have put your finger on one there,' the head-hunter acknowledged suavely. 'We're frightfully careful about that sort of thing. Don't know how he ever got through our net.'

But they do get through the net, just as, inadvertently or otherwise, estate agents sometimes sell houses with subsidence, stockbrokers push shares which aren't worth the paper they're printed on and car salesmen put 'One Careful Owner' on resprayed motors welded together from wreckage. Still seeking to be persuaded that head-hunters are a cut above all the other dodgy dealers, I called on Dr John Viney, chairman of Heidrich & Struggles International, with another view of Green Park.

Viney is the New Age philosopher of head-hunting. Still in his thirties, he looks like a Thunderbirds puppet. His office fur- niture includes a piano and a guitar. 'This is a business of ambiguity,' he says fervent- ly, without offering a translation, 'Of love and affection as well as judgment. I have to be a seducer and they've got to feel good about it.'

Call me old-fashioned, cynical even, but I'm not convinced. Still they ring me from time to time, asking if I would like to work for a 'rising star' who I know very well is a burned-out squib, or whether I am excited by opportunities in Saudi Arabia or would like to name six other people who might be. I think head-hunting exploits bad and lazy managers, who would rarely need to recruit from outside if they were capable of training and motivating their own subordi- nates. I think head-hunting is a business of finding roughly hexagonal pegs which can be casually smooth-talked into round holes for a fee of 30 per cent of the first year's salary package, and that's all there is to it.

If there's a head-hunter in my lifeboat, he can go straight to the sharks. They might recognise him as one of their own.