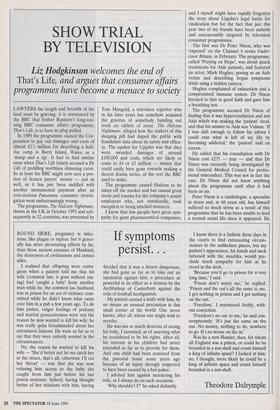 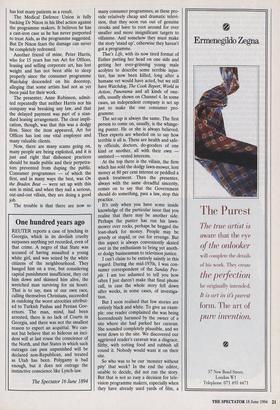 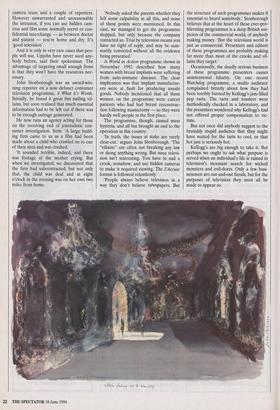 Liz Hodgkinson welcomes the end of That's Life, and argues that consumer affairs

programmes have become a menace to society

LAWYERS the length and breadth of the land must be grieving: it is announced by the BBC that Esther Rantzen's long-run- ning BBC consumer affairs programme, That's Life, is to have its plug pulled.

In 1989 the programme caused the Cor- poration to pay out damages and costs of almost £11/4 million for describing a holi- day camp in Barry Island, Wales, as a `dump and a tip'. It had to find similar sums when That's Life falsely accused a Dr Gill of peddling worthless slimming cures. So at least the BBC might now save a por- tion of licence payers' money — just as well, as it has just been saddled with another monumental payment after an over-zealous Panorama consumer investi- gation went embarrassingly wrong.

The programme, The Halcion Nightmare, shown in the UK in October 1991 and sub- sequently in 32 countries, was presented by Tom Mangold, a television reporter who in his later years has somehow acquired the gravitas of somebody handing out truth on tablets of stone. The Halcion Nightmare, alleged how the makers of this sleeping pill had duped the public with fraudulent data about its safety and effica- cy. The upshot for Upjohn was that they were awarded damages of around £100,000 and costs, which are likely to come to £4 or £5 million — money that could easily have gone towards making a decent drama series, of the sort the BBC used to make.

The programme caused •Halcion to be taken off the market and has caused great stress and trauma for the company's senior employees who, not unnaturally, took exception to being labelled monsters.

I know that few people have great sym- pathy for giant pharmaceutical companies, and I myself might have rapidly forgotten the story about Upjohn's legal battle for vindication but for the fact that just this year two of my friends have been unfairly and unreasonably targeted by television consumer programmes.

The first was Dr Peter Nixon, who was `exposed' on the Channel 4 series Under- cover Britain, in February. The programme, called 'Preying on Hope', was about quack treatments for Aids patients, and featured an actor, Mark Hughes, posing as an Aids victim and describing bogus symptoms while using a hidden camera.

Hughes complained of exhaustion and a compromised immune system. Dr Nixon listened to him in good faith and gave him a breathing test.

The programme accused Dr Nixon of finding that it was hyperventilation and not Aids which was making the 'patient' tired, and that his answer to Aids was Valium. 'If I was daft enough to follow his advice I could ruin what is left of my life by becoming addicted,' the 'patient' said on screen.

He added that his consultation with Dr Nixon cost £275 — true — and that Dr Nixon was currently being investigated by the General Medical Council for profes- sional misconduct. This was not in fact the case. Dr Nixon did not know anything about the programme until after it had been on air.

Peter Nixon is a cardiologist, a specialist in stress and, at 68 years old, has himself suffered so much stress as a result of this programme that he has been unable to lead a normal social life since it appeared. He has lost many patients as a result.

The Medical Defence Union is fully backing Dr Nixon in his libel action against the programme makers. It believes he has a cast-iron case as he has never purported to treat Aids, as the programme suggested. But Dr Nixon fears the damage can never be completely redressed.

Another friend of mine, Peter Harris, who for 15 years has run Art for Offices, leasing and selling corporate art, has lost weight and has not been able to sleep properly since the consumer programme Watchdog descended on his doorstep, alleging that some artists had not as yet been paid for their work.

The presenter, Anne Robinson, admit- ted repeatedly that neither Harris nor his company was breaking any law, and that the delayed payment was part of a stan- dard leasing arrangement. The clear impli- cation, though, was that this was a dodgy firm. Since the item appeared, Art for Offices has lost one vital employee and many valuable clients.

Now, there are many scams going on, many people are being exploited, and it is just and right that dishonest practices should be made public and their perpetra- tors prevented from duping the public. Consumer programmes — of which the first, and in many ways the best, was On the Braden Beat — were set up with this aim in mind, and when they nail a serious, out-and-out villain, they are doing a good job.

The trouble is that there are now so many consumer programmes, as these pro- vide relatively cheap and dramatic televi- sion, that they soon run out of genuine crooks and have to root around for ever smaller and more insignificant targets to villainise. And somehow they must make the story 'stand up', otherwise they haven't got a programme.

That's Life, with its now tired format of Esther putting her head on one side and getting her ever-grinning young male acolytes to describe some terrible injus- tice, has now been killed, long after a humane vet would have acted, but we still have Watchdog, The Cook Report, World in Action, Panorama and all kinds of one- offs, usually shown on Channel 4. In some cases, an independent company is set up just to make the one consumer pro- gramme.

The set-up is always the same. The first person to come on, usually, is the whinge- ing punter. He or she is always believed. Then experts are wheeled on to say how terrible it all is. These are health and safe- ty officials, doctors, do-gooders of one kind or another, all with their own unstated — vested interests.

At the top there is the villain, the firm which has sold the dodgy lawn-mower, lent money at 80 per cent interest or peddled a quack treatment. Then the presenter, always with the same dreadful sincerity, comes on to say that the Government should do something, pass a law, stop this practice. It's only when you have some inside knowledge of the particular issue that you realise that there may be another side. Perhaps the punter has run his lawn- mower over rocks, perhaps he begged the loan-shark for money. People may be greedy or stupid, or out for revenge. But this aspect is always conveniently skated over in the enthusiasm to bring yet anoth- er dodgy businessman to television justice. I can't claim to be entirely saintly in this regard. During the mid-1970s, I was con- sumer correspondent of the Sunday Peo- ple. I am too ashamed to tell you how often I just daren't make that final phone call, in case the whole story fell down after weeks, in some cases, of investiga- tion.

But I soon realised that few stories are entirely black and white. To give an exam- ple: one reader complained she was being horrendously harassed by the owner of a site where she had parked her caravan. She sounded completely plausible, and we went down to the site. We discovered our aggrieved reader's caravan was a disgrace, filthy, with rotting food and rubbish all round it. Nobody would want it on their site.

So who was to be our 'monster without pity' that week? In the end the editor, unable to decide, did not run the story. But that is not so easy a decision for tele- vision programme makers, especially when they have already used yards of film, a camera team and a couple of reporters. However unwarranted and unreasonable the intrusion, if you can use hidden cam- eras and film some normally secret or con- fidential interchange — as between doctor and patient — you're home and thy. It's `good television'.

And it is only in very rare cases that peo- ple will sue. Upjohn have never sued any- body before, said their spokesman. The advantage of targeting small enough firms is that they won't have the resources nec- essary.

John Stonborough was an award-win- ning reporter on a now defunct consumer television programme, 4 What it's Worth. Initially, he found it great fun nailing vil- lains, but soon realised that much essential information had to be left out if there was to be enough outrage generated.

He now runs an agency acting for those on the receiving end of journalistic con- sumer investigation. Item: 'A large build- ing firm came to us as a film had been made about a child who crawled on to one of their sites and was crushed.

`It sounded terrible, indeed, and there was footage of the mother crying. But when we investigated, we discovered that the firm had subcontracted, but not only that, the child was deaf and at eight o'clock in the evening was on her own two miles from home. `Nobody asked the parents whether they felt some culpability in all this, and none of these points were mentioned. In this case, we managed to get the programme stopped, but only because the company contacted us. Trial by television means you have no right of reply, and may be sum- marily convicted without all the evidence being presented.'

A World in Action programme shown in November 1992 described how many women with breast implants were suffering from auto-immune diseases. The clear implication was that implant manufactur- ers were at fault for producing unsafe goods. Nobody mentioned that all these women on the programme were cancer patients who had had breast reconstruc- tion following mastectomy — so they were hardly well people in the first place.

The programme, though, caused mass hysteria, and all but brought an end to the operation in this country.

`In truth, the issues at stake are rarely clear-cut,' argues John Stonborough. The "villains" are often not breaking any law or doing anything wrong. But issue televi- sion isn't interesting. You have to nail a crook, somehow, and use hidden cameras to make it required viewing. The J'Accuse format is followed relentlessly.

`People always believe television in a way they don't believe ndwspapers. But the structure of such programmes makes it essential to beard somebody.' Stonborough believes that at the heart of these ever-pro- liferating programmes is a deep British sus- picion of the commercial world, of anybody making money. 'But the television world is just as commercial. Presenters and editors of these programmes are probably making far more than most of the crooks and vil- lains they target.'

Occasionally, the deadly serious business of these programme presenters causes unintentional hilarity. On one recent Watchdog programme, a studio audience complained bitterly about how they had been terribly burned by Kellogg's jam-filled pop tarts. The tarts and toasters were methodically checked in a laboratory, and the presenters wondered why Kellogg's had not offered proper compensation to vic- tims.

But not once did anybody suggest to the brutishly stupid audience that they might have waited for the tarts to cool, or that hot jam is seriously hot.

Kellogg's are big enough to take it. But perhaps we ought to ask what purpose is served when an individual's life is ruined in television's incessant search for wicked monsters and evil-doers. Only a few busi- nessmen are out-and-out fiends, but for the purposes of television they must all be made to appear so.