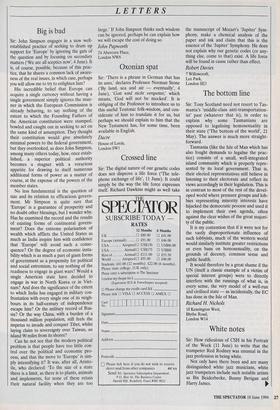 Sir: John Simpson engages in a now well- established practice of seeking to drum up support for 'Europe' by ignoring the guts of the question and by focusing on secondary matters (We are all sceptics now', 4 June). It is, of course, possible, because of this prac- tice, that he shares a common lack of aware- ness of the real issues, in which case, perhaps you will allow me to try to enlighten him?

His incredible belief that Europe can acquire a single currency without having a single government simply ignores the man- ner in which the European Commission is already behaving, to say nothing of the extent to which the Founding Fathers of the American constitution were stumped, bowled and caught out in seeking to act on the same kind of assumption. They thought their constitution would give absolutely minimal powers to the federal government, but they overlooked, as does John Simpson, among many others today, how, once estab- lished, a superior political authority becomes a magnet with a voracious appetite for drawing to itself numerous additional forms of power as a matter of course, at the expense of the powers of the member states.

No less fundamental is the question of size and its relation to efficacious govern- ment. Mr Simpson is quite sure that 'Europe' is a guarantee of prosperity and no doubt other blessings, but I wonder why. Has he examined the record and the results of existing forms of continental govern- ment? Does the extreme polarisation of wealth which afflicts the United States as much as India inspire him with confidence that 'Europe' will avoid such a conse- quence? Or the degree of economic insta- bility which is as much a part of giant forms of government as a propensity for political and social extremism, to say nothing of the readiness to engage in giant wars? Would a single American state have decided to engage in war in North Korea or in Viet- nam? And does the significance of the extent to which India has engaged in military con- frontation with every single one of its neigh- bours in its half-century of independence escape him? Or the military record of Rus- sia? Or the way China, with a burden of a thousand million population, still feels the impetus to invade and conquer Tibet, whilst laying claim to sovereignty over Taiwan, an island 90 miles from its shores?

Can he not see that the modern political problem is that people have too little con- trol over the political and economic pro- cess, and that the move to 'Europe' is sim- ply intensifying it? It was, after all, Aristo- tle, who declared: `To the size of a state there is a limit, as there is to plants, animals and implements, for none of these retain their natural facility when they are too large.' If John Simpson thinks such wisdom can be ignored, perhaps he can explain how we will escape the cost of doing so.