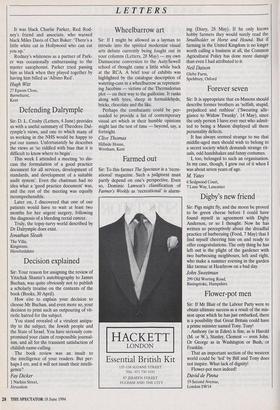 Sir: If Mr Blair of the Labour Party were to obtain ultimate success as a result of the mis- sion upon which he has just embarked, there is a possibility that Great Britain could have a prime minister named Tony. Tony!

Anthony (as in Eden) is fine, as is Harold (M. or W.), Stanley, Clement — even John. Or George as in Washington or Bush, or Franklin.

That an important section of the western world could be 'led' by Bill and Tony does not inspire. What lack of dignity!