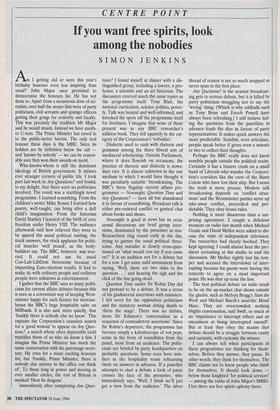 If you want free spirits, look among the nobodies

Who-knows-whom is still the dominant ideology of British government. It infuses ever stranger corners of public life. I took part last week in Any Questions? and found, to my delight, that there were no politicians involved. The result was a startlingly novel programme. I learned something. From the children's writer Mike Rosen I learned how poetry, well-taught, can bring alive a dull child's imagination. From the historian David Starkey I learned of the birth of civic freedom under Henry VIII. The audience afterwards said how relieved they were to be spared the usual political ranting, the stock answers, the stock applause for politi- cal muscles 'well posed', as the body- builders say. The BBC, however, was wor- ried. It could not use its usual Con-Lab-LibDem threesome because of impending Euro-election results. It had to make do with ordinary people and ordinary people were unknown as entertainment.

I gather that the BBC uses so many politi- cians for current affairs debates because this is seen as a convenient way of keeping West- minster happy for each licence fee increase: hence the BBC's huge hospitality suite on Millbank. It is also said, more quietly, that `frankly there is nobody else we know'. This explains the Corporation's ceaseless search for a 'good woman' to appear on Any Ques- tions?, a search whose often deplorable yield mystifies those of us who do know a few. I imagine the Prime Minister has much the same conversation with his patronage secre- tary. He cries for a more exciting honours list, but `frankly, Prime Minister, there is nobody else anyone in the office can think of . To those long in power and moving in ever smaller circles, the rest of Britain is marked 'Here be dragons'.

Immediately after completing Any Ques- tions? I found myself at dinner with a dis- tinguished group, including a lawyer, a pro- fessor, a scientist and an art historian. The discussion covered much the same topics as the programme itself: Tony Blair, the national curriculum, science politics, pover- ty. Talk was heated and well-informed, and knocked the spots off the programme itself for liveliness. I imagine that none of those present was in any BBC researcher's address book. They fell squarely in the cat- egory of the Corporation's 'nobodies'.

Dialectic used to rank with rhetoric and grammar among the three liberal arts of mediaeval scholarship. Outside Parliament, where it does flourish on occasions, the practice of rhetoric and dialectic is nowa- days rare. It is almost unknown in the one medium to which I would have thought it was peculiarly suitable: broadcasting. The BBC's three flagship current affairs pro- grammes — Newsnight, Question Time and Any Questions? — have all but abandoned it in favour of soundbiting. Broadcast talk is either pre-ordered conflict or genteel chat about books and shows.

Newsnight is good at news but its occa- sional discussions are brief group inter- views, dominated by the presenter as star. Researchers ring round early in the day, trying to garner the usual political three- some. Any outsider is closely cross-ques- tioned on 'what would you say if you came on?' It is an audition not for a debate but for a row. I get some mild amusement from saying, 'Well, there are two sides to the question . . .' and hearing the sigh and the click of the line going dead.

Question Time under Sir Robin Day did not pretend to be a debate. It was a rerun of his gladiatorial interviews with ministers. I felt sorry for the opposition politicians and the statutory woman sitting dumb to `dress the stage'. There was no debate, more Dr Johnson's 'conversation as a sequence of contradictory assertions'. Since Sir Robin's departure, the programme has become simply a kaleidoscope of vox pops, some in the form of soundbites from the panel, most from an audience. The politi- cians are briefed by party headquarters on probable questions. Some even have min- ders in the hospitality room rehearsing them on answers in advance. If a panellist attempts to start a debate a look of panic crosses the face of the presenter, who immediately says, 'Well, I think we'll just get a view from the audience.' The silver thread of reason is not so much snapped as never spun in the first place.

Any Questions? is the nearest broadcast- ing gets to serious debate, but it is killed by party politicians struggling not to say the `wrong' thing. (Which is why oddballs such as Tony Benn and Enoch Powell have always been refreshing.) I still believe hid- ing the questions from the panellists in advance loads the dice in favour of party representatives. It makes quick answers the more predictable. Sensible, even articulate, people speak better if given even a minute or two to collect their thoughts.

Perhaps the BBC really does not know sensible people outside the political realm. Certainly it has a bizarre crush on a small band of Liberals who wander the Corpora- tion's corridors like the crew of the Marie Celeste who have lost their ship. But I sense the truth is more prosaic. Modern talk broadcasting depends on 'conflict situa- tions' and the Westminster parties serve up take-away conflict, precooked and pre- dictable. They obey house rules.

Nothing is more disastrous than a sur- prising agreement. I caught a delicious moment on radio last month when Michael Grade and David Mellor were asked to dis- cuss the state of independent television. The researcher had clearly boobed. They kept agreeing. I could almost hear the pro- ducer screaming at the studio to end the discussion. Mr Mellor rightly lost his tem- per and accused the interviewer of inter- rupting because his guests were having the temerity to agree on a most important point. He was shut up none the less.

The best political debate on radio tends to be on the up-market chat shows outside the ghetto, such as Melvyn Bragg's Start the Week and Michael Buerk's anarchic Moral Maze. They are overcrowded: nothing blights conversation, said Swift, so much as an 'impatience to interrupt others and an uneasiness at being interrupted oneself. But at least they obey the maxim that debate should be a struggle between vanity and curiosity, with curiosity the winner.

I can always tell when participants in these programmes are thinking for them- selves. Before they answer, they pause. In other words, they think for themselves. The BBC claims not to know people who think for themselves. It should look down below those knighted 'for political services' — among the ranks of John Major's MBEs. I bet there are free spirits aplenty there.