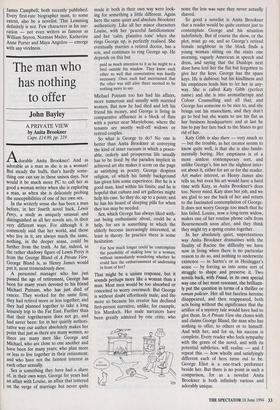 The man who has nothing to offer

A PRIVATE VIEW by Anita Brookner Cape, £14.99, pp. 219 Adorable Anita Brookner! And as adorable as a man as she is as a woman! But steady the buffs, that's hardly some- thing one can say in these unisex days. Nor would it be much more PC to call her as good a woman writer when she is exploring a man, as when she is delicately probing the susceptibilities of one of her own sex.

In the writerly sense she has been a man before, in her fourth novel back, Lewis Percy, a study as uniquely unusual and distinguished as all her novels are, in their very different ways. For although it is commonly said that her world, and those who live in it, are always much the same, nothing, in the deeper sense, could be further from the truth. As far, indeed, as the rather shadowy figure of Lewis Percy is from the George Bland of A Private View. George Bland is, as Henry James would put it, most tremendously there.

A personnel manager who has just passed the age of retirement, George has been for many years devoted to his friend Michael Putnam, who has just died of cancer. They worked for the same firm; they had retired more or less together; and they had planned together to take a long leisurely trip to the Far East. Further than that their togetherness does not go, and had never been: for in her quietly authori- tative way our author absolutely makes her point that just as there are many women, so there are many men like George and Michael, who are close to one another and have been for many years; who plan more or less to live together in their retirement; and who have not the faintest interest in each other sexually. Sex is something they have had a share of, in their own ways. George for years had an affair with Louise, an affair that tottered on the verge of marriage but never quite made it: both in their own way were look- ing for something a little different. Again here the same quiet and absolute Brookner authenticity. Like all her minor characters Louise, with her 'peaceful fastidiousness' and her 'calm, plaintive tone' when she rings George up, is perfectly realised. She eventually marries a retired doctor, has a son, and continues to ring George up. He depends on this but

paid as much attention to it as he might to a bird outside his window. They knew each other so well that conversation was hardly necessary. Once each had ascertained that the other was still alive there seemed to be nothing more to say.

Michael Putnam too has had his affairs, more numerous and usually with married women. But now he had died and left his friend his money, and George is living in comparative affluence in a block of flats with a porter near Marylebone, where the tenants are mostly well-off widows or retired couples.

So what is George to do? No one is better than Anita Brookner at conveying the kind of inner vacuum in which a peace- able, orderly and prosperous life usually has to be lived: by the paradox implicit in achieved art she makes it seem on the page as satisfying as poetry. George despises religion, of which his family background has given him some experience. But he is a good man, kind within his limits; and he is hopeful that culture and art galleries might help his case. So they do, up to a point; and he has his hoard of sleeping pills for when they too may be needed. Sex, which George has always liked with- out being enthusiastic about, could be a help, for sex is something in which the elderly become increasingly interested, at least in theory. In practice there is some hesitation:

For how much longer could he contemplate the possibility of making love to a woman, without immediately wondering whether he could face the embarrassment of undressing in front of her?

That might be a unisex response, but it sounds perhaps more like a woman than a man. Most men would be too absorbed or conceited to worry overmuch. But George is without doubt effortlessly male; and the more so because his creator has declined first-person narrative, unlike, for example, Iris Murdoch. Her male narrators have been greatly admired by one critic, who none the less was sure they never actually shaved.

So good a novelist is Anita Brookner that a reader would be quite content just to contemplate George and his situation indefinitely. But of course the show, or the plot, must go on; and so George's retired female neighbour in the block fmds a young woman sitting on the stairs one morning, vaguely American in speech and dress, and saying that the Dunlops next door have lent her the flat but forgotten to give her the keys. George has the spare keys. He is dubious; but his kindliness and his emptiness leads him to let her in any- way. She is called Katy Gibb (perfect name) and she is into aromatherapy and Colour Counselling and all that; and George has someone to be nice to, and she brings out his masochism, and they don't go to bed but she wants to use his flat as her business headquarters: and at last he has to pay her fare back to the States to get rid of her.

Katy Gibb is also there — very much so — but the trouble, as her creator seems to know quite well, is that she is also funda- mentally boring. Her emptiness is of a more aimless contemporary sort, and unlike George's, has not the slightest inter- est about it, either for art or for the reader. Art makes interest, as Henry James also tells us; but even his art would have a hard time with Katy, as Anita Brookner's does too. Never mind. Katy does her job, and we are glad to see the back of her and return to the fascinated contemplation of George. It does not worry George too much that he has failed. Louise, now a long-term widow, makes one of her routine phone calls from Bournemouth soon after, and they think they might try a spring cruise together.

In her absolutely quiet, unpretentious way Anita Brookner dramatises with the finality of Racine the difficulty we have now in living when there is no particular reason to do so, and nothing to underwrite existence — in Sartre's or in Heidegger's sense — by forcing us into some sort of struggle to shape and preserve it. Two novels back, with Fraud, in its own special way one of her most resonant, she brilliant- ly put the question in terms of a thriller or roman policier. Her all but faceless heroine disappeared, and then reappeared, both acts being without the significance that the artifice of a mystery tale would have had to give them. In A Private View she closes with and claims George Bland, the man who has nothing to offer, to others or to himself. And with her, and for us, his success is complete. Every reader who feels sympathy with the genre of the novel, and with its potential subtleties, will realise — and I repeat this — how wholly and satisfyingly different each of hers turns out to be. George Eliot is a one-track performer beside her. But there is no point in such a comparison, for as a novelist Anita Brookner is both infinitely various and adorably unique.