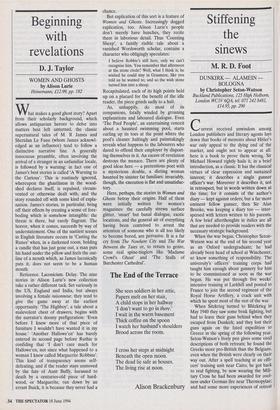 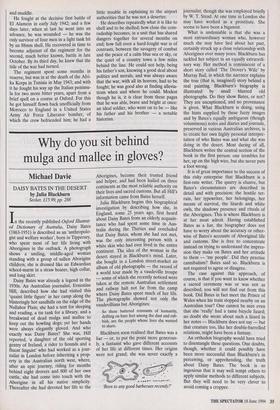 M. R. D. Foot DUNKIRK — ALAMEIN - BOLOGNA by Christopher Seton-Watson Buckland Publications, 125 High Holborn, London WC1V 6QA, tel: 071 242 8481, £14.95, pp. 290 urrent received unwisdom among London publishers and literary agents lays down that books of memoirs about Hitler's war only appeal to the dying end of the market, and ought not to appear at all: here is a book to prove them wrong. Sir Michael Howard rightly hails it, in a brief introduction, as a classic. It has the classical virtues of clear expression and sustained interest; it describes a single gunner officer's war. Moreover it describes it, not in retrospect, but in words written down at the time; for it consists of the author's diary — kept against orders; but a far more eminent fellow gunner, then Sir Alan Brooke, was keeping a diary too — inter- spersed with letters written to his parents. A few brief afterthoughts in italics are all that are needed to provide readers with the necessary strategic background.

When the war began, Christopher Seton- Watson was at the end of his second year as an Oxford undergraduate; he had already been head of school at Winchester, so knew something of responsibility. The university's officers' training corps had taught him enough about gunnery for him to be commissioned as soon as the war began. He was put through five weeks' intensive training at Larkhill and posted to France to join the second regiment of the Royal Horse Artillery, a crack unit with which he spent most of the rest of the war.

When Sitzkrieg turned to Blitzkrieg in May 1940 they saw some brisk fighting, but had to leave their guns behind when they escaped from Dunkirk; and they lost their guns again on the fated expedition to Greece in the spring of the following year. Seton-Watson's lively pen gives some vivid descriptions of both retreats; he found the Greeks more pro-British than the Belgians, even when the British were clearly on their way out. After a spell teaching at an offi- cers' training unit near Cairo, he got back to real fighting, by now wearing the Mili- tary Cross he had been awarded for cool- ness under German fire near Thermopylae; and had some more experiences of retreat and muddle.

He fought at the decisive first battle of El Alamein in early July 1942; and a few days later, when at last he went into an advance, he was wounded — he was the only survivor of four men in a light tank hit by an 88mm shell. He recovered in time to become adjutant of the regiment for the second, much better known, battle in late October. By its third day, he knew that the tide of the war had turned.

The regiment spent some months in reserve, but was in at the death of the Afri- ka Korps in Tunisia in May 1943; and with it he fought his way up the Italian peninsu- la for two more bitter years, apart from a brief spell on a course at Oxford. For this he got himself flown back unofficially from Morocco to England in a United States Army Air Force Liberator bomber, of which the crew befriended him; he had a little trouble in explaining to the airport authorities that he was not a deserter.

He describes repeatedly what it is like to shell and to be shelled; how close the com- radeship becomes, in a unit that has shared dangers together for several months on end; how full even a hard-fought war is of contrasts, between the savagery of combat and the peace of a calm blue sea or sky, or the quiet of a country town a few miles behind the line. He could not help, being his father's son, knowing a good deal about politics and morals, and was always aware that the war, with all its horrors, had to be fought; he was good also at finding allevia- tions when and where he could. Modest though he is, it is clear from these pages that he was able, brave and bright at once: an ideal soldier, who went on to be — like his father and his brother — a notable historian.