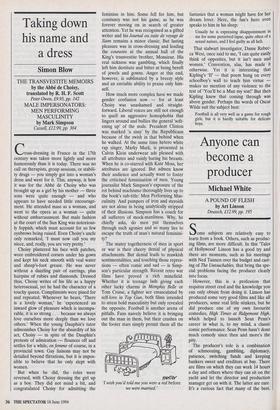 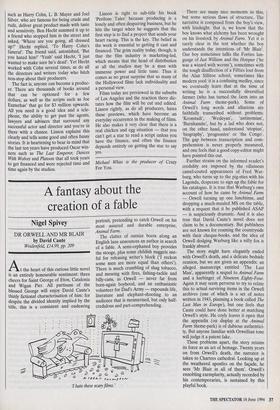 Anyone can become a producer

A POUND OF FLESH by Art Linson Deutsch, f12.99, pp. 195 Some subjects are relatively easy to learn from a book. Others, such as produc- ing films, are more difficult. In this Tales of Hollywood' Linson has a good try and there are moments, such as his meetings with Ned Tannen over the budget and cast- ing of The Untouchables, that bring the spe- cial problems facing the producer clearly into focus.

However, this is a profession that requires street cred and the knowledge you can only obtain from doing it. Linson has produced some very good films and like all producers, some real little stinkers, but he did produce one of my own favourite comedies, High Times at Ridgemont High, which helped to launch Sean Penn's career in what is, to my mind, a classic comic performance. Sean Penn hasn't done much comedy since then and more's the pity.

The producer's role is a combination of schmoozing, gambling, diplomacy, patience, switching funds and keeping bankers sweet and creditors at bay. There are films on which they can work 14 hours a day and others where they can sit on the yacht and let the director and production manager get on with it. The latter are rare. It's a curious fact that many of the best, such as Harry Cohn, L. B. Mayer and Joel Silver, who are famous for being crude and rude, deliver great product made with taste and sensitivity. Ben Hecht summed it up to a friend who stopped him in the street and asked, 'Where are you going, all dressed up?' Hecht replied, 'To Harry Cohn's funeral'. The friend said, astonished, 'But you hated him!' Yeah' said Hecht, 'I just wanted to make sure he's dead'. Yet Hecht worked with Cohn several times, as do all the directors and writers today who bitch non-stop about their producers. The fact is, anyone can become a produc- er. There are thousands of books around that can be optioned for a few dollars, as well as the scripts such as Joe Eszterhas' that go for $3 million upwards. All you need is a good idea and a tele- phone, the ability to get past the agents, lawyers and advisers that surround any successful actor and director and you're in there with a chance. Linson explains this clearly and tells some good and often funny stories. It is heartening to bear in mind that the last ten years have produced Oscar win- ners such as The Last Emperor, Dances With Wolves and Platoon that all took years to get financed and were rejected time and time again by the studios. Linson is right to sub-title his book `Perilous Tales' because producing is a lonely and often despairing business, but he hits the target when he suggests that the first step is to find a project that sends your heart racing. This is the key. The belief in the work is essential to getting it cast and financed. The grim reality today, though, is that the film industry is marketing-led, which means that the head of distribution at all the studios may be a man with immense power and little taste. Thus it comes as no great surprise that so many of the Hollywood films lack individuality and a personal view. Films today are previewed in the suburbs of Los Angeles and the reaction there dic- tates how the film will be cut and edited. Linson rightly, as do all producers, hates these previews, which have become an everyday occurrence in the making of films. He also makes it very clear that there is a real chicken and egg situation — that you can't get a star to read a script unless you have the finance, and often the finance depends entirely on getting the star to say yes.

Michael White is the producer of Crazy For You.