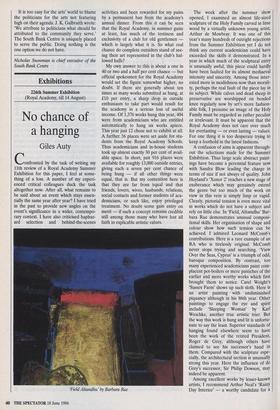 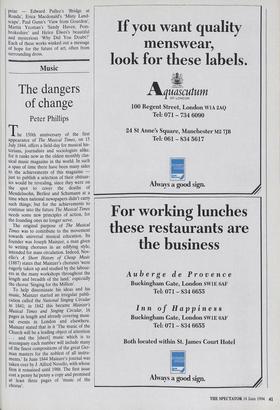 Na chance of a hanging

Confronted by the task of writing my 11th review of a Royal Academy Summer Exhibition for this paper, I feel at some- thing of a loss. A number of my experi- enced critical colleagues duck the task altogether now. After all, what remains to be said about an event which stays essen- tially the same year after year? I have tried in the past to provide new angles on the event's significance in a wider, contempo- rary context. I have also criticised haphaz- ard selection and behind-the-scenes activities and been rewarded for my pains by a permanent ban from the academy's annual dinner. From this it can be seen that the Royal Academy, in summer guise at least, has much of the testiness and exclusivity of a club for old gentlemen which is largely what it is. So what real chance do complete outsiders stand of see- ing their art represented in the club's hal- lowed halls?

My own answer to this is about a one in 40 or two and a half per cent chance — but official spokesmen for the Royal Academy would set the figure somewhat higher, no doubt. If there are generally about ten times as many works submitted as hung, at £10 per entry, a sharp drop in outside enthusiasm to take part would result for the academy in a serious loss of useful income. Of 1,376 works hung this year, 404 were from academicians who are entitled automatically to hang six works apiece. This year just 12 chose not to exhibit at all. A further 56 places were set aside for stu- dents from the Royal Academy Schools. Thus academicians and in-house students took up almost exactly 30 per cent of avail- able space. In short, just 916 places were available for roughly 13,000 outside entries, giving each a seven per cent chance of being hung — if all other things were equal, that is. But my contention here is that they are far from tqual and that friends, lovers, wives, husbands, relations, social contacts and former students of aca- demicians, or such like, enjoy privileged treatment. No doubt some gain entry on merit — if such a concept remains credible still among those many who have lost all faith in explicable artistic values.

The week after the summer show opened, I examined an almost life-sized sculpture of the Holy Family carved in lime wood by a virtually unknown young artist, Arthur de Mowbray. It was one of this year's many hundreds of outright rejections from the Summer Exhibition yet I do not think any current academician could have exceeded the skills it demonstrated. In a year in which much of the sculptural entry is unusually awful, this piece could hardly have been faulted for its almost mediaeval intensity and sincerity. Among those inter- ested more in modishness now than morali- ty, perhaps the real fault of the piece lay in its subject. While calves and dead sheep in preservative are worshipped on bended knee regularly now by art's more fashion- able folk, I presume an image of the Holy Family must be regarded as rather peculiar or irrelevant. It must be apparent that the Royal Academy does not care over much for everlasting — or even lasting — values. For one thing it is too desperate trying to keep a foothold in the latest fashions.

A confusion of aims is apparent through- out the selections made for the Summer Exhibition. Thus large scale abstract paint- ings have become a perennial feature now with Sandra Blow leading the charge in terms of size if not always of quality. John Hoyland's `Xonor 2' reaches a new stage of exuberance which may genuinely extend the genre but too much of the work on view in this vein is simply limp or vapid. Clearly, pictorial tension is even more vital in works which do not have a subject and rely on little else. In 'Field, Altamdhu' Bar- bara Rae demonstrates unusual composi- tional skills. Her organisation of shape and colour show how such tension can be achieved. I admired Leonard McComb's contributions. Here is a rare example of an RA who is tirelessly original. McComb never stops trying and searching. `View Over the Seas, Cyprus' is a triumph of odd, baroque composition. By contrast, too many experienced academicians paint com- placent pot-boilers or mere pastiches of the earlier and more worthy works which first brought them to notice. Carel Weight's `Sussex Farm' shows up such sloth. Here is an artist painting with undiminished piquancy although in his 86th year. Other paintings to engage the eye and spirit include 'Sleeping Woman' by Karl Weschke, another true artistic trier. But the way this work is hung and lit is unfortu- nate to say the least. Superior standards of hanging found elsewhere seem to have been the work of the retired President, Roger de Grey, although others have claimed to see his successor's hand in them. Compared with the sculpture espe- cially, the architectural section is unusually strong this year. Here the influence of de Grey's successor, Sir Philip Dowson, may indeed be apparent.

Among excellent works by lesser-known artists, I recommend Arthur Neal's 'Rainy Day Interior' — a worthy candidate for a prize — Edward Pullee's 'Bridge at Ronda', Erica Macdonald's 'Misty Land- scape', Paul Gunn's 'View from Gourdon', Martin Yeoman's 'Sandy Haven, Pem- brokeshire' and Helen Elwes's beautiful and mysterious 'Why Did You Doubt?' Each of these works winked out a message of hope for the future of art, often from surrounding dross.