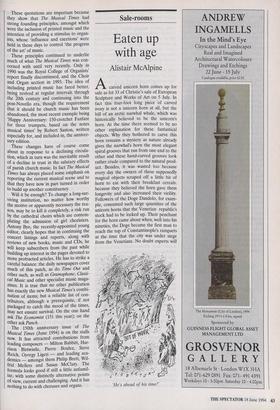 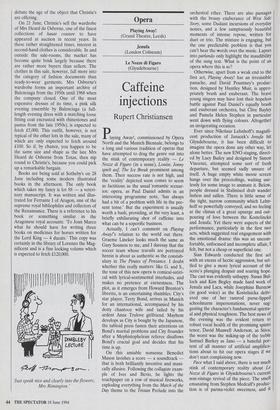 Eaten up with age

Acarved unicorn horn comes up for sale as lot 33 of Christie's sale of European Sculpture and Works of Art on 5 July. In fact this four-foot long piece of carved ivory is not a unicorn horn at all, but the bill of an arctic narwhal whale, which was historically believed to be the unicorn's horn. At the time there seemed to be no other explanation for these fantastical objects. Why they bothered to carve this horn remains a mystery as nature already gives the narwhal's horn the most elegant spiral grooves that run from one end to the other and these hand-carved grooves look rather crude compared to the natural prod- uct. Besides, it was wasted too because every day the owners of these supposedly magical objects scraped off a little bit of horn to eat with their breakfast cereals: because they believed the horn gave them longevity and also increased their virility. Followers of the Doge Dandolo, for exam- ple, consumed such large quantites of the unicorn horns that the Venetian republic's stock had to be locked up. Their penchant for the horn came about when, well into his nineties, the Doge became the first man to reach the top of Constantinople's ramparts at the time that the city was under siege from the Venetians. No doubt experts will

We's ahead of his time!' debate the age of the object that Christie's are offering.

On 21 June, Christie's sell the wardrobe of Mrs Heard de Osborne, one of the finest collections of haute couture to have appeared at auction in recent years. In these rather straightened times, interest in second-hand clothes is considerable. In and outside the sale-rooms, the market has become quite brisk largely because there are rather more buyers than sellers. The clothes in this sale, however, fall more into the category of fashion documents than ready-to-wear garments. Mrs Osborne's wardrobe forms an important archive of Balenciaga from the 1950s until 1968 when the company closed. One of the most expensive dresses of its time, a pink silk evening ensemble by Balenciaga (a full- length evening dress with a matching loose fitting coat encrusted with rhinestones and pastes from the late 1950s), is expected to fetch £5,000. This outfit, however, is not typical of the other lots in the sale, many of which are only expected to fetch around £100. So if, by chance, you happen to be the same size and shape as the late Mrs Heard de Osborne from Texas, then nip round to Christie's, because you could pick up a remarkable bargain.

Books are being sold at Sotheby's on 28 June including some modern illustrated books in the afternoon. The only book which takes my fancy is lot 88 — a veteri- nary manuscript. It was written and illus- trated for Ferrante I of Aragon, one of the supreme royal bibliophiles and collectors of the Renaissance. There is a reference to his book or something similar in the Aragonese royal accounts: 'To Joan Marco what he should have for writing three books on medicines for horses written for the Lord King — 4 ducats.' This copy was certainly in the library of Lorenzo the Mag- nificent and is a fine looking volume which is expected to fetch £120,000.

'Just speak nice and clearly into the flowers, Mrs Rimington.'