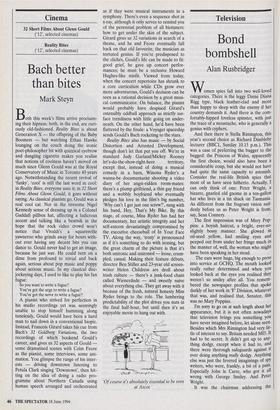 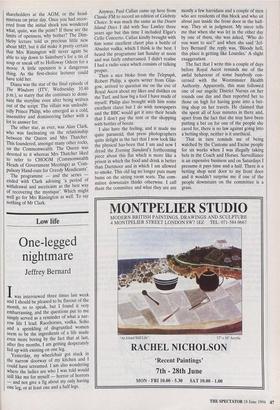 Women spies fall into two well-loved categories. There is the leggy Dame Diana Rigg type, black leather-clad and more than happy to sleep with the enemy if her country demands it. And there is the com- fortably-hipped loveless spinster, with just the trace of a moustache, who is generally a genius with cyphers.

And then there is Stella Rimington, this year's second choice as Richard Dimbleby lecturer (BBC1, Sunday 10.15 p.m.). This was a case of preferring the bugger to the bugged: the Princess of Wales, apparently the first choice, would also have been a considerable coup, but she would not have had quite the same capacity to astonish. Consider the real-life British spies that most of us have seen hitherto. Actually, I can only think of one: Peter Wright, a bizarre, gnarled old gnome in a ten-gallon hat who lives in a tin shack on Tasmania. As different from the fragrant vision sud- denly before us as Peter Wright is from, say, Sean Connery.

The first impression was of Mary Pop- pins: a boyish haircut, a bright, ever-so- slightly bossy manner. She glowed in oil-seed yellow, had smiling eyes and peeped out from under her fringe much in the manner of, well, the woman who might have been speaking in her stead.

The ears were huge, big enough to press into service at GCHQ. The mouth looked really rather determined and when you looked back at the eyes you realised they weren't so smiley after all. You remem- bered the newspaper profiles that spoke darkly of her work in 'F' Division, whatever that was, and realised that, Senator, this was no Mary Poppins.

I'm sony to go on at such length about her appearance, but it is not often nowadays that television brings you something you have never imagined before, let alone seen. Besides which Mrs Rimington had very lit- tle of interest to say. Britain needed MI5. It had to be secret. It didn't get up to any- thing dodgy, except when it had to, and there were thorough safeguards against it ever doing anything really dodgy. Anything else was just the fevered imaginings of spy writers, who were, frankly, a bit of a pain. Especially John le Cane, who got it all wrong with George Smiley. And Peter Wright. It was the chairman addressing the shareholders at the AGM, or the head- mistress on prize day. Once you had recov- ered from the initial shock you wondered what, quite, was the point? If these are the limits of openness, why bother? The Dim- bleby lecture told us precious little new about MI5, but it did make it pretty certain that Mrs Rimington will never again be able to nip down to Sainsbury's for a tin of soup or sneak off to Holloway Odeon for a movie. A little openness is a dangerous thing. As the first-choice lecturer could have told her.

Diana was the star of the final episode of The Windsors (ITV, Wednesday 10.40 P.m.), so starry that she continues to domi- nate the storyline even after being written out of the script. The villain was undoubt- edly Prince Philip, who emerged as a cold, Insensitive and domineering father with a lot to answer for.

The other star, as ever, was Alan Clark, who was fascinating on the relationship between the Queen and Mrs Thatcher. This foundered, amongst many other rocks, on the Commonwealth. The Queen was devoted to it whereas Mrs Thatcher liked to refer to CHOGM (Commonwealth Heads of Government Meetings) as `Com- pulsory Hand-outs for Greedy Mendicants'. The programme — and the series ended with Clark advising 'a period of withdrawal and asceticism as the best way of recovering the mystique'. Which might well go for Mrs Rimington as well. To say nothing of Mr Clark.