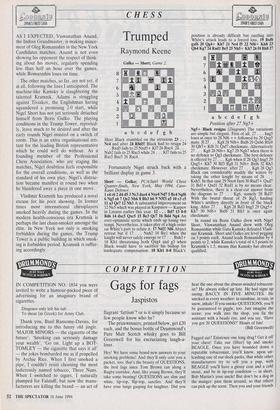 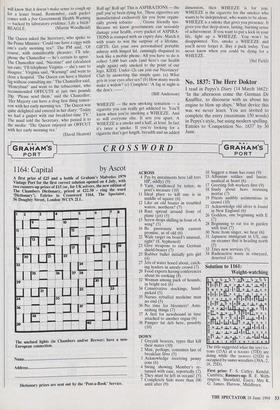 IN COMPETITION NO. 1834 you were invited to write a humour-packed piece of advertising for an imaginary brand of cigarettes.

Diogenes only left his tub To shout (in Greek) for Army Club.

Thank you, Basil Ransome-Davies, for introducing me to this funny old jingle. `MAJOR MINORS — the cigarette of the future'. 'Smoking can seriously damage your wealth', 'Go on. Light up a BOT- TOMLEY — the cigarette that says it all' — the jokes bombarded me as if propelled by Archie Rice. When I first smoked a pipe, I couldn't resist choosing the most ludicrously named tobacco, Three Nuns. When I switched to cigars, I naturally plumped for Falstaff; but now the manu- facturers are killing the brand — an act of flagrant lattism'? or is it simply because so few people know who he?

The prizewinners, printed below, get £20 each, and the bonus bottle of Drummond's Pure Malt Scotch whisky goes to Bill Greenwell for his excruciating laugh-a- liner.

Hey! We have some brand new answers to your smoking problems! And they'll only cost you a packet, too: that's the beauty of QUESTIONS, the best fags since Tom Brown ran along a Rugby corridor. And, like young Brown, they'll take some beating! QUESTIONS are slim and white, tip-top, flip-top, surefire. And they'll have your lungs gasping for laughter. Did you

hear the one about the absent-minded tobaccon- ist? He always rolled up late. He had signs up saying BACCY IN FIVE MINUTES. He smoked in every weather: in sunshine, in rain, in snow, inhale! If you smoke QUESTIONS, you'll be guaranteed to giggle, too. Just imagine the scene: you walk into the shop, you fix the assistant with a beady eye, and you say, 'Have you got 20 QUESTIONS?' Hours of fun!

(Bill Greenwell) Fagged out? Existence one long drag? Get it off your chest! Take our (filter) tip and smoke BEAGLE. Once you have hounded down a reputable tobacconist, you'll know, upon un- leashing one of our sleek packs, that while other manufacturers try to sell you a pup, with BEAGLE you'll have a glossy coat and a cold snout, and be in tip-top condition — in short, Bob Martin's your uncle! But don't be a dog in the manger: pass them around, so that others can pick up the scent. Then you and your friends

will know that it doesn't make sense to cough up for a lesser brand. Remember, each packet comes with a free Government Health Warning — backed by laboratory evidence. Life a bitch?

BEAGLE. (Martin Woodhead) The Queen asked the Secretary, who spoke to the Prime Minister: 'Could one have a ciggy with one's early morning tea?' The PM said, 'Of course, with considerable pleasure; I'll tele- phone the Chancellor — he's certain to agree.' The Chancellor said, 'Nicotine!' and calculated

tax-cuts; telephone Virginia — she's sure to disagree.' Virginia said, 'Warning!' and went to close a hospital. The Queen can have a blasted fag without consulting me.' The Chancellor said, 'Honeybun!' and went to the tobacconist, who recommended -OFFCUTS at just two pounds 20p, 'Please send them,' said the Chancellor; `Her Majesty can have a drag first thing tomor- row with her early morning tea.' The Queen was quite delighted and entered in her diary: 'Today we had a gasper with our breakfast-time TV.' The maid told the Secretary, who passed it to the media: 'The Queen enjoyed an OFFCUT with her early morning tea.'

(David Heaton) Roll up! Roll up! This is ASPIRATIONS — the puff you've been dying for. These cigarettes are manufactured exclusively for you from organi- cally grown tobacco . . . Ozone friendly too. Because we know governments can seriously damage your health, every packet of ASPIRA- TIONS is stamped with an expiry date. Match it with yours to win the surprise of a lifetime. GIFTS: Get your own personalised portable ashtray with hinged lid, cunningly disguised to look like a mobile phone. All you have to do is collect 5,600 butt ends (and here's our health angle again) only smoked to the point of our logo. KIDS: Under-12s can join our Nicotineys' Club by answering this simple quiz: (a) What gets in your eyes after sex? (b) How many weeds make a widow? (c) Complete: 'A fag at night is the don's (Bill Anderson) WHEEZE — the new smoking sensation — a cigarette you can really get addicted to. You'll know when you're smoking a WHEEZE. And so will everyone else. It sets you apart. A WHEEZE is a smoke and a half, at least. In fact it's twice a smoke. If you're looking for a cigarette that's got length, breadth and an added dimension, then WHEEZE is for you. WHEEZE is the cigarette for the smoker who wants to be independent, who wants to be alone. WHEEZE is a smoke that gives you presence. It gives you that deep-down, lasting, burning sense of achievement. If you want to put a kick in your life, light up a WHEEZE. You won't be disappointed. Yes, smoke a WHEEZE and you'll never forget it. Buy a pack today. You never know when you could be dying for a WHEEZE.