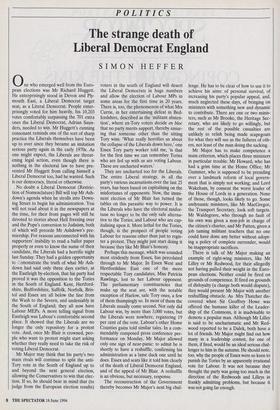 One who emerged well from the Euro- pean elections was Mr Richard Huggett. He enterprisingly stood in Devon and Ply- mouth East, a Liberal Democrat target seat, as a Literal Democrat. People enter- prisingly voted for him heavily, his 10,203 votes comfortably surpassing the 701 extra ones the Liberal Democrat, Adrian Saun- ders, needed to win. Mr Huggett's cunning consonant reminds one of the sort of sharp practice the Liberals themselves have been up to ever since they became an imitation serious party again in the early 1970s. As one might expect, the Liberals are threat- ening legal action, even though there is nothing in the electoral law to have pre- vented Mr Huggett from calling himself a Liberal Democrat too, had he wanted. Such is our democracy, literal or otherwise.

No doubt a Liberal Democrat (Restric- tion of Nomenclature) Bill will top Mr Ash- down's agenda when he strolls into Down- ing Street to begin his administration. You will not read about it in the newspapers at the time, for their front pages will still be devoted to stories about Hell freezing over and the Pope's conversion to Judaism, both of which will precede Mr Ashdown's pre- miership. For reasons unconnected with his supporters' inability to read a ballot paper properly or even to know the name of their candidate, the Liberals had a horrific night last Sunday. They had a golden opportunity to .'emonstrate the truth of what Mr Ash- down had said only three days earlier, at the Eastleigh by-election, that his party had proved it was the opposition to the Tories in the South of England. Kent, Hertford- shire, Bedfordshire, Suffolk, Norfolk, Bris- tol and Essex are all below the line from the Wash to the Severn, and undeniably in the South of England; they all now have Labour MEPs. A more telling signal from Eastleigh was Labour's comfortable second place. It showed that the Liberals are no longer the only repository for a protest vote. And, once Mr Blair is crowned, peo- ple who want to protest might start asking whether they really need to take the risk of voting Liberal Democrat.

Mr Major may think that his party's two main rivals will continue to split the anti- Tory vote in the South of England up to and beyond the next general election, allowing the Conservatives to win that elec- tion. If so, he should bear in mind that (to judge from the European election results) voters in the south of England will desert the Liberal Democrats in huge numbers and allow the election of Labour MPs in some areas for the first time in 20 years. There is, too, the phenomenon of what Mrs Currie, in her entertaining defeat in Bed- fordshire, described as the 'militant absten- tion', where ex-Tory voters decide en bloc that no party merits support, thereby ensur- ing that someone other than the sitting Tory wins. 'What really horrifies us about the collapse of the Liberals down here,' one Essex Tory party worker told me, 'is that for the first time we can remember Tories who are fed up with us are voting Labour. These are uncharted waters.'

They are uncharted too for the Liberals. The entire Liberal strategy, in all the party's various incarnations.over the last 25 years, has been based on capitalising on the misfortunes of opponents. Now, the immi- nent election of Mr Blair has turned the tables on this parasitic way to power. It is the Liberals who have the electoral misfor- tune no longer to be the only safe alterna- tive to the Tories, and Labour who are cap- italising upon it. More lethal for the Tories, though, is the prospect of people voting Labour for reasons other than just to regis- ter a protest. They might just start doing it because they like Mr Blair's honesty.

Perhaps this message, which was sounded most stridently from Essex, has percolated through to Mr Major. In Essex West and Hertfordshire East one of the more respectable Tory candidates, Miss Patricia Rawlings, lost to her Labour opponent. The parliamentary constituencies that make up the seat are, with the notable exception of Harlow, safe Tory ones, a few of them thumpingly so. In most of them the Liberals usually come second. Not only did Labour win, by more than 3,000 votes, but the Liberals were nowhere, registering 19 per cent of the vote. Labour's other Home Counties gains told similar tales. In a com- mendably composed press conference per- formance on Monday, Mr Major allowed only one sign of near-panic: to admit he is shortly to have a reshuffle, confirming his administration as a lame duck one until he does. Essex and seats like it told him clearly of the death of Liberal Democrat England, and of the appeal of Mr Blair. A reshuffle is an obvious, but necessary, response.

The reconstruction of the Government thereby becomes Mr Major's next big chal- lenge. He has to be clear of how to use it to achieve his aims: of personal survival, of increasing his party's popular appeal, and, much neglected these days, of bringing on ministers with something new and dynamic to contribute. There are one or two minis- ters, such as Mr Brooke, the Heritage Sec- retary, who are likely to go willingly, but the rest of the possible casualties are unlikely to relish being made scapegoats for what they will see as the failures of oth- ers, not least of the man doing the sacking.

Mr Major has to make competence a main criterion, which places three ministers in particular trouble: Mr Howard, who has had a grim time at the Home Office; Mr Gummer, who is supposed to be presiding over a landmark reform of local govern- ment that is simply not working; and Lord Wakeham, by consent the worst leader of the House of Lords in a generation. None of those, though, looks likely to go. Some undynamic ministers, like Mr MacGregor, the Transport Secretary, look soft targets. Mr Waldegrave, who through no fault of his own was given a non-job in charge of the citizen's charter, and Mr Patten, given a job taming militant teachers that no one could have done any better without adopt- ing a policy of complete surrender, would be inappropriate sacrifices.

There is talk of Mr Major making an example of right-wing ministers, like Mr Lilley or Mr Redwood, for their allegedly not having pulled their weight in the Euro- pean elections. Neither could be fired on grounds of competence. If fired on grounds of disloyalty (a charge both would dispute), they would present Mr Major with another reshuffling obstacle. As Mrs Thatcher dis- covered when Sir Geoffrey Howe was offered the humane killer of the Leader- ship of the Commons, it is inadvisable to demote a popular man. Although Mr Lilley is said to be uncharismatic and Mr Red- wood reported to be a Dalek, both have a lot of friends. Mr Major might find out how many in a leadership contest, for one of them, if fired, would be an ideal serious chal- lenger to him in the autumn. He should note, too, why the people of Essex were so keen to punish the Tories by an apparently irrational vote for Labour. It was not because they thought the party was going too much in the direction of the Redwoods and Lilleys in frankly admitting problems, but because it was not going far enough.