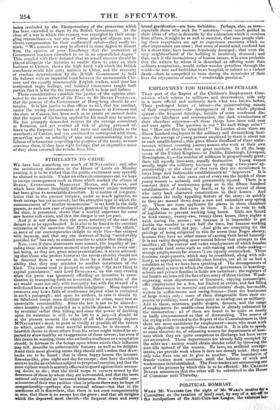 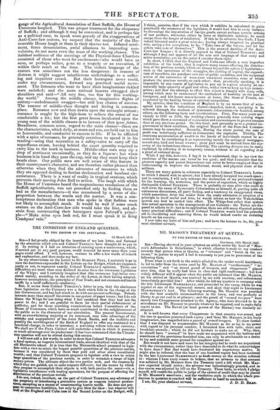 WHEN MT. VILLIERS OR the night -of Mr. WARD'S mobs' u.4r Committee on the taxation of land) read, by way of nft te . the inculpations of the Anti-Corn-law League, the valeratai‘a-

guage of the Agricultural Association of East Suffolk, the House of Commons laughed. This was proper treatment for the eloquence of Suffolk; and although it may be convenient, and is perhaps fair as a political ruse, to speak more gravely of the exaggerations of Anti-Corn-law orators, we suspect that the majority of the Ho- nourable House laugh at them in their sleeves too. Inflated senti- ment, fierce denunciation, awful allusions to impending con- vulsions, do not move even the mass of the working classes. The habitual audience of the meetings of the Physical-force Chartists consisted of those who went for excitement—who would have as soon, or perhaps rather, gone to a tragedy or an execution, if within their reach at the time. The violent language of the orators was sometimes not the less dangerous : in seasons of distress it might suggest mischievous undertakings to a suffer- ing and impatient crowd. But their harangues never could, under any circumstances, forward any practical useful move- ment. The listeners who went to have their imaginations tickled were satisfied; and the more rational hearers shrugged their shoulders and said—" All very fine, too fine for thisworking- day world." Among the middle classes, imaginative flights of oratory—melodramatic swagger—has still less chance of success. The essence of middle-class thought and feeling is common- place. Romance now and then dawns upon the untaught artisan ; romance is sought by the high-born to relieve the ennui of too comfortable a lot ; but the first great lesson inculcated upon the young man of the middle classes is to beware of that ignis jealous. Steadiness, common sense, regard to the main chance—these are the characteristics, which daily, at morn and eve, are held out to him as honourable, and conducive to success in life. If he be afflicted with a spice of romance, he generally contrives to spend it in his reading—using that recreation as a safety-valve to carry off the superfluous steam, leaving behind the exact quantity required to carry him to the mark in business. Middle-class men may sip a drop of sentiment occasionally, as they do a liqueur ; but when business is in hand they pass the cup, and say they must keep their heads clear. Our public men are well aware of this feature in their countrymen's character, and are therefore rather pleased than otherwise when they find the advocates of measures to which they are opposed dealing in fustian declamation and bombast cir- cumstance. There is a want of reality in tragical orations, which prevents their moving John Bull to action. The laugh with which the House of Commons heard the magnanimous resolutions of the Suffolk agriculturists, was not provoked only by finding them as bad as the manufacturers—it was occasioned by a sense of dis- proportion between the words and the matter. It was a con- temptuous declaration that men who spoke in that fashion were not likely to accomplish much. It would be well if some crack orators on the Anti-Corn-law side would take the hint, and ab- stain from constructing their harangues upon Falstaff's princi- ple—" Make mine eyes look red, for I must speak it in King Cambyses' vein."