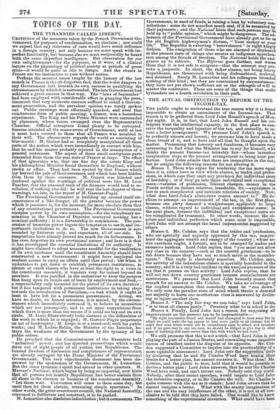 CRITICISM of the measures taken by the French Provisional Go- vernment, for purposes of condemnation, we disclaim ; nor could we expect that any strictures of ours would have much influence in a foreign country, not only because we must speak with im- perfect familiarity, but because also we must reciprocally be heard with the same imperfect intelligence. But observation for our own enlightenment—for the purposes, as it were, of a clinical lecture on the physiology of political society at periods of great crisis—it would be quite as idle to forego. And the events in France are too instructive to pass without notice.

Perhaps the severest lesson taught by the history of the last month in France is the oft-forgotten fact, that the worst dangers to any Government lurk beneath its own success in qualifying the circumstances by which it is surrounded. The late Government had achieved a great success in that way. The "laws of September" had been employed with considerable effect in gagging the press, insomuch that very moderate censure sufficed to entail a Govern- ment prosecution, and the prevalent opinion was rarely spoken out. Public meetings were effectually quashed, and even that cumbersome form of public meeting, a dinner, was a hazardous experiment. The King and his Prime Minister were surrounded by placemen, whose voices swamped even the Representative Chamber. Official corruption found plenty to be corrupted. Success attended all the manoeuvres of Government, until at last it must have seemed to them that all France was moulded to their will. The cheese-mite regards the world as consisting of blue-mould: M. Guizot had so completely manipulated all those parts of the nation which were immediately in contact with him, that he and his master probably rejoiced in the assumption of a general rottenness. The aspect of those small contiguous parts concealed from them the real state of France at large. The effect of that ignorance was, that one fine day the astute King and his philosophical Minister found themselves in England, without crown or office. They had been ejected by that France which lay beyond the pale of their successes, and which had been hidden from them by those successes. M. Guizot was blinded and deafened against the warnings of political seers like M. Leon Faucher, that the unsound state of the finances would lead to re- volution, if nothing else did: he will read the last chapter of those warnings, too late, in the report of M. Gamier-Pages.

The Provisional Government is building up around itself cir- cumstances of a like danger, all the greater because the power which it possesses is, for the moment, far more absolute than that of any constitutional government. The Provisional Government occupies power by its own assumption,—for the tumultuaryno- mination in the Chamber of Deputies conveyed nothing but a nominal authority: it is a dictatorship in commission. The pos., session of immense power begets the temptation to use it, and im- portunate invitations to do so. The new Government is sur- rounded by flatterers only, and expectants, all of one side. Its temptations have already proved too much for its forbearance. It has even forgotten its own provisional nature ; and here is it that it has overstepped the essential limitations of its authority. It might have claimed to adopt measures needful for the vindication of its own existence until the constituent Assembly should have constructed a new Government : it might have employed the readiest means to carry on affairs until that period : but when it undertakes to put down or establish permanent institutions, to silence or crush classes who have at least the right to a voice in the constituent assembly, it wanders very far indeed beyond its province. It was justified in the endeavour to keep the paupers that hang upon its hands out of harm by employment and food,— a responsibility only incurred for the period of its own duration ; but it has tampered with permanent institutions in taking steps towards the introduction of Socialism,—a task which it ought at least to have left for a permanent government. Acting, we have no doubt, on honest intention, it is misled, by the circum- stances which immediately surround it, to believe in necessities which are not peremptory, and to act upon compulsions from which there is more than one rescue if it could see beyond its own circle. M. Louis Blanc already looks alarmed at the difficulties of the work in which he is engaged ; M. Garnier-Pages perpetrates an act of bankruptcy ; M. Arago is at a stand-still with his public works ; and M. Ledru-Rollin, G the Minister of the Interior, be- trays the weakness of the Government by the tyranny of his public orders.

He preached that the Commissioners of the Executive hold "unlimited" power, and has directed proceedings which would drive out of sight people of all parties but Republicans. The boasted freedom of discussion and completeness of representation are already outraged by the Home Minister of the Provisional Government. This very objectionable document has been dis- avowed by the spokesman of the Government, M. Lamartine. But the same tyrannic spirit had spread in other quarters. M. Marrast's National, which began by being so impartial, now hints that all persons not heartily Republican had better abstain from all share in the election or business of the constituent Assembly. "Let them wait. Conviction will come to them some day, but until then let them abstain, remaining simple spectators." In other words, the great constituent council, the National Assembly, convened to deliberate and construct, is to be packed. M. Lamartine also disclaims intimidation ; but it commences. The

Government, in need of funds, is raising a loan by voluntary con- tributions : some do not manifest much zeal, if it be measured by their payments ; and the National hints that such persons may be held up to " public opinion," which might be dangerous. The ad- herents of the Provisional Government have already got as far as the old English highwayman's dictum, " Your money or your life." The Republic is extorting " benevolences " in right kingly fashion. The emigration of those who are alarmed or displeased at the present state of things also creates an indignant apprehen- sion among the friends of freedom. The National holds the emi- grants up to ridicule. The Rybrine goes further, and warns them that it is not safe to emigrate—that the attempt may pro- voke a jacquerie. In short, the richer classes, not being hearty Republicans, are threatened with being disfranchised, mulcted, and detained. Surely M. Lamartine and his colleagues intended nothing of this kind ; but they are constrained by circumstances : they have not yet shown sufficient art or the strength of will to master the constraint. These are some of the things that make bystanders see a fourth revolution in their path.