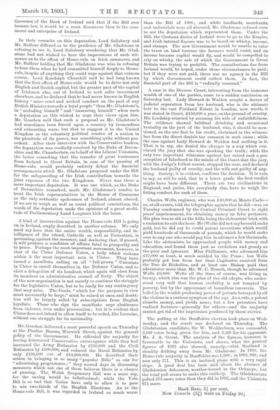 at all events, told the telegraphic agents that he did—was on Tuesday condemned by the Central Criminal Court to eight years' imprisonment, for obtaining money on false pretences. His plan was as old as the hills, being the alchemists' trick with a variation to suit the hour. He (Wells) did not say he could make gold, but he did say he could patent inventions which would yield hundreds of thousands of pounds, which he would make over to any one who would pay him in advance a few thousands. Like the alchemists, he approached people with money and education, and found them just as credulous and greedy as the poor and ignorant. Miss Phillimore, who advanced him 217,000 at least, is much scolded by the Press ; but Wells probably got less from her than Cagliostro received from the Duo de Richelieu, and at least one Bishop paid that adventurer more than Mr. W. C. Trench, though he advanced Wells £6,000. Wells all the time, of course, was living in luxury, which also was the plan of the old adepts, who under- stood very well that human credulity is not tempted by poverty, but by the appearance of boundless resources. The belief in the wealth-producing power of patents betrayed by all the victims is a curious symptom of the age. As a rule, a patent absorbs money, and yields none; but a few patentees have realised fortunes—generally for others—and the majority cannot get rid of the impression produced by those stories.