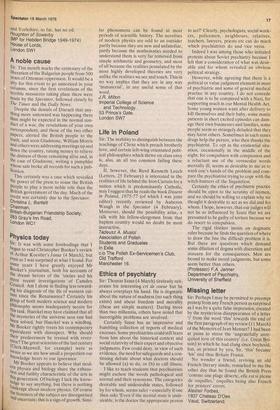 Sir: Thomas Szasz (4 March) tirelessly reiterates his interesting cri de coeur but he always overplays his hand. He is dogmatic about the nature of madness (no such thing exists) and about freedom and morality (these are simple matters). During more than two millennia, others have noted that incorrigible problems are involved.

Certainly Szasz has an impressive and humbling collection of reports of medical excesses. Some psychiatrists could still learn from him about the historical context and social relativity of their expert and objective judgments. Few could deny, in view of such evidence, the need for safeguards and a continuing debate about what doctors should be allowed (a) to do, or (b) to call. illness.

I like to teach students that psychiatrists might eschew the words pathological and normal and their synonyms. The categories desirable and undesirable states, followed by for whom, seems safer —especially if one then asks 'Even if the mental state is undesirable, is the doctor the appropriate person to act?' Clearly, psychologists, social workers, policemen, neighbours, relatives, teachers, lawyers, priests etc can do much which psychiatrists do and vice versa.

Indeed I was among those who initiated protests about Soviet psychiatry because I felt that a consideration of what was desirable and for whom revealed an obvious political strategy.

However, while agreeing that there is a political or value judgment element in most of psychiatric and some of general medical practice in any country, I do not concede that one is to be compared with a Nazi, for supporting much in our Mental Health Act. Some young women want after delivery to kill themselves and their baby, some manic patients in short excited episodes can damage their own businesses and families, some people seem so strangely deluded that they may harm others. Sometimes in such states drugs help the person, who then thanks the psychiatrist. To opt in the existential situation, occasionally in the middle of the night, for compulsion with compassion and a reluctant use of the vernacular words mentally ill, seems as desirable to me as to wash one's hands of the problem and compare the psychiatrist trying to cope with the witch-hunters of the Inquisition.

Certainly the ethics of psychiatric practice should be open to the scrutiny of laymen, and we should be willing to explain why we thought it desirable to act as we did and for whom. I hope, however, that our judges will not be so influenced by Szasz that we are presumed to be guilty of torture because we do resort to compulsion.

The rigid thinker insists on dogmatic rules because he finds the question of where to draw the line the difficult problem it is. But there are questions which demand some dilution of dogma with discretion and concern for the consequences. Men are bound to make moral judgments, but some seem better than others.