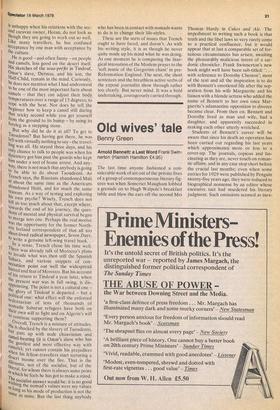 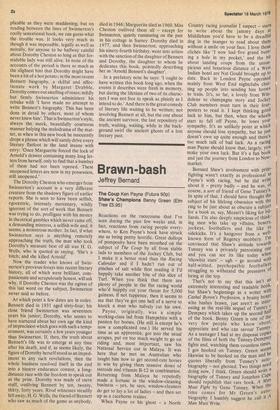 Arnold Bennett: a Last Word Frank Swinnerton (Hamish Hamilton £4.95) The last time anyone fashioned a considerable work of art out of the private lives of a group of contemporaneous literary figures was when Somerset Maugham lobbed a grenade on to Hugh Walpole's breakfast table and blew the ears off the second Mrs

Thomas Hardy in Cakes and Ale. The impediment to writing such a book is that truth and the libel laws so very rarely come to a practical confluence, but it would appear that at last a comparable set of fortuitous circumstances has arisen, awaiting the pleasurably malicious intent of a sardonic chronicler. Frank Swinnerton's new book might well have been sub-titled: `. with reference to Dorothy Cheston'; most of the text and all the inspiration is to do with Bennett's emotional life after the separation from his wife Marguerite and his liaison with a blonde actress who added the name of Bennett to her own once Marguerite's adamantine opposition to divorce became clear. From then on, Bennett and Dorothy lived as man and wife, had a daughter, and apparently succeeded in making each other utterly wretched. Students of Bennett's career will be aware that since his death an operation has been carried out regarding his last years which approximates more or less to a cover-up. The journals, copious and fascinating as they are, never touch on romantic affairs, and in any case stop short before the crucial last months; even when some entries for 1929 were published by Penguin twenty-five years ago, they were reduced to biographical nonsense by an editor whose excessive tact had murdered his literary judgment. Such omissions seemed as inex plicable as they were maddening, but on reading between the lines of Swinnerton's coolly sensational book, we can guess what the trouble was. It looks very much as though it was impossible, legally as well as morally, for anyone to be halfway candid about Dorothy Cheston so long as that formidable lady was still alive. In none of the accounts of the period is there so much as the slightest hint that Dorothy might have been a bit of a hot potato; in the most recent Bennett biography, a skilful and affectionate work by Margaret Drabble, Dorothy comes out smelling of roses; mildly but firmly Swinnerton administers his rebuke with 'I have made no attempt to write Bennett's biography. This has been done in detail by others, most of whom never knew him'. That is Swinnerton's style, always the meek, beautifully courteous manner belying the melodrama of the matter, as when in this new book he innocently drops a phrase which will surely drive every literary flatfoot in the land insane with envy: 'Once Marguerite forced the lock of Arnold's drawer containing many long letters from herself, only to find that a number of them had not been opened. These unopened letters are now in my possession, still unopened.'

The Dorothy Cheston who emerges from Swinnerton's account is a very different creature from the shadowy figure of earlier reports. She is seen to have been selfish, egocentric, intensely mercenary, wildly ignorant of the sort of work that Bennett was trying to do, profligate with his money in theatrical gambles which never came off, a demanding mistress, a selfish wife and, it seems, a monstrous mother. In fact, if what Swinnerton says is anything remotely approaching the truth, the man who took Dorothy's measure best of all was H. G. Wells, who is quoted as saying, 'She's a bitch; and she killed Arnold'.

Now the reader who knows of Swinnerton's previous forays into recent literary history, all of which were brilliant, compassionate and scrupulously honest, will ask why, if Dorothy Cheston was the ogress of this last word on the subject, Swinnerton never said so before.

At which point a few dates are in order. Bennett died in 1931 aged sixty-four; his close friend Swinnerton was seventeen years his junior; Dorothy, who seems to have nurtured about her own age the kind of imprecision which goes with such a temperament, was certainly a few years younger than Swinnerton. If, then, the truth about Bennett's life was to emerge at any time after his death, and if, as seems likely, the figure of Dorothy herself stood as an impediment to any such revelations, then the whole business resolved itself in the end into a bizarre endurance contest, a long distance race with the freedom to speak out as the prize. Dorothy was made of stern stuff, outliving Bennett by ten, twenty, thirty, forty years. Rival witnesses steadily fell away; H. G. Wells, the friend of Bennett who saw as much of the game as anybody, died in 1946; Marguerite died in 1960. Miss Cheston outlived them all — except for Swinnerton, quietly ruminating on the past in his cottage in Surrey. Dorothy died in 1977, and then Swinnerton, approaching his ninety-fourth birthday, went into action with the sanction of the daughter of Bennett and Dorothy, the daughter to whom he dedicates this book, pointedly describing her as 'Arnold Bennett's daughter'.

In a prefatory note he says: 'I ought to have written this book long ago, when the events it describes were fresh in memory, but during the lifetime of two of its characters I was not free to speak as plainly as I intend to do.' And there is the great comedy of literary life waiting to be written; not involving Bennett at all, but the one about the ancient survivor, the last repository of truth, waiting, waiting, while in the background swirl the ancient ghosts of a lost literary past.