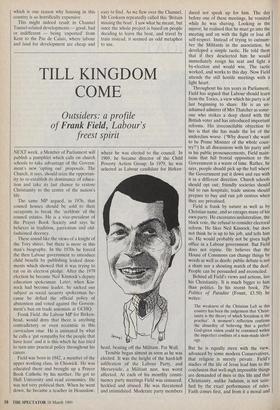 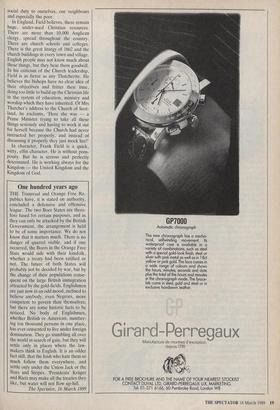 NEXT week, a Member of Parliament will publish a pamphlet which calls on church schools to take advantage of the Govern- ment's new 'opting out' proposals. The Church, it says, should seize the opportun- ity to re-establish its dominance of educa- tion and take its last chance to restore Christianity to the centre of the nation's life.

The same MP argued, in 1976, that council houses should be sold to their occupants to break the 'serfdom' of the council estates. He is a vice-president of the Prayer Book Society and says he believes in tradition, patriotism and old- fashioned decency.

These sound like the views of a knight of the Tory shires, but there is more in this man's biography. In the 1970s he forced the then Labour government to introduce child benefit by publishing leaked docu- ments which showed that it was trying to rat on its election pledge. After the 1979 election he became Neil Kinnock's deputy education spokesman. Later, when Kin- nock had become leader, he sacked our subject as social security spokesman be- cause he defied the official policy of abstention and voted against the Govern- ment's ban on trade unionists at GCHQ.

Frank Field, the Labour MP for Birken- head, would deny that there is anything contradictory or even eccentric in this curriculum vitae. He is animated by what he calls a 'gut sympathy for the people that have least' and it is this which he has tried to turn into practical policy throughout his career.

Field was born in 1942, a member of the upper working class, in Chiswick. He was educated there and brought up a Prayer Book Catholic by his mother. He got to Hull University and read economics. He was not very political then. When he went down, he became a teacher in Hounslow, where he was elected to the council. In 1969, he became director of the Child Poverty Action Group. In 1979, he was selected as Labour candidate for Birken- head, beating off the Militant, Pat Wall.

Trouble began almost as soon as he was elected. It was the height of the hard-left infiltration of the Labour Party, and Merseyside, a Militant nest, was worst affected. At each of his monthly consti- tuency party meetings Field was censured, heckled and abused. He was threatened and intimidated. Moderate party members dared not speak up for him. The day before one of these meetings, he vomited while he was shaving. Looking in the mirror, he realised that he must go into the meeting and on with the fight or lose all self-respect. Instead of trying to outnum- ber the Militants in the association, he developed a simple tactic. He told them that if they deselected him he would immediately resign his seat and fight a by-election and would win. The tactic worked, and works to this day. Now Field attends the still hostile meetings with a light heart.

Throughout his ten years in Parliament, Field has argued that Labour should learn from the Tories, a view which his party is at last beginning to share. He is an un- ashamed admirer of Mrs Thatcher as some- one who strikes a deep chord with the British voter and has introduced important reforms. His irreconcilable objection to her is that she has made the lot of the underclass worse. ('Why doesn't she want to be Prime Minister of the whole coun- try?') In all discussions with his party and in his public pronouncements, Field main- tains that full frontal opposition to the Government is a waste of time. Rather, he says, people should pick up the ball where the Government put it down and run with it in a different direction. Church schools should opt out; friendly societies should bid to run hospitals; trade unions should prepare to buy and run job centres when they are privatised.

Field is frank by nature as well as by Christian name, and so enrages many of his own party. He excoriates unilateralism, the block vote, the refusal to consider electoral reform. He likes Neil Kinnock, but does not think he is up to his job, and tells him so. He would probably not be given high office in a Labour government. But Field does not repine. He believes that the House of Commons can change things by words as well as deeds: public debate is not a sham nor a shouting match of the deaf. People can be persuaded and reconciled.

Behind all Field's views and actions, lies his Christianity. It is much bigger to him than politics. In his recent book, The Politics of Paradise (Fount, £3.50) he writes:

The weakness of the Christian Left in this country has been the judgement that 'Christ- ianity is the theory of which Socialism is the practice'. A moment's reflection confirms the absurdity of believing that a perfect God-given vision could be contained within the imperfect confines of a man-made ideol- ogy.

But he is equally stern with the view, advanced by some modern Conservatives, that religion is merely private. Field's studies of the life of Jesus lead him to the conclusion that well-nigh impossible things are demanded of men in this life and that Christianity, unlike Judaism, is not satis- fied by the exact performance of rules. Faith comes first, and from it a moral and social duty to ourselves, our neighbours and especially the poor.

In England, Field believes, there remain huge, under-used Christian resources. There are more than 10,000 Anglican clergy, spread throughout the country. There are church schools and colleges. There is the great liturgy of 1662 and the church buildings in every town and village. English people may not know much about these things, but they bear them goodwill. In his criticism of the Church leadership, Field is as fierce as any Thatcherite. He believes the bishops have no clear idea of their objectives and fritter their time, doing too little to build up the Christian life in the system of education, ministry and worship which they have inherited. Of Mrs Thatcher's address to the Church of Scot- land, he exclaims, 'Here she was — a Prime Minister trying to take all these things seriously and having to work it out for herself because the Church had never instructed her properly, and instead of discussing it properly they just mock her!'

In character, Frank Field is a quick, witty, elfin character. He is without pom- posity. But he is serious and perfectly determined. He is working always for the Kingdom — the United Kingdom and the Kingdom of God.