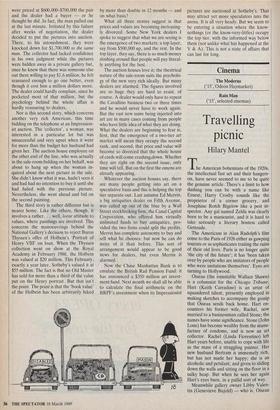 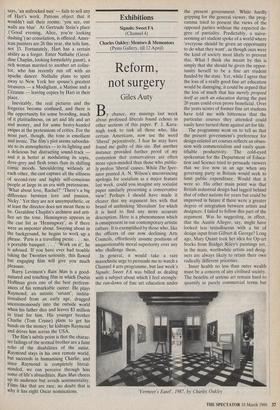 The American bohemians of the 1920s, the intellectual fast set and their hangers- on, have never seemed to me to be quite the genuine article. There's a limit to how dashing you can be with a name like Ernest; Harry Crosby sounds like the proprietor of a corner grocery, and Josephine Rotch Bigelow like a pest in- spector. Any gal named Zelda was clearly born to be a manicurist, and it is hard to take seriously a literary hostess called Gertrude.

The Americans in Alan Rudolph's film come to the Paris of 1926 either as gawping tourists or as sophisticates trailing the ruins of their old lives. Paris is no longer quite `the city of the future'; it has 'been taken over by people who are imitators of people who were imitations themselves'. Eyes are turning to Hollywood.

Oiseau (the inimitable Wallace Shawn) is a columnist for the Chicago Tribune; Hart (Keith Carradine) is an artist of squandered talent, presently employed in making sketches to accompany the gossip that Oiseau sends back home. Hart en- counters his former wife, Rachel, now married to a businessman called Stone; the names have some significance. Stone (John Lone) has become wealthy from the manu- facture of condoms, and is now an art collector. Rachel (Linda Fiorentino) left Hart years before, unable to cope with life as the mate of a struggling painter. Her new husband Bertram is immensely rich, but has not made her happy; she is an alcoholic and petulant, and given to sliding down the walls and sitting on the floor in a sulky heap. But when he sees her again Hart's eyes burn, in a pallid sort of way.

Meanwhile gallery owner Libby Valen- tin (Genevieve Bujold) — who is, Oiseau says, 'an unfrocked nun' — fails to sell any of Hart's work. Patrons object that it wouldn't suit their rooms: 'you see, our walls are blue'. At Gertrude Stein's place (`Good evening, Alice, you're looking dashing') no consolation, is offered; Amer- ican painters are 26 this year, she tells him, not 33. Fortunately, Hart has a certain ability as a forger. Enter Nathalie (Geral- dine. Chaplin, looking formidably gaunt), a rich woman married to another art collec- tor, who has recently run off with an apache dancer. Nathalie plans to spirit away to New York her spouse's greatest treasures — a Modigliani, a Matisse and a Cezanne — leaving copies by Hart in their place.

Inevitably, the real pictures and the forgeries become confused, and there is the opportunity for some brooding, much of it platitudinous, on art and life and art and money, and for some heavy-handed swipes at the pretensions of critics. For the most part, though, the tone is emollient and ironic. The film's plot seems subordin- ate to its atmospherics — to its lighting and a delicious but distracting sound-track and it is better at modulating its sepia, dove-grey and flesh tones than its shifting comic moods. Smouldering witlessly at each other, the cast capture all the silliness of second-rate and highly self-conscious people at large in an era with pretensions. `What about love, Rachel?' There's a big difference between love and passion, Nicky.' Yet they are not unsympathetic, or at least the director does not mean them to be. Geraldine Chaplin's archness and arti- fice set the tone. Hemingway appears in the cast list as 'Hemingway', as if there were an imposter about. Swaying about in the background, he begins to work up a phrase. 'Paris is a travelling picnic . . . no, a portable banquet. . . ."Work on it', he is advised. If you have ever had trouble taking the Twenties seriously, this flawed but engaging film will give you much pleasure.

Barry Levinson's Rain Man is a good- natured and touching film in which Dustin Hoffman gives one of the best perform- ances of his remarkable career. He plays Raymond, an autistic `savant', institu- tionalised from an early age, dragged unceremoniously into the outside world when his father dies and leaves $3 million in trust for him. His younger brother Charlie (Tom Cruise) plans to get his hands on the money; he kidnaps Raymond and drives him across the USA.

The film's subtle point is that the charac- ter failings of the normal brother are a faint echo of the disabilities of the autist. Raymond stays in his own remote world, but succeeds in humanising Charlie; and since Raymond is completely literal- minded, we can perceive through him some of life's absurdities. Rain Man cheers up its audience but avoids sentimentality. Films like that are rare; no doubt, that is why it has eight Oscar nominations.