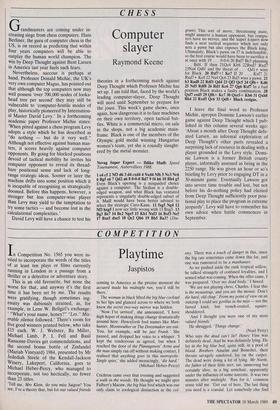 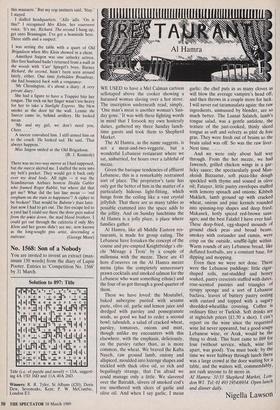 In Competition No. 1565 you were in- vited to incorporate the words of the titles of at least ten plays or films currently running in London in a passage from a thriller or a detective or adventure story.

This is an old favourite, but none the worse for that, and anyway it's the first time it has been set by me. The results were gratifying, though sometimes ing- enuity was dubiously strained, as, for example, in Lene W. Bellgirl's exchange: ' "What's your name, honey?" "Les." Mis- erable silence followed.' There's room for five good winners printed below, who take £15 each. W. J. Webster, Ba Miller, Michael Limb, P. I. Fell and Basil Ransome-Davies get commendations, and the second bonus bottle of Zinfandel (Mariah Vineyard) 1984, presented by Mr Jedediah Steele of the Kendall-Jackson Winery, Lakeport, California, goes to Michael Heber-Percy, who managed to incorporate, not too hectically, no fewer than 23 titles.

'Tell me, Mrs Klein, do you miss Saigon? You see, I've a theory that, but for our valued friends coming to America at the precise moment the accused made his midnight run, you'd still be there.'

The woman in black lifted the big blue cocktail to her lips and glanced across to where we both knew the secret two-way mirror was hidden.

'Now I've arrived', she announced, 'I have high hopes of making things change dramatically around here. Henceforth fool names like Man- hunter, Moon walker or The Dressmaker are out. You, for example, will be just Frank.' She paused, and dropped her voice to a whisper. 'I kept the rendezvous as agreed, but when I reached the door of the Plantagenets' Arms and the man simply ran off without making contact, I realised that anything goes in this metropolis. Single spies,' she added menacingly, 'die hard.'

Crichton came over that evening and suggested a walk in the woods. He thought we might spot Fulbert's Macaw, the big blue bird which was our only claim to zoological distinction in the col-

ony. There was a touch of danger in this, since the big cats sometimes came down this far, and' one was rumoured to be a manhunter.

As we pushed aside the rank tropical willow, he talked strangely of confused loyalties, and I sensed what was coming. When the offer came, I was prepared. 'Over my dead body,' I hissed. 'We are not playing chess, Charles. I fear this is the mousetrap, and you are the mouse. Don't die hard, old chap.' From my point of view on an outcrop I could see gorillas in the mist — not the furred kind, but trench-coated, square- shouldered.

'And I thought you were one of my most valued friends.'

He shrugged. 'Things change.' (Noel Petty) Who says the dead can't lie? Henry Vine was definitely dead. And he was definitely lying. He lay in the big blue bed, quite still, in a pool of blood. Brothers Anselm and Benedict, their throats savagely sundered, lay on the carpet. The dead were doing a lot of lying. Mr North, the father of their little sect, sat, unmoving but certainly alive, in a big armchair, apparently under the influence of some narcotic. It was two minutes after midnight. Run for it,' common sense told me. 'Get out of here. The last thing you need is a scandal. Let somebody else find this massacre.' But my cop instincts said, 'Stay.' I stayed.

I dialled headquarters. "Allo 'Oo is this?' I recognised Mrs Klein, her soursweet voice. 'It's me. Richard. The second I hang up, get onto Brannagan. I've got a homicide here. Three stiffs and a suspect.'

I was setting the table with a quart of Old Brigadoon when Mrs Klein showed in a client.

Amethyst Saigon was one unlucky actress. Her first husband hadn't returned from a walk in the woods with 'Cats' Spiegel's boys. Barney Richard, the second, hasn't been seen around lately, either. One time forbidden Broadway, she had bounced back with a vengeance. 'Mr Chessington, it's about a diary. A very private diary.'

She had a figure to have a Trappist bite her tongue. The rock on her finger wasn't too heavy for her to take a Starlight Express. She blew smoke as the door hit the wall. Lennie the Sneeze came in, behind artillery, He looked mean.

A sneeze convulsed him. I stiff-armed him on to the couch. He looked sad. He said, 'That always happens.'

Miss Saigon smiled at the Old Brigadoon. (B. J. Kennedy) There was no two-way mirror as I had supposed, but the sneeze alerted me. I stuffed the note into my belt's pocket. They would get it back only over my dead body. All right — it was the Scandinavian Airlines hostess Hedda Gabler who framed Roger Rabbit, but where did that get me? What did the last line mean — 'red sorghum on the train to happiness'? A cipher to be broken? That would be Babette's feast later. Just now I had to get out. The fire-escape led to a yard but I could see there the three guys naked from the waist down, the mad blood brothers. I could get out through the cafeteria if only Mrs Klein and her goons didn't see me, now known as the long-sought piss artist, descending a