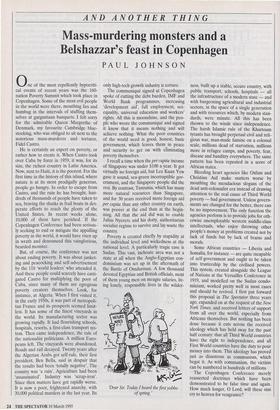 Mass-murdering monsters and a Belshazzar's feast in Copenhagen

One of the most repellently hypocriti- cal events of recent years was the 160- nation Poverty Summit which took place in Copenhagen. Some of the most evil people in the world were there, mouthing lies and humbug in the intervals of stuffing them- selves at gargantuan banquets. I felt sorry for the admirable Queen Margrethe of Denmark, my favourite Cambridge blue- stocking, who was obliged to sit next to the notorious mass-murderer and torturer, Fidel Castro.

He is certainly an expert on poverty, or rather how to create it. When Castro took over Cuba by force in 1959, it was, for its size, the richest country in Latin America. Now, next to Haiti, it is the poorest. For the first time in the history of this island, where nature is at its most prodigally generous, people go hungry. In order to escape from Castro, and the ruin he has brought, hun- dreds of thousands of people have taken to sea, braving the sharks in frail boats in des- perate efforts to reach the plenty of the United States. In recent weeks alone, 10,000 of them have perished. If the Copenhagen Conference had been serious- ly seeking to end or mitigate the appalling poverty in the world, it would have risen up in wrath and denounced this vainglorious, bearded monster.

But, of course, the conference was not about ending poverty. It was about junket- ing and peacocking and self-advertisement by the 118 'world leaders' who attended it. And these people could scarcely have casti- gated Castro for multiplying the poor of Cuba, since many of them are egregious poverty creators themselves. Look, for instance, at Algeria. When I first visited it, in the early 1950s, it was part of metropoli- tan France and its prospects seemed limit- less. It has some of the finest vineyards in the world. Its manufacturing sector was growing rapidly. It had flourishing schools, hospitals, resorts, a first-class transport sys- tem. Then came independence, the rule of the nationalist politicians. A million Euro- peans left. The vineyards were abandoned. Roads and rail decayed. Twenty years after the Algerian Arabs got self-rule, their first president, Ben Bella, said in despair that the results had been 'totally negative'. The country was 'a ruin'. Agriculture had been `assassinated'. Industry was 'scrap-iron'. Since then matters have got rapidly worse. It is now a poor, frightened anarchy, with 30,000 political murders in the last year. Its only high-tech growth industry is torture.

The communiqué signed at Copenhagen spoke of cutting the debt burden, IMF and World Bank programmes, increasing `development aid', full employment, sex- equality, universal education and workers' rights. All this is moonshine, and the peo- ple who wrote the communiqué and signed it know that it means nothing and will achieve nothing. What the poor countries of the world need is good, honest, basic government, which leaves them in peace and security to get on with eliminating poverty themselves.

I recall a time when the per capita income of Singapore was under $100 a year. It got virtually no foreign aid, but Lee Kuan Yew gave it sound, sea-green incorruptible gov- ernment, and the Singapore people did the rest. By contrast, Tanzania, which has many more natural resources than Singapore, and for 30 years received more foreign aid per capita than any other country on earth, was poorer at the end than at the begin- ning. All that the aid did was to enable Julius Nyerere and his dotty, authoritarian socialist regime to survive and lay waste the country. Poverty is created chiefly by stupidity at the individual level and wickedness at the national level. A particularly tragic case is Sudan. This vast, inchoate area was not a state at all when the Anglo-Egyptian con- dominium was set up in the aftermath of the Battle of Omdurman. A few thousand devoted Egyptian and British officials, most of them young men on meagre salaries, liv- ing lonely, responsible lives in the wilder- `Dear Sir. Today I heard the first yobbo of spring.' ness, built up a stable, secure country, with public transport, schools, hospitals — all the infrastructure of a modern state — and with burgeoning agricultural and industrial sectors, in the space of a single generation and with resources which, by modern stan- dards, were minute. All this has been thrown to the winds since independence. The harsh Islamic rule of the Khartoum tyrants has brought perpetual civil and reli- gious war, man-made famine on a colossal scale, millions dead of starvation, millions more in refugee camps, and poverty, fear, disease and banditry everywhere. The same pattern has been repeated in a score of African states.

Bleeding heart agencies like Oxfam and Christian Aid make matters worse by mouthing the mendacious slogans of the dead anti-colonialist era instead of drawing attention to the real cause of Third World poverty — bad government. Unless govern- ments are changed for the better, there can be no improvement. The only function the agencies perform is to provide jobs for oth- erwise unemployable western middle-class intellectuals, who enjoy throwing other people's money at problems created not by lack of funds but by lack of brains and morals.

Some African countries — Liberia and Somalia, for instance — are quite incapable of self-government and ought to be taken into trusteeship by the civilised powers. This system, created alongside the League of Nations at the Versailles Conference in 1919, and modelled on the Sudan condo- minium, worked pretty well in most cases and should be revived. I first put forward this proposal in The Spectator three years ago, expanded on at the request of the New York Times, and received letters of support from all over the world, especially from Africans themselves. But nothing has been done because it cuts across the received ideology which has held sway for the past half century: that all Third World countries have the right to independence, and all First World countries have the duty to pour money into them. This ideology has proved just as disastrous as communism, which begat it. As with communism, the victims can be numbered in hundreds of millions.

The Copenhagen Conference merely reasserted doctrines which have been demonstrated to be false time and again. How much longer, 0 Lord, will these sins cry to heaven for vengeance?