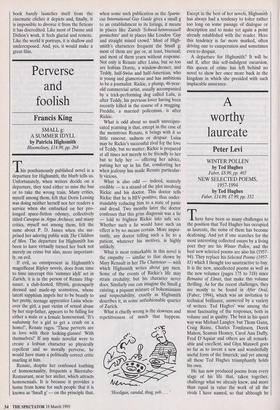 SMALL g: A SUMMER IDYLL by Patricia Highsmith Bloomsbury, £14.99, pp. 264 This posthumously published novel is a departure for Highsmith, the blurb tells us. Unfortunately, when writers decide on a departure, they tend either to miss the bus or to take the wrong train. Many critics, myself among them, felt that Doris Lessing was doing neither herself nor her readers a service when she embarked on her pro- longed space-fiction odyssey, collectively titled Canopus in Argus Archives; and many critics, myself not among them, felt the same about P. D. James when she sur- prised her adoring public with The Children of Men. The departure for Highsmith has been to have virtually turned her back not merely on crime but also, more important- ly, on evil.

If evil, so omnipresent in Highsmith's magnificent Ripley novels, does from time to time interrupt this 'summer idyll' set in Zurich, it is in the person of Renate Hag- nauer, a club-footed, fiftyish, grotesquely dressed and made-up seamstress, whose laterit sapphism impels her to be beastly to her pretty, teenage apprentice Luisa when- ever the girl, a past victim of sexual abuse by her step-father, appears to be falling for either a male or a female homosexual. 'It's wahsinnig for a girl to get a crush on a homo!', Renate rages. 'These perverts are in love with their looking-glasses! With themselves!' If any male novelist were to create a lesbian character so physically repellent and so morally perverse, he would have many a politically correct critic snarling at him.

Renate, despite her confessed loathing of homosexuality, frequents a Bierstube- Restaurant, near her atelier, which attracts homosexuals. It is because it provides a home from home for such people that it is known as 'Small g' — on the principle that, when some such publication as the Sparta- cus International Gay Guide gives a small g to an establishment in its listings, it means in places like Zurich `Schwul-heterosexuell gemischtes' and in places like London 'Gay and straight mixed crowd.' Most of High- smith's characters frequent the Small g; most of them are gay or, at least, bisexual; and most of them yearn without response. Not only is Renate after Luisa, but so too are lesbian Dorrie, a window-dresser, and Teddy, half-Swiss and half-American, who is young and glamorous and has ambitions to be a journalist. Rickie, a plump, 46-year- old commercial artist, usually accompanied by a trick-performing dog called Lulu, is after Teddy, his previous lover having been recently killed in the course of a mugging. Freddie, a married policeman, is after Rickie.

What is odd about so much unrecipro- cated yearning is that, except in the case of the monstrous Renate, it brings with it so little rancour, sadness or despair. Luisa may be Rickie's successful rival for the love of Teddy, but no matter: Rickie is prepared at all times not merely to be friendly to her but to help her — offering her advice, putting her up in his flat, comforting her when jealousy has made Renate particular- ly vicious.

What is also odd — indeed, scarcely credible — is a strand of the plot involving Rickie and his doctor. This doctor tells Riche that he is HIV-positive, thus under- standably reducing him to a state of panic and dread. Two months later the doctor confesses that this grim diagnosis was a lie — told to frighten Rickie into safe sex. Whether such a lie would have such an effect is by no means certain. More impor- tantly, any doctor telling such a lie to a patient, whatever his motives, is highly unlikely. What is most remarkable in this novel is the empathy — similar to that shown by Mary Renault in her The Charioteer — with which Highsmith writes about gay men. Some of the events of Rickie's life may strain credulity; but his character never does. Similarly one can imagine the Small g existing, a piquant mixture of bohemianism and respectability, exactly as Highsmith describes it, in some unfashionable quarter of Zurich.

What is chiefly wrong is the slowness and repetitiveness of much that happens.

Hooligan, vandal, thug, yob . . ' Except in the best of her novels, Highsmith has always had a tendency to loiter rather too long on some passage of dialogue or description and to make yet again a point already established with the reader. Here this tendency is far more marked, often driving one to exasperation and sometimes even to despair.

A departure for Highsmith? It will be sad if, after this self-indulgent excursion, this queen of crime has left behind no novel to show her once more back in the kingdom in which she presided with such implacable assurance.