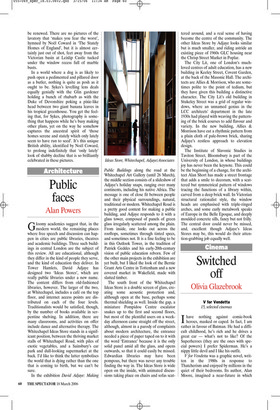 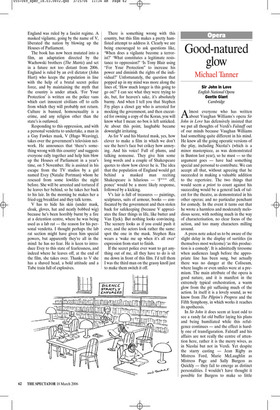 Ihave nothing against comic-book heroes, masked or caped. In fact, I am rather in favour of Batman. He had a difficult childhood, he’s rich and he drives a great car — what’s not to like? Of the Superheroes (they are the ones with special powers) I prefer Spiderman. He’s a nippy little devil and I like his outfit.

V for Vendetta was a graphic novel, written in the 1980s in response to Thatcherism and enjoyed by millions in the quiet of their bedrooms. Its author, Alan Moore, imagined a near-future in which England was ruled by a fascist regime. A masked vigilante, going by the name of V, liberated the nation by blowing up the Houses of Parliament.

The book has now been mutated into a film, an adaptation directed by the Wachowski brothers (The Matrix) and set in a future not too distant from 2006. England is ruled by an evil dictator (John Hurt) who keeps the population in line with the help of a brutal secret police force, and by maintaining the myth that the country is under attack. ‘For Your Protection’ is written on the police vans which cart innocent civilians off to cells from which they will probably not return. Culture is banned, homosexuality is a crime, and any religion other than the state’s is outlawed.

Responding to this oppression, and with a personal vendetta to undertake, a man in a Guy Fawkes mask, V (Hugo Weaving), takes over the government’s television network. He announces that ‘there’s something wrong with this country’ and suggests everyone rally together and help him blow up the Houses of Parliament in a year’s time, on 5 November. He is assisted in his escape from the TV studios by a girl named Evey (Natalie Portman) whom he rescued from some lowlifes the night before. She will be arrested and tortured if he leaves her behind, so he takes her back to his lair. In the morning he makes her a fried-egg breakfast and they talk terms.

V has to hide his skin (under mask, cloak, gloves, hat and neatly bobbed wig) because he’s been horribly burnt by a fire at a detention centre, where he was being used as a lab rat — the reason for his personal vendetta. I thought perhaps the lab rat section might have given him special powers, but apparently they’re all in the mind: he has no fear. He is keen to introduce Evey to this state of fearlessness, and indeed where he leaves off, at the end of the film, she takes over. Thanks to V she has a shaved head, a bold attitude and a Tube train full of explosives. There is something wrong with this country, but this film makes a pretty hamfisted attempt to address it. Clearly we are being encouraged to ask questions like, ‘When does a vigilante become a terrorist?’ ‘What constitutes a legitimate resistance to oppression?’ ‘Is Tony Blair using “For Your Protection” to increase his power and diminish the rights of the individual?’ Unfortunately, the question that popped up in my mind was more along the lines of, ‘How much longer is this going to go on?’ I can see what they were trying to do, but, for heaven’s sake, it’s absolutely barmy. And when I tell you that Stephen Fry plays a closet gay who is arrested for mocking the government, and then executed for owning a copy of the Koran, you will know what I mean: no box is left unticked. At about this point, laughable became downright irritating.

As for V and his blasted mask, yes, how clever to make a film in which we don’t see the hero’s face but crikey how annoying. And his voice! Full of plums, and talking nonsense. They give him some long words and a couple of Shakespeare quotes to show how clever he is. The idea that the population of England would get behind a masked man reciting Shakespeare is hilarious — ‘F*** off, ponce’ would be a more likely response, followed by a kicking.

V’s lair is full of treasures — paintings, sculptures, suits of armour, books — confiscated by the government and then stolen back for safekeeping (because V appreciates the finer things in life, like butter and Van Eyck). But nothing looks convincing. The scenery looks as if you could push it over, and the actors look rather the same: spot the one in the mask. Stephen Rea wears a ‘wake me up when it’s all over’ expression from start to finish.

If the secret police ever want to get anything out of me, all they have to do is sit me down in front of this film. I’d tell them I was the third man on the grassy knoll just to make them switch it off.