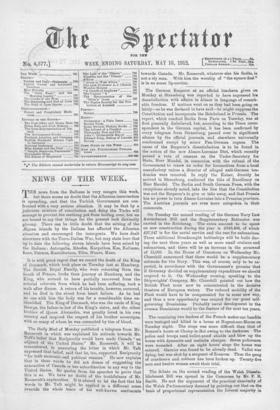 Page 1, 18 May 1912 — The German Emperor at an official luncheon given on Monday
Close

The German Emperor at an official luncheon given on Monday

at Strassburg was reported to have expressed his dissatisfaction with affairs in Alsace in language of remark- able freedom. If matters went on as they had been going on lately—so he was declared to have said—he might suppress the Constitution and incorporate the Reichsland in Prussia. The report., which reached Berlin from Paris on Tuesday, was at first generally disbelieved, but, according to the Times corre- spondent in the German capital, it has been confirmed by every telegram from Strassburg, passed over in significant silence by the official journals, and elsewhere universally condemned except by minor Pan-German organs. The cause of the Emperor's dissatisfaction is to be found in the action of the new .Alsace-Lorraine Diet, which recently passed a vote of censure on the Under-Secretary for State, Herr Mandel, in connexion with the refusal of the Government to renew an order for locomotives from a local manufactory unless a director of alleged anti-German ten- dencies were removed. In reply the Kaiser, directly he arrived in Strassburg, conferred the title of Excellency on Herr Mandel. The Berlin and South German Press, with the exceptions already noted, take the line that the Constitution was not the Emperor's to give or take away, and that Prussia has no power to turn Alsace-Lorraine into a Prussian province. The Austrian journals are even more outspoken in their comments.