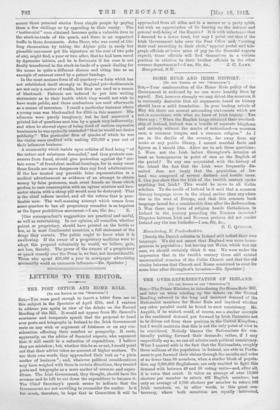 [To MI EDITOR 01 ma "3pserrres."3 Sta,—You were good enough to insert a letter from me on this subject in the Spectator of April 27th, and I venture to address you again in view of the debate on the Second Reading of the Bill. It would not appear from Mr. Samuel's courteous and temperate speech that the proposal .to hand over poets and telegraphs in Ireland to the Irish Government rests on any wish or argument of Irishmen or on any con- sideration affecting their comfort or prosperity. It rests, apparently, on the advice of financial experts, who represent that it will result in a reduction of expenditure. I believe they are mistaken ; but, whether this be so or not, I would point out that their advice takes no account of higher matters. To use their own words, they approached their task as "a plain matter of business "; and, whatever political considerations may have weighed with them in certain directions, they treated posts and telegraphs as a mere matter of revenue and expen- diture. The Irish Government, they thought, should have the revenue and be left to cut down the expenditure to balance it. The Chief Secretary's speech seems to indicate that the Government are not unwilling to reconsider the matter. Is it too much, therefore, to hope that in Committee it will be approached from all sides, not in a narrow or a party spirits but with an appreciation of its bearing on the defence and general well-being of the Empire P It is with reluctance that I descend to a lower level, but may I point out that if the Irish Government take over the Post Office and, " cutting their coat according to their cloth," appoint postal and tele- graph officials at lower rates of pay (as the financial experts expect), these officials will find themselves in a curious position in relation to their brother officials in the other