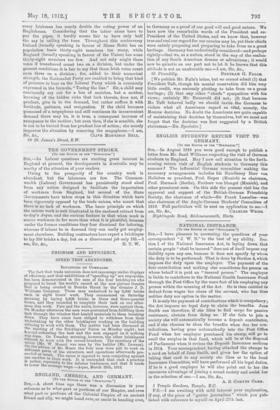 [To TUN EDITOR OP THIN "SPECTATOR."] Slit,—A short time ago there was a discussion in your columns as to what part or portions of our Empire, and even what part or portions of the Colonial Empire of an ancient friend and ally, we might hand over, or assist in handing over, to Germany as a proof of our good will and good nature. We have now the remarkable words of the President and ex- President of the United States, and we know that, however true and real our regard for our cousins may be, yet their chiefs were calmly proposing and preparing to take from us a great heritage. Germany has undoubtedly considered—and perhaps rightly—that we, as a nation, stood in the way of the realiza- tion of any South American dreams or adventures ; it would now be quixotic on our part not to let it be known that this attitude is not an unalterable one.—I am, Sir, &c., [We publish Mr. Falle's letter, but we cannot admit (1) that President Taft, though his mental reservation did him very little credit, was seriously plotting to take from us a great heritage ; (2) that any other " chiefs " sympathize with his views ; certainly Mr. Roosevelt did not; (3) that because Mr. Taft behaved badly we should invite the Germans to violate what all Americans regard as vital, namely, the Monroe doctrine. No doubt the Americans are quite capable of maintaining that doctrine by themselves, but we must not forget that the doctrine was first suggested by a British statesman.—En. Spectator.]