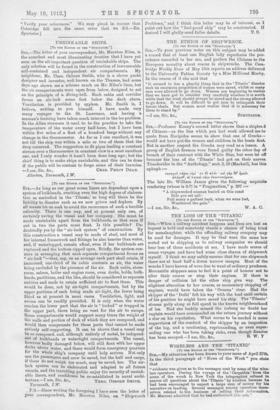 [To THE EDITOR OW THE "SPECTATOR."]

Sin, —The letter of your correspondent, Mr. Marston Niles, is the soundest and most illuminating treatise that I have yet seen on the all-important question of unsinkable ships. The only solution will be found in the construction of innumerable self-contained and independent air compartments. My neighbour, Mr. Theo. Osborn Smith, who is a clever yacht designer and inventor, well known on the Thames, had some days ago shown me a scheme much on Mr. Niles's lines, but the air compartments were open from below, designed to act on the principle of a diving-bell. Each cabin and corridor forms an air-look some feet below the deck above. Ventilation is provided by syphon. Mr. Smith is, I believe, writing to you himself. I have made very many voyages to the St. Lawrence, and having a seaman's training have taken much interest in the ice problem. In the Allan steamers it used to be the practice to take the temperature of the water every half-hour, but I have been within five miles of a fleet of a hundred bergs without any change in the thermometer. As far as I can recollect, it was not till the ship was within a mile or two of them that the drop occurred. The suggestion to fit pipes leading a constant stream over a thermometer in constant view is a most excellent one, and I only wonder it hasn't been done long ago ; but the chief thing is to make ships unsinkable, and this can be done if the public will be content to forgo some of their luxuries.