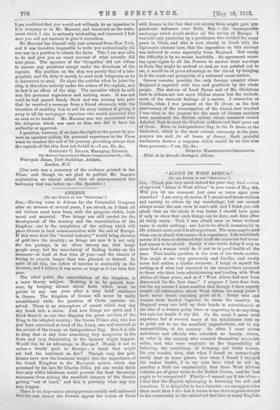 [To THE EDITOR OP THE " SPEOTLTOR."] Sin,—Having come to Athens for the Orientalist Congress after an absence of several years, I am struck, as I think all old visitors must have been, with the progress visible, both moral and material. Two things are still needed for the development of the country and the consolidation of the kingdom : one is the completion of the railway which will place Greece in land communication with the rest of Europe. If this were done the " tourist industry" would bring showers of gold into the country; as things are now it is not only the sea passage, in an often stormy sea, that keeps people away, but the uncertainty of finding berths on the steamers—at leaFit at this time of year—and the chance of having to remain longer than was planned or desired. In spite of all this, the inflow, of tourists is constantly on the increase, and I believe it was never so large as it has been this year.

The other point, the consolidation of the kingdom, is a more thorny subject. Nothing is to be gained, how. ever, by keeping silence about facts which must be patent to any one even after a very brief residence in Greece. The kingdom of Greece will never be really consolidated while the question of Crete remains un- solved. There is an atmosphere of unrest which may any day break into a storm. Just now things are quiet, and I think there is no one who disputes the great services of the King to his adopted country : the Crown Prince also, who has just been reinstated as head of the Army, was well received at the review of the troops on Independence Day. But it is idle to deny that at any time something very dangerous to the State and very threatening to the dynasty might happen. Would this be an advantage to Europe P Would it not be rather a deadly peril to Europe — a torch that might set half the continent on fire P Though very few poli- ticians have now the luminous insight into the importance of the Greek Kingdom in the European system which was possessed by the late Sir Charles Dilke, yet one would think that only wilful blindness could prevent the least far-seeing statesmen from seizing the manifold dangers of the Greeks getting "out of hand," and this is precisely what any day may happen.

with Greece is the fear that one among them might gain pre- ponderate influence over Suda Bay — the incomparable anchorage which would shelter all the navies of Europe. I was told only yesterday by a gentleman who resided for many years in Crete, and who is now closely in touch with the diplomatic element here, that the opposition on this account was believed to come especially from England. But surely the difficulty is by no means insoluble. An agreement secur- ing equal rights to all the Powers to anchor their warships in Such. Bay might be arrived at, and, as was pointed out to me, it would be of great advantage to the island by bringing to it the trade and prosperity of a, universal naval station.

Greece remains possibly the only foreign country where England is regarded with love and gratitude by the whole people. The statues of Lord Byron and of Mr. Gladstone here in Athens are not mere lifeless stones but the embodi- ment of the warmest feelings of a nation. I remember at Candia, when I was present at the Te Bohm on the first anniversary of the emancipation of the island, how touched I was when in the prayers for the souls of Cretan martyrs were mentioned the British sailors whose massacre caused Admiral Noel to send the Turkish soldiers and their guns out of Crete. Here, on Independence Day, in the Te Deunt at the Cathedral, which is the moat solemn ceremony in the year, prayers are said for all lovers of Greece. Such grateful sentiments deserve a response which would be no less wise than generous.—I am, Sir, &C.,