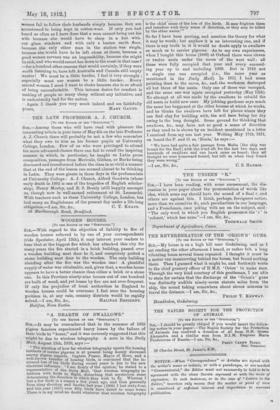 "A DEARTH OF SWALLOWS." [To THE EDITOR OF ME "BrEcrarou."]

S1E,—It may be remembered that in the summer of 1910 pigeon fanciers experienced heavy losses by the failure of their birds to " home," and it was seriously suggested that this might be due to wireless telegraphy. A note in the Daily Mail, August 15th, 1910, says :- " The question of how far wireless telegraphy upsets the homing instincts of carrier pigeons is at present being keenly discussed among Pigeon experts. Captain Fraser, Mayor of Hove, and a well-known breeder of homing birds, is convinced that the in- creased loss of his birds during recent years is duo to the new electrical influence. ' I am firmly of the opinion,' ho stated to a representative of the Daily Mail, 'that wireless telegraphy in- terferes with birds in flight, disturbing that mysterious sense determining the direction in which they wish to fly. Whereas I lost a few birds in a season a few years ago, and then generally from stray shooting and hawks, last year (1909) I lost sixty-four, and this year (1910) over fifty birds have failed to come home. There is in my mind no doubt whatever that wireless telegraphy

is the chief cause of the loss of the birds. It may frighten them and interfere with their sense of direction, or they may be killed by the ether waves.'" So far I have been quoting, and mention the theory for what it may be worth; but anyhow it is an interesting one, and if

as much as to carrier pigeons. As to my own experiences, when I bought this house (1902) at Oxford there were eleven

or twelve nests under the eaves of the west wall : all these were fully occupied that year and every succeed- ing year up to and including 1909. But in 1910 not a single one was occupied (i.e., the same year as mentioned in the Daily Mail). In 1911 I bad some painting done to the eaves, &c., and the workmen destroyed all but three of the nests. Only one of these was occupied, and the same one was again occupied yesterday (May 12th). No attempt at all was made by the swallows to rebuild the

old nests or build new ones. My jobbing gardener says much the same has happened at the other houses at which he works, and he thinks the swallows have left for places whore they can find clay for building with, the soil here being too dry owing to the long drought. Some ground for thinking that swallows, &c., may have not so good a sense of direction as they used to is shown by an incident mentioned in a letter I received from my son last year. Writing May 17th, 1911, on board the P. and 0. ss. ' Simla,' he says :—

" We have had quite a fair passage from Malta [the ship was bound for the East) with the wind aft for the last two days, and hundreds of swallows and one hawk came on board: they all thought we were homeward bound, but left us when they found they were wrong."