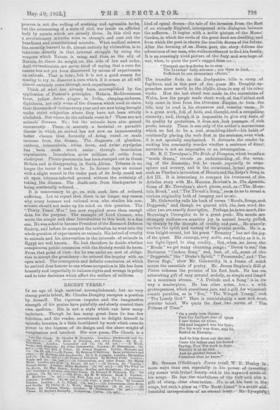 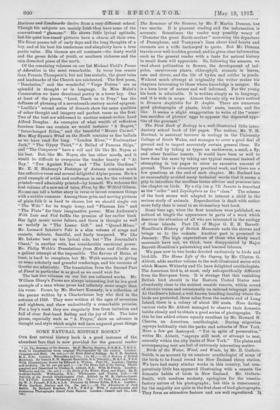 IN an. age of high metrical accomplishment,.. but no very strong poetic talent, Mr. Charles Doughty occupies a position by himself. The vigorous impulse and the imaginative strength of his genius have painfully and slowly created their own medium. His is not a style which can have many imitators. Though he has many great lines ho has few felicities, and the reader, accustomed to delight himself in episodic beauties, is a little bewildered by work which owes its power to the bigness of its design , and the sheer weight of imagination and intellect. His new poem, The Clouds, is a • (1) The Clouds. By Charles M. Doughty. London: Duckworth and Co. (as. net.] --- (2) The Bride of Dionysus, and other Poems. By R. C. Trevolyan. London : Longnums and Co. Ps. ed. net.1 — (3) Moods, gonOo. and Doggerels. By John Galsworthy. London: W. Heinemann. [Gs. not.]--(4) The Hal of Vision. By James Stephen, Dublin: Msunsel and Co. Ps. 6d. net.1---(6) Poems. Dv Seumas O'Sullivan. Same publishers and price.—(6) Ifortsone and Landmarks. By S. R. Lyeaght. London: hoiesnium and Co. 4s. M. net.3.---(7) Poems of Adoration. By Michael Field. London Sands an Go. Os. net.1--(8) Consecration, and other Poems. 11/ Mabel

The Invaders' daily, advance ; nor them to load,. Sufficient bo our elementary officers.".

The traveller finds in the Derbyshire bills 'a camp of fugitives, and in this, part of tho poem Mr. 'Doughty ap- proaches more nearly to the idyllic thantin any of his other,

works. How the last stand was made hal the mountains of Wales, how the people made short work ,of the:Cabinet arta. help came in time from the. Overseas ,Empieta,;to turn the.. tide, may be read in his strenuous and massive 'verse., It is a great work, full, of faith and thought ,and a compelling.

sincerity; and, though. it is impossible to give any taste of' its quality by quotations, it does, not-lack passages of rich poetic beauty. There is one only of the author's mannerisms' which we feel to be a real .stumbling-block—his habit oF continually placing the verb first in the sentence, even whet, it is not specially emphasized, It distracts the reader •. bj.

making him constantly wonder whether a sentence of clireet-, narrative is not an imperative . or an interrogation..

Mr. R. C. Trevelyan's The Bride of Dionysus, which he ealls.gt

ing of the dramatic+ but he excels ,especially in atrao- sphere and scenery, and in the occasional, lyrical pasaages,

such as Phmdra's invocation,of Hecate,and,the Satyr's Song in Act III. It is interesting to compare his treatment of the Ariadne story with Mr. Maurice Howlett's in The iigonists., Some of Mr. Trevelyau's short pieces, such „as The .Moun- tain Brook" and, " The Thrush's, Song,'', seem to us to reveal a,

curious originality both of imagery and mr.sic.

Mr, Galsworthy.caUs his book of verses "Moods, Songs, and, Doggerels," and though we quarrel with. the last word the other two are exactly descriptive, Perhaps he.is, too much like' Browning's Corregidor to be a great poet.. His, moods are strangely uniform-ea sensitive joy in natural beauty pulled; up sharply by the thought of cruelty, and pain,,. He scarcely, reaches the uplift and ecstasy of the greater moods. He .is .a

true knight-errant, but his poem " Errantry " has net the joy

of the quest. His .courage,:YerY noble and worthy as it is, is too tight-lipped to sing readily., Brit,,when...we .leave they

nearer the essentials of poetry. Mr. James Stepheu'.s /Ell of. Vision redeems the promise of his first book. He has an astonishing gift of easy natural melody, as simple and limpid

as a mountain stream. "A Prelude, and a Song " is in ita way a masterpiece. He has other notes, , too : a wild, grotesqueness, which sometimes jars, and a gift for whimsical cosmic parables, as in "Eve," " The Winged Tramp," and:

" The Lonely God." Here is unmistakably a new and most, genuine talent. We quote the first ,. two Iverses of " The, Fulness of Time."

Past the furthest star of space I saw Satan sit alone.

Old and haggard was his face ; For his work was done, and, he, Rested in Eternity.

And to him from out the Bun Came his father. and his friend Saying,.Now the work is done. Enmity is at an end. . And he guided Satan to Paradises that be knew."'

Mr. Spumes O'Sullivan's Poems reeall W. E.. Henley in , more wriya than one, especially in his power of investingy city scenes with lyrical beauty . and in the wayward music of; his songs. He has ..the wistfulness of 'the Celt :and gift of sharp, clear observation. Ire. is at his best in .hita. songs, but such n. Piece ae.!' The Earth-Lover "is a subtle heautifnl interpretation' of an eternal. hvany.- Mr,- layettgliql Horizons and Landmarks derive from a very different school. Though his subjects are mainly Irish they have none of the conventional "glamour." lie shows little lyrical aptitude, but his quiet Tow-toned pictures have a charm all their own. His finest poems tell of early days and the long thoughts of a boy, and at his beat his tenderness and 'simplicity have a true poetic value. His themes are all contrasts—the dusty world and the green fields of youth, or southern richness and the rain-drenched pines of the north.

Of the remaining volumes on our list Michael Field's Poems of Adoration is the most remarkable. In verse less ornate than Francis Thompson's, but not less ecstatic, the great tales and landmarks of the Church are celebrated. The first poem, "Desolation," and the wondefful "Virgo Potena " are as splendid in thought as in language. In Miss Malet's Consecration we have devotional poetry in a lower key. One at least of the pieces, "Lord, Teach us to Pray," has the deftness of phrasing of a seventeenth-century sacred epigram. " Lucille's " second series of Sonnets show the same qualities of sober thought and imagery and perfect verse as the first. Two of the best are addressed to another sonnet-writer, Lord Alfred Douglas. As examples of what wealth of reflection fourteen lines can contain we would instance " A Regret," " Interchanged Roles," and the beautiful " Mount Carmel." Mrs. May Byron's Wind on the Heath contains as fine ballads as we have read for long. "London River," " Foulweather Jack," " The Gypsy Taint," " A Ballad of Famous Ships," and "The Conqueror" have a roll and lilt like Mr. Noyes at his best. But, like Mr. Noyes, she has other moods, and it would be difficult to overpraise the tender beauty of " At Bay,"' " Two Against Fate," and " The Little Gardens." Mr. E. H. Blakeney's Footsteps of Autumn contains much fine reflective verse and several delightful Alpine poems. He is a good example of artist and craftsman in one, for the volume is printed—and admirably printed—by himself. We welcome the first volume of a new set of tales, Fires, by Mr. Wilfrid Gibson. No one can tell a better story in verse or invest common things with a subtler romance. Among these grim and moving pictures of plain folk it is hard to choose, but we should single out " The Wife " for its tragic irony, and " Flannan Isle " and "The Flute" for their imaginative power. Miss Anderson's Wit& Lute and Viol fulfils the promise of her earlier book

Her light music never falters, and there is thought as well as melody in " The Lesser Gift " and " Quand-M3rne."

Mr. Leonard Inkster's Vale is a slim volume of songs and sonnets, delicate, fanciful, and finely tempered. We like Mr. Inkster best on his lyrical side, but "The Journalist's Chant," in another vein, has considerable emotional power. Mr. Philip Webb's Translations from Heine and Goethe are a gallant attempt at the impossible. The flavour of Heine, at least, is hard to recapture, but Mr. Webb succeeds in giving us some scholarly and graceful renderings, and his versions of Goethe are admirable. The translation from the Second Part of Faust in particular is as good as we could wish for. The last two volumes on our list are collected works. Mr. William Sharp's Poems are always interesting, but he is a good example of a man whose prose had infinitely more magic than his verse. Verses, by Mr. Herbert Kennedy, is a collection of the poems written by a Charterhouse boy who died in the

autumn of 1910. They were written at the ages of seventeen and eighteen, and show undoubtedly a remarkable promise. For a boy's work they are singularly free from imitation and full of clear first-hand feeling and the joy of life. The later pieces, especially such as " A Prayer," show an advance in thought and style which might well have augured great things.