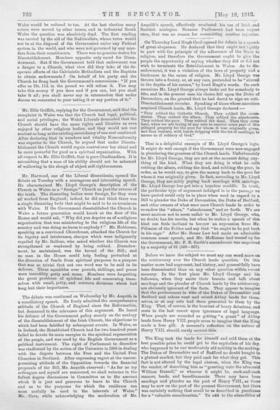 Before we leave the subject we must say one word

more on the controversy over the Church lands question. On this matter more bad argument, bad history, and general folly have been disseminated than on any other question within recent memory. In the first place Mr. Lloyd George and his followers, when they smite their breasts and talk about sacrilege and the plunder of Church lands by the aristocracy, are obviously ignorant of the facts. They appear to imagine that the predecessors in title of the Dukes of Devonshire and Bedford and others went and seized Abbey lands for them- selves, or at any rate had them presented to them by the King. That, of course, is the hoariest of hoary delusions, and rests in the last resort upon ignorance of legal language. When people are recorded as getting "a grant" of Abbey lands from Henry VIII. people seem to imagine that the King made a free gift. A. moment's reflection on the nature of Henry VIII, should surely correct this.