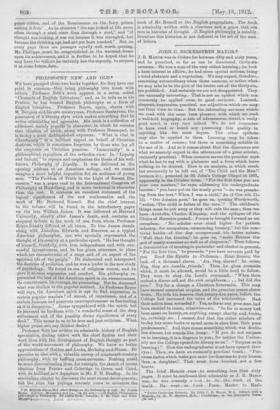 PHILOSOPHY NEW AND OLD.* WE have grouped these two.books together,

for they have one Point in common—they. bring philosophy into touch with letters. Professor Seth's :work appears in a series called. "Channels of Feiglish.Literature," and, as he tells us in his Preface, he lies treated • English. phiIoSophy as a form of Englieh 'literature. Professor Royce, again, shares with M. Bergeonandlis own countryman, Professor Santayana, the possession of A literary style which makes everything that he writes stimulating and egreertble. His book. is a collection of addresses, mainly poptiltri in character, in which he restates that idealism of which, along with Professor Bosanquet, he is today a, most distinguished exponent. " What is vital in Christianity" is a brilliant appeal on behalf of Christian doctrine, which is sometimes forgotten by those who lay all the emphasis on Christian practice.• "Immortality" is a ph.ilosophicel. exposition of the orthodox view. In." Loyalty and Insight " lie repeats and emphasizeathe thesis of his well. known 117.11.1psophy of .Tioyalty. It was delivered as the opening ° address at an American college, and we cannot iMagine a more helpful expositien for an audience of young Men. "The Problem of Truth in the Light of Recent Dis- cussion" was a paper read to the International Congress of Philosophy at Heidelberg, and is more technical in character than the rest. ft contains an excellent statement of the logical significenee of the new mathematics and the work of ' Mr. Bertrand Russell. But the chief , interest in the VoluMe will bp, found in the introductory paper on the late William James. It was delivered at Harvard -University, shortly. after James's death, . and contains an eloquent tribute to the work of one from whom Professor Royce frankly differed at all times. To him James stands along with Jonathan Edwards and Emerson as a typical American philopophers One who specially represented the thought of lii.s.country at a, particular epoch. "He has thought of himself, fruitfully, with true independence. and with Eine, cessful ineentivenees, and he has . given utterance to ideas which are characteristic. of a stage and of an aspect of the spiritual life of the people." . He elaborated and interpreted the doctriuc of evolution, and he was a leader in the new study of rerehology. He found an era of religious unrest, and he gave it atone° expression and comfort. His philosophy re-, Presented, the best of the American spirit in its strenuousness, its° concreteness, its, couragesits.pioneerings But be. deepened what, was shallow in the popular instinct, As Professor Royce well says, the American. spirit is apt to find. expression in certain popular maxims," of unrest, of impatience, and of a certain humane° end generous unscrupulousness as fascinating. as it is dangerone." James sympathized with the spirit, bet he leavened its hardness with "a wonderful sense of the deep seriousness and of the possibly divine significance of every deed." This aeeme to, us to be true and just criticism. What higher pritiee ean, any, 'Winker desire? • Professor Seth has written an admirable history of English speculation, d'ealing rather. with the chief figures and their work tiles: with the development. of English thought as part of the world-movement of philosophy. We know no better, appreciations of Hobbes ancl,Locke, .Berkeley. and Home. He provides us alsO with a valuable survey of nineteenth-century philOsophy,. with AS baffling, _gross-currents.. Nothing. could be ,mere disprinrinating.‘than, for example, the sketch ofrecent idealism from Ferrier and, Coleridge to Green and Cala, with its brilliant, new departure. in.Mr. F. H. Bradley. In his eoneleding chapter he., discusses the most recent developments; but the tiMe, line perhaps scarcely come to orientate .the Willtdt437ittnotti.eithd otiteroBeakilit .tho Phit000phil of Lilo. By Josiah Ik1V. • X.Oldcm Atiketoilas eiss ed. not —se) Nrtykoh opAar,a sitaiaartad 1,qattlivirv: LcSarlon 111. Dent and SoiSel.' ./ ".:q ; ' : . . . ; Work of. Mr. Russell or the English .pragmatists, The book_ • is admirably written with. a clearness and a grece that are rare hi histories ,of thought. If English philosophyis notably literature this historian. is not cleat:lent in the art of the man.. of letters.