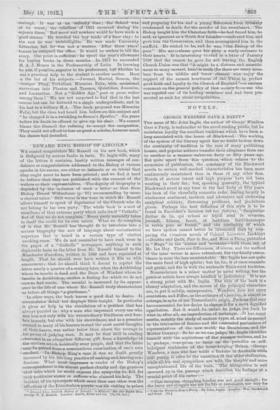 on his new book, which is disfigured by serious faults in taste. To begin with, many of the letters it contains, hastily written messages of con- dolence or eongratulations addressed to the. Bishop at various -epochs in hie•career, are either so intimate or so trivial that they ought never to have been printed; and we find it hard to believe that they are published with • the consent of the writers or their representatives. The dignity of biography is degraded by the inclusion of such a letter as that from Bishop 'Ernest Wilberforce (p. 95) recommending by name 'a:clerical tailor. Still worse is the tone in which Mr. Russell allows himself to speak of dignitaries of the Church' who do not belong to his own party. The whole book is a sort of manifesto of that extreme party which calls itself " Catholic." But of that we do notcomplain. - Every party naturiilly takes to itself the credit for its own saints. What we do complain of is that Mr. Russell has thought fit to introduce into a serious biography the sort of language about ecclesiastical superiors that is heard in a certain type of clerical smoking-room. We do not remember to have read, even in the pages of a " Catholic" newspaper, anything in such deplorable taste as the letter from Mr. Russell himself to the Manchester Guardian, written in 1889 and here reprinted at length. That lie should ever have, written it fills us with . amazement; that he should think it decent to reprint the -letter nearly a quarter of a century later, when the Archbishop whom he insults is dead and the Dean of Windsor whom- he insults is:Archbishop, excites a feeling for which we do not earn to find words. The scandal is increased by its appear. once in-the.life of one whom • Mr. Russell truly. characterizes as before all things•" a gentleman."

In other ways, the book leaves a 'good deal to desire. It accumulates detail -bet displays little insight. In particular it gives' no help in' the elucidation of a' problem that has always Puzzled us: why a man who impressed every one who met him:not Only with his 'extraordinary kindliness and fear. less honesty, but also with his shrewdness, and as a preacher eeemed to many of his hearers to.read the most secret thoughts of their hearts, was rather below than above the average in his Power of judging men. It may be that -skill in reading eharaelier is an altogether. different gift .from. a knowledge Of the motives mhieh habitually sway people, and that the latter .•may:be•gained from a cionseientione examination of one's own Aztuntshop: King's; ease- it was:no doubt greatly, increased by his life-long practice of maltinglendshearing.coh.: fessions. What mosts-finpresees '-a -reader of the Bishop's sjotrosplendenceis:--Itiii.elmost perfect charity and, the grecious 'Skill' 'With which he nould: express the sympatlayhe,' felt for each partievlareinner or stiffeter:who claimed his help. The inCident Of:hie-episcopate, Which More than any other won thd affectione of the Lincolnshire people' was his visiting in prison • • Kin„, Sixtieth Rishop of Lineola a MA'nioif.' .1133 the' Right lion. George W. E, Unseal. London: Smith. Eldor and Co. [7e, 01. net..1 and preparing for his,' find a young fisherman: frant 'G-ritnehy condemned to death for the murder of his Sweetheart.. The Bishop taught him the Chrietian fitith---she. had found him,: he said. as ignorant as affouth Sea Islandercenfirmed•hirri.atid gage him the Communion, and then aceompanied him to the scaffold. He wished to be, and he was, 'Sthe Bishop of the poor." His naturalness' gave 'Mir piety a' ready entrance to their hearts.' It is intereeting to read in a letter of '•January 1899 that the reason he gave for not leaving the Engli4 Church.Union was that "it'might be a distress. and •unsettle- merit to many earnest, bumble souls (for there are many- mem- bers from the middle and lower classes) who enjoy the support of the earnest heartiness of the, Union in perfect good faith and loyalty to the. Church of England "ssa curious comment on the general policy of that society frontene who was reputed one of its leading 'members' and had 'been Pro- secuted as such for