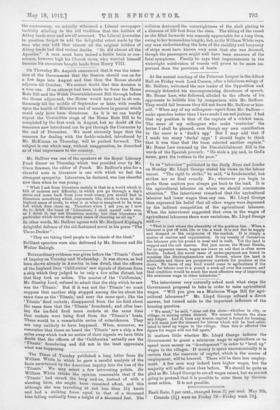 Page 3, 18 May 1912 — Extraordinary evidence was given before the 'Titanic ' Court of
Close

Extraordinary evidence was given before the 'Titanic ' Court of

Inquiry on Tuesday and Wednesday. It was shown, as had been shown already in America in less detail, that the officers of the Leyland liner ' Californian' saw signals of distress from a ship which they judged to be only a few miles distant, but that they took no action. The master of the ' Californian,' Mr. Stanley Lord, refused to admit that the ship which he saw was the ' Titanic.' But if it was not the Titanic' we must suppose that another ship stopped among the ice about the same time as the ' Titania,' and near the same spot; like the ' Titanic' fired rockets ; disappeared from the ice-field about the same time that the Titanic ' foundered; and after leav- ing the ice-field fired more rockets at the same time that rockets were being fired from the ' Titanic's ' boats. These would be a remarkable series of coincidences. They are very unlikely to have happened. When, moreover, we remember that those on board the Titanic' saw a ship a few miles away which took no notice of their signals we have little doubt that the officers of the Californian ' actually saw the Titania ' foundering and did not in the least appreciate what was happening.